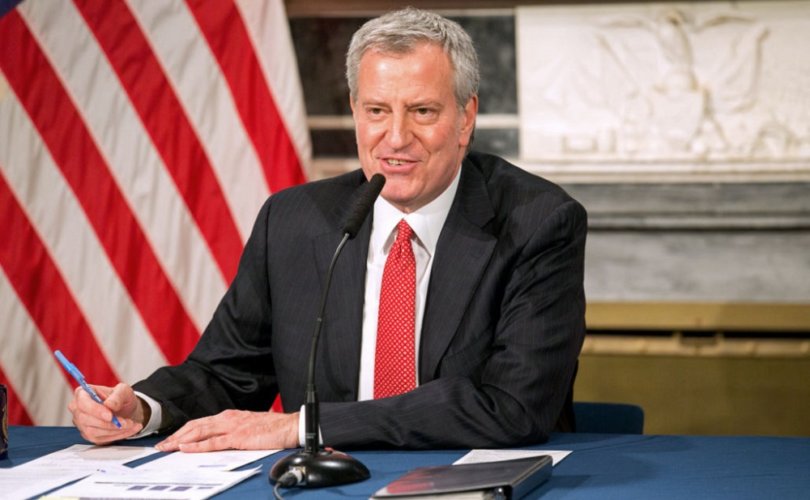 NEW YORK, March 30, 2020 (LifeSiteNews) — New York City mayor Bill de Blasio said on Friday that churches could be closed down permanently if people are gathering for services during the COVID-19 pandemic.

“I want to say to all those who are preparing the potential of religious services this weekend — if you go to your synagogue, if you go to your church and attempt to hold services after having been told so often not to, our enforcement agents will have no choice but to shut down those services,” de Blasio announced during a press conference streamed online.

“Again, I’m sorry I have to tell you this, but anyone who’s hearing this, take it seriously. You’ve been warned, you need to stop services. Help people practice their faiths in different ways, but not in groups, not in gatherings that could endanger people.”

The mayor said he understands “how important people’s faiths are to them, and we need our faiths in this time of crisis.” At the same time, he said, “we do not need gatherings that will endanger people.”

“No faith tradition endorses anything that endangers the members of that faith,” de Blasio said. “So, the NYPD, fire department, buildings department, and everyone has been instructed that if they see worship services going on, they will go to the officials of that congregation, they’ll inform them they need to stop the services and disperse.”

On March 29, the city of New York had reported more than 33,000 cases of COVID-19 and 776 deaths. Of those deaths, 624 had underlying conditions like diabetes, cancer, heart disease, hypertension, and asthma. Almost 8.4 million people live in the city.

Strong Catholic leaders have pointed out that Mass is as essential as food and drink.

Bishop Athanasius Schneider said a priest, using discretion and following the necessary health precautions, is free to disobey “the directives of his bishop or the government to suspend Mass for the faithful.”

“Such directives are a pure human law; however, the supreme law in the Church is the salvation of souls,” said the auxiliary bishop of the Archdiocese of Mary Most Holy in Astana, Kazakhstan, in an interview with traditional Catholic newspaper The Remnant.

He also gave some practical advice, explaining how to observe safety measures while still having Masses said in public. “For example, before each Mass one could disinfect the pews and doors, and everyone who enters the church could disinfect their hands. Other similar measures could also be taken. One could limit the number of participants and increase the frequency of Mass celebration.”

“We can provide more opportunities for the Holy Mass and devotions at which a number of faithful can participate without violating necessary precautions against the spread of contagion. Many of our churches and chapels are very large. They permit a group of the faithful to gather for prayer and worship without violating the requirements of ‘social distance,’” Burke continued.

“If a church or chapel does not have a sufficiently large staff to be able to disinfect regularly the pews and other surfaces, I have no doubt that the faithful, in gratitude for the gifts of the Holy Eucharist, Confession, and of public devotion, will gladly assist,” he said.

Mayor de Blasio, while claiming to understand “how important people’s faiths are to them,” had already promised to partner with Planned Parenthood and other abortionists to help them expand their business in the city before being elected in 2013. He said he planned on helping abortionists find neighborhoods that lack convenient facility access and provide them with “city sponsored” space to set up shop.

Additionally, he pledged to help abortionists get rid of pro-life crisis pregnancy centers

In 2016, de Blasio issued an executive order allowing men to use women’s bathrooms and locker rooms, and vice versa. He called this privilege “a fundamental human right that should not be restricted or denied to any individual.”