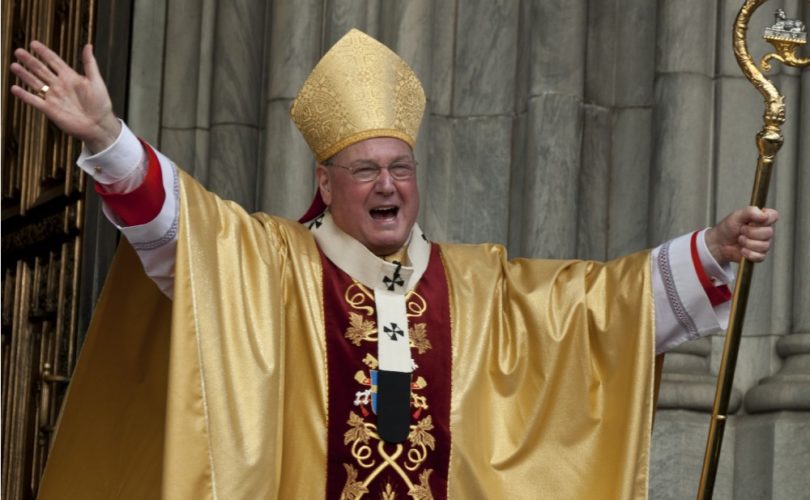 NEW YORK, February 17, 2015 (LifeSiteNews.com) — As if it wasn’t controversial enough that a homosexual activist group will be marching under its own banner in the New York St. Patrick’s Day parade led by New York Cardinal Timothy Dolan, the parade has refused a pro-life group’s request to participate.

When Cardinal Dolan was appointed Grand Marshal of the parade, he excused the decision to allow [email protected] to march under their banner by saying they were merely Catholics who were homosexually inclined, rather than advocates for sinful behavior.  The group, however, is an overt promoter of same-sex ‘marriage.’

The controversy heightened January 22, though, when the parade officially rejected a pro-life adoption advocacy group’s application to march this year.

“It’s absolutely been a double-cross,” Dr. Elizabeth Rex, president of the Children First Foundation (CFF), told LifeSiteNews. Not only was the group refused, they had to get a lawyer to pursue the parade committee to find out the result of their application. And even then the parade committee waited until the very last day before the launch of legal action to respond.

When the parade committee announced in September that the homosexual group could march in the 2015 parade, it came with a policy change allowing groups to march under their own banner, which organizers called a “gesture of goodwill” toward the LGBT community.

But the change in policy was supposed to also mean a pro-life group could march, and after many months, and this year’s parade looming, one has yet to be announced.

Rex’s pro-life group first applied to march in the 2015 parade last September, just after the policy change was made known.

The controversy with the parade committee’s allowance of the homosexual group to march in the parade was compounded last fall when New York Cardinal Timothy Dolan deviated from his predecessors, who had stood firm in regard to Church teaching as it relates to the Irish Catholic-themed parade, by saying he had no problem with the decision, and in fact, calling it a wise one.

Catholics worry that the media will use the approval of the homosexual activist group by Dolan and the parade organizers to undermine Church teaching on marriage, especially by playing up Dolan’s participation in the parade.

At least one Catholic leader initially gave parade organizers a pass on the decision allowing the homosexual group in the parade.

Catholic League President Bill Donohue had said he was consulted by the parade committee prior to its announcement that the homosexual activist group could march with its banner in the 2015 parade, and he told them he could only support the decision if there were an official revision in the parade's rules on marching units.

“That won’t be happening,” Lahey said. “What we want to do is keep 2015 focused on the gesture of goodwill we made towards the gay community with the inclusion of [email protected]”

The Wall Street Journal reported September 11 that parade spokesman William O’Reilly said a pro-life group would be allowed to march as part of a “deal” to permit the homosexual group to march.

Not long after the September parade committee decision, the Catholic League, a longtime parade participant, pulled out of the parade.

Donohue, who had also stood by the cardinal’s decision to be Grand Marshal, told Newsmax that the Catholic League would never march again because parade organizers had “double-crossed” him.

“To be specific, I asked them to pledge that a pro-life Catholic group would also be permitted. I was told that a formal change in the rules had been approved and that a pro-life group would march,” Donohue said at the time. “Now I am being told that the list of marching units is set and that no pro-life group will march in next year's parade. Accordingly, I have decided to withdraw our participation.”

“The gays made the cut and they said no to the pro-lifers,” Donohue said.