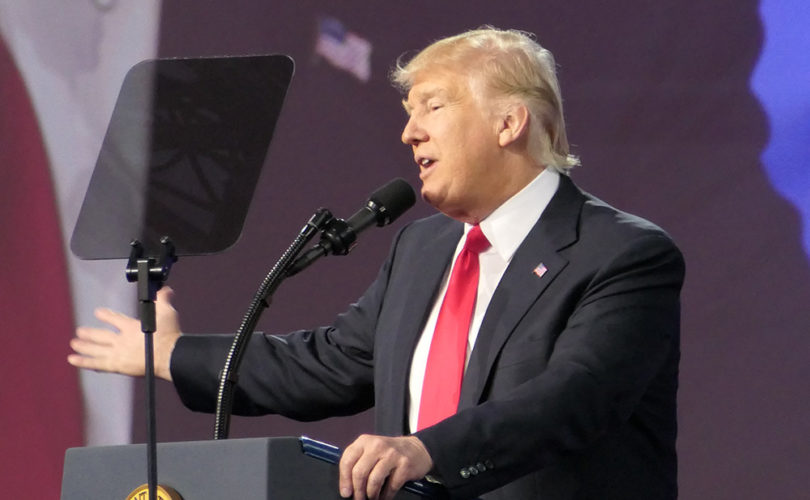 Katherine Stewart, author of “The Power Worshippers: Inside the Dangerous Rise of Religious Nationalism,” published a piece in NYT on Friday which was originally headlined “The Road to Coronavirus Hell Was Paved by Evangelicals.”

That headline has now been changed to “The Religious Right’s Hostility to Science Is Crippling Our Coronavirus Response,” with Stewart expressing her approval of the change, describing the new headline as “more precise.”

The text immediately below the headline asserts that “Trump’s response to the pandemic has been haunted by the science denialism of his ultraconservative religious allies” with Trump pictured smiling at a prayer event with evangelical Christians.

Stewart’s opening paragraph features a generalization of Trump supporters, arguably reminiscent of Hillary Clinton’s infamous description of half of Trump’s supporters as belonging in a “basket of deplorables” during the 2016 presidential election campaign.

“Donald Trump rose to power with the determined assistance of a movement that denies science, bashes government and prioritized loyalty over professional expertise,” she opines, before informing readers that “in the current crisis, we are all reaping what that movement has sown.”

Stewart then takes aim at a handful of Christian churches who have continued to encourage congregants to attend and, according to the article, appear to be spurning so-called social distancing recommendations. One of the church leaders mentioned in Stewart’s piece, Rodney Howard-Browne, the Pentecostal pastor at the River at Tampa Bay Church in Riverview, has today had a warrant issued for his arrest.

Paul Bois, writing at the Daily Wire, points out that “one can easily cite such examples on the left” pointing out a tweet from New York Health Commissioner Oxiris Barbot back in February, encouraging people to attend the Lunar New Parade in New York City’s Chinatown “and not change any plans due to misinformation spreading about #coronavirus.”

Today our city is celebrating the #LunarNewYear parade in Chinatown, a beautiful cultural tradition with a rich history in our city. I want to remind everyone to enjoy the parade and not change any plans due to misinformation spreading about #coronavirus. https://t.co/bwCnIb7j8H

While Stewart notes in her piece that “[n]ot every pastor is behaving recklessly” she nevertheless continued to make further links between Christians and poor management of the coronavirus pandemic.

“February 2020 will go down in history as the month in which the United States, in painful contrast with countries like South Korea and Germany, failed to develop the mass testing capability that might have saved many lives,” she claims. “Less well known is the contribution of the Christian nationalist movement in ensuring that our government is in the hands of people who appear to be incapable of running it well.”

To make her case that a “Christian nationalist movement” has ensured that the U.S. government “is in the hands of people who appear to be incapable of running it well” Stewart first highlights Alex Azar, the Secretary of the Department of Health and Human Services.

Stewart asserts that Azar has had “a prominent role in mismanaging the crisis,” and places alongside that claim Azar’s description of his department as “the Department of Life,” his sponsoring of a Bible study group attended by members of Trump’s cabinet, and what she describes as “a commitment to anti-abortion politics, abstinence education and other causes of the religious right.”

Stewart goes on to assert that “the failings of the Trump administration in the current pandemic are at least as attributable to its economic ideology as they are to its religious inclinations,” but even in this regard she claims that “Christian nationalism played a major role in creating and promoting the economic foundations of America’s incompetent response to the pandemic.”

Absent from Stewart’s article is any developed argumentation either that the Trump administration’s response to the coronavirus pandemic has in fact been incompetent – the closest she gets to that is her suggestion that the United States compares badly with South Korea and Germany in terms of its testing regime – or that identifiable Christian principles have influenced such a poor response.

Political and social commentator Rod Dreher has said that the original headline of Stewart’s piece was “primed to stoke anti-Christian bigotry.”