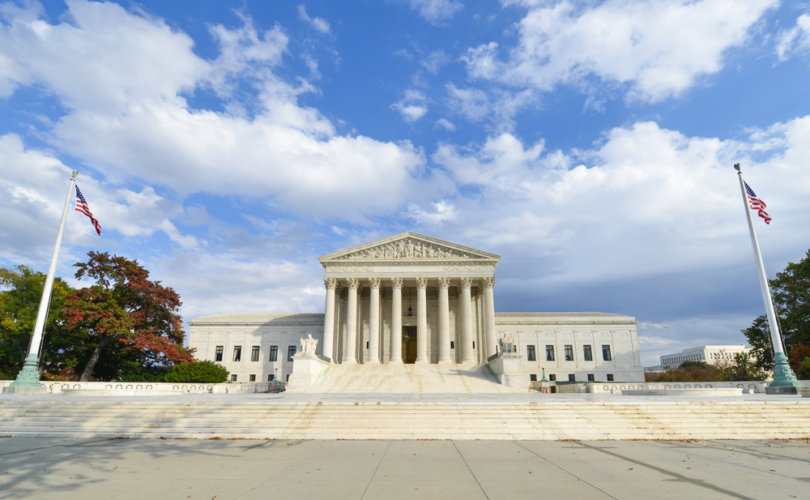 April 19, 2016 (Cardinal Newman Society) — The federal government recently admitted in a brief to the U.S. Supreme Court that it does not need to force religious objectors to provide contraceptive coverage as part of the HHS mandate, meaning a Court victory for Catholic colleges and schools, and others challenging the mandate, could be in sight, according to Becket Fund for Religious Liberty senior counsel Mark Rienzi.

“The government has now admitted ‘yes, we can get people contraceptives without involving nuns,’” said Rienzi in a recent press call discussing the briefs requested by the Court last month. “That’s a pretty logical point. It shouldn’t have taken five years of litigation to admit that, but it’s good that they have admitted it. And now it’s a pretty easy path to consensus for the Court.”

In a surprise twist last month, the Supreme Court asked both the government and petitioners against the HHS contraception/abortifacient/sterilization mandate to submit additional briefs. The briefs, according to the Court’s request, were meant to explain ways in which the objectionable coverage could be provided to employees while also preserving the religious freedom of employers — including Catholic colleges, schools and nonprofits — seeking to live out their sincerely held beliefs.

A total of seven cases challenging the mandate were consolidated in Zubikv. Burwell, most notably the Little Sisters of the Poor’s case, but also challenges from Thomas Aquinas College (TAC) in Santa Paula, Calif., and The Catholic University of America (CUA) in Washington, D.C. — both recommended as faithful Catholic colleges in The Newman Guide to Choosing a Catholic College. The co-plaintiffs involved in the seven respective cases submitted a joint brief last Tuesday which detailed possible alternatives preserving their religious freedom.

The joint brief was rather straightforward, noted Rienzi, who also teaches constitutional law and religious liberty at CUA. The co-plaintiffs told the Court that there are certainly ways to provide contraceptive coverage without making religious organizations complicit in the process.

“The claim has always been ‘I just can’t be involved, you can do whatever you want but you have to leave me out of it,’” Rienzi explained, adding that any involvement from religious objectors would necessarily make them complicit in providing, or at the very least facilitating, the coverage. As it currently stands, the government’s supposed “accommodation” would require the religious objectors to notify the insurers of their objection via the EBSA 700 or equivalent form.

Thus the accommodation merely plays lip service to religious freedom protections and is no more than “window dressing,” The Cardinal Newman Society has argued, as objectors would be effectively telling the insurers to provide the coverage. Similarly, Ave Maria University argued that the accommodation is analogous to Pontius Pilate’s condemnation of Jesus, meaning that you can symbolically wash your hands of the situation but that does not rid you of your moral culpability in sanctioning the action.

The key issue is to make sure that any contraception, sterilization or abortifacient coverage is completely separate.

“If it’s really truly separate from us, that’s fine,” Rienzi explained. Whether it’s dental or vision or some other coverage, people have separate coverage all the time, he said. There are ways to offer contraceptive coverage without involving religious organizations, and if the government goes ahead and does that then that will solve the current religious freedom issues.

“We’ve actually always been saying yes to things that are truly separate. And from our point of view, the government just really needs to take yes for an answer here,” Rienzi added.

Not only have the plaintiffs submitted excellent alternatives that would preserve their religious freedom, but the government has finally admitted that these alternatives are possible, Rienzi stated in the press call.

“The government’s [brief] was less straightforward,” he said. At times, it seemed the government was suggesting that the Court’s request for an alternative was not feasible, but ultimately and reluctantly it admitted that the contraceptive accommodation could be modified, he added.

“They do come out and say, ‘yes, Court, you could do this,’” Rienzi said. “That’s good news because that gives the Court a pretty clear path to consensus.” Now that the government has admitted that they can do this, federal civil rights law such as the Religious Freedom Restoration Act (RFRA) requires them to do it other ways. “That really shouldn’t be that big of a problem given that a 100 million other people are already exempt from the mandate,” said Rienzi.

As recently noted by the National Catholic Register, that “striking admission, accompanied by a lot of grumbling, raised a red flag.” The justices’ request “put the government in a bind,” said Stanford University law professor Michael McConnell in an April 13 blog post at the Washington Post. “If it answered ‘yes,’ it would effectively be admitting to a RFRA violation. But if the government said ‘no,’ it would be appearing unwilling to work with the Court on a solution that will satisfy both sides.”

The government has never had a valid reason for forcing religious organizations, colleges and nuns to provide coverage that directly opposes their religious belief, and their latest brief confirms this, Rienzi said. If the government’s interest is truly about providing coverage to women who need it, then it is time to say yes to the proposed alternatives and find away to do so without involving religious organizations.

In recent weeks, Catholic education leaders agreed that while they are not in favor of the government’s contraceptive policy, they will continue to fight on all fronts to protect their religious freedom.

“While we strongly disagree with the government’s policy on this matter, we are pleased that the court appears to be looking for a way to insure that religious organizations do not have to be complicit in providing objectionable insurance coverage,” said TAC President Michael McLean in a press release issued to the Newman Society. “The key point is that there are alternatives — and none of them require an objecting religious institution to be in any way part of the delivery method.”

“I think this is cause for cautious optimism,” said CUA President John Garvey in an Easter message on April 1, referring to the Court’s request for supplemental briefs. “It suggests that the Court understands, and may agree with us, that the government’s ‘accommodation’ for religious institutions like Catholic University still involves us in providing services we believe gravely wrong.”

Both the government and the co-plaintiffs have until April 20 to file replies in response to the other sides supplemental brief. A decision from the Court on the fate of the HHS mandate is expected to be handed down at the end of their session in June.