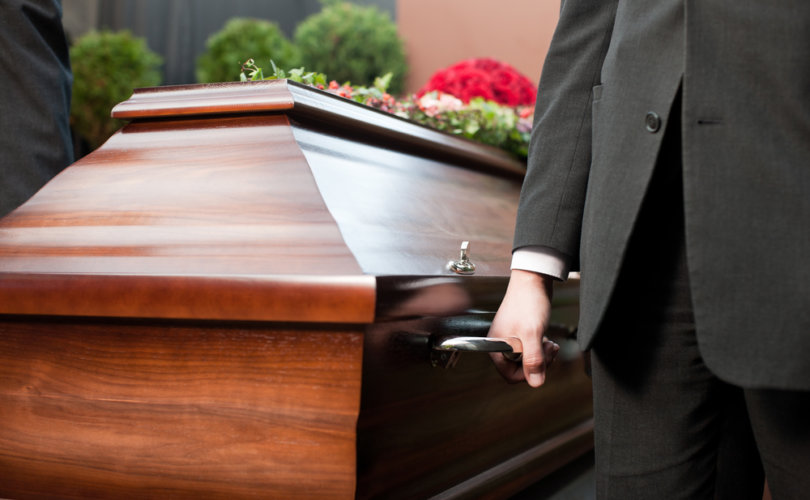 DETROIT, August 19, 2016 (LifeSiteNews) – The Obama administration has been handed a significant legal loss, as a federal judge ruled that it could not force a Christian business owner to employ a transgender man who dresses as a woman. The judge's decision also questioned the administration’s reason for filing the lawsuit.

The Obama administration’s Equal Employment Opportunity Commission (EEOC) sued a Detroit-area funeral home that would not allow an undertaker to dress as a woman while interacting with grieving customers.

In 2006, R.G. & G.R. Harris Funeral Home in Garden City hired Anthony Stephens as an undertaker. As part of the process, he agreed to abide by its dress code of white shirts and dark suits for men.

But in July 2013, Stephens wrote a letter to his employer saying that he would begin dressing as a female at work and would now be known by the name Aimee. He was subsequently fired.

The EEOC said that action violated the 1964 Civil Rights Act’s prohibition of sex discrimination, “because the employee does not conform to the employer's expectations or stereotypes regarding how someone 'born’ that sex should live or look.”

Instead the EEOC had violated the owner’s religious liberty, Judge Cox, a 2006 George W. Bush appointee, wrote in a 56-page ruling on Thursday.

He wrote, while the government would likely prevail on the Title VII case due to subsequent case law that went beyond the law’s wording, it violated the 1993 Religious Freedom Restoration Act (RFRA) and ignored the Supreme Court’s ruling in the Hobby Lobby decision.

The funeral home’s majority owner, Thomas Rost, said in an affidavit that allowing a man to dress as a woman in his business would violate God’s commandments, because he “would be directly involved in supporting the idea that sex is a changeable social construct rather than an immutable, God-given gift.”

Rost, who was once a Baptist deacon and sits on the board of the Detroit Salvation Army, said if he were forced to comply, he would “feel significant pressure to sell” his business and give up his “life’s calling.”

RFRA requires the government to use the least restrictive means possible. “The EEOC has not even discussed the possibility of any such accommodation or less restrictive means as applied to this case,” Judge Cox wrote.

He also questioned the Obama administration’s motives in bringing the case to court. The Obama administration “has not challenged the funeral home’s sex-specific dress code,” which requires suits of men and skirts for women, the judge wrote. “If the EEOC were truly interested in eliminating gender stereotypes as to clothing in the workplace, it presumably would have attempted to do so.”

The ACLU, in an amicus brief, said the notion of protecting religious liberty in employment decisions is “staggering.”

But constitutionalists say the case is a victory for freedom of conscience over an intrusive federal government.

“The government must respect the freedom of those who are seeking to serve the grieving and vulnerable,” said Doug Wardlow, an attorney with the Alliance Defending Freedom, who argued the case in court last Thursday.

“The feds shouldn’t strong-arm private business owners into violating their religious beliefs, and the court has affirmed that here,” he said. “They shouldn’t be forced into violating their deepest convictions.”
The EEOC filed a similar case against Lakeland Eye Clinic in Florida on the same day. The clinic chose to pay a $150,000 settlement and adopt new gender identity discrimination policies to end the case last April.