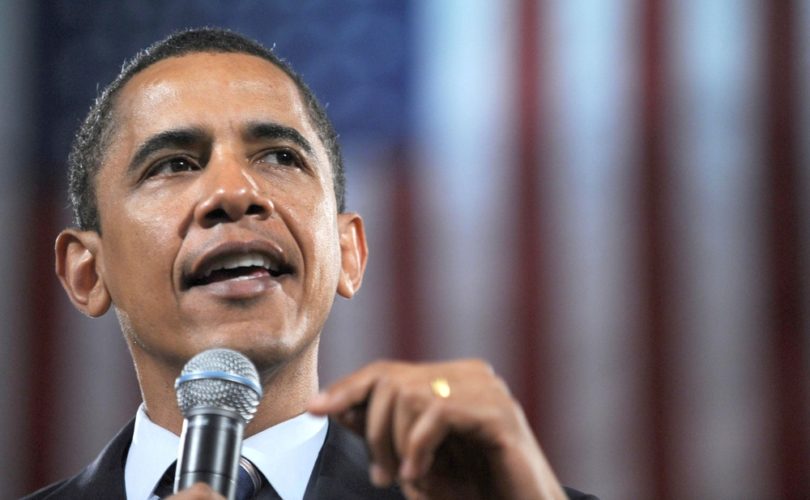 “I'm announcing today that we're ending the ban on transgender Americans in the United States military,” said Obama's Defense Secretary Ash Carter in a press conference held at the Pentagon this afternoon, on the last day of LGBT Pride Month. “Effective immediately, transgender Americans may serve openly, and they can no longer be discharged or otherwise be separated from the military just for being transgender.”

The notion of open transgender military service is “embedded” in our national creed, which is that “all Americans are free and equal.”

On a more practical level, Carter noted that the military will begin paying for gender reassignment surgery and hormonal transitions by October, a policy change that he felt righted a national injustice.

“Right now, most of our transgender service members must go outside the military medical system in order to obtain medical care that is judged by doctors to be medically necessary, and they have to pay for it out of their own pockets,” Carter said. “This is inconsistent with our promise to all our troops that we will take care of them and pay for necessary medical treatment.”

Taxpayers will absorb the price of sex change operations, which range from a low estimate of $7,000 to $24,000 to more than $50,000 each, not including additional hormonal therapy or surgical reconstruction. Some centers that specialize in gender reassignment charge more than $100,000 for a combined transition package.

The RAND Corporation estimated there are between 1,500 and 7,000 transgender soldiers in active duty, while the San Francisco-based Palm Center places the number at more than 15,000.

Carter quoted the RAND report that the overall cost will be “'an exceedingly small proportion' of the military's overall [medical] expenditure.”

Those who identify as transgender may begin enlisting next July. Secretary Carter affirmed that the U.S. government will pay for “medically necessary” gender reassignment surgery and hormonal treatments for new recruits, as well.

Official guidelines require that a service member has been “stable” in his or her gender identity for at least 18 months before transition will be covered.

Employers paying for their employees' gender transition “is becoming normalized,” Carter said, noting that the number of Fortune 500 companies that cover such services soared from zero in 2002 to one-third today.

The new policy would be implemented over one year. However, military leaders have just 90 days to create the new policies for existing service members and a detailed plan for their implementation.

The short time line has drawn significant, often necessarily anonymous, pushback from within the ranks of the enlisted. Army Chief of Staff Gen. Mark Milley and Marine Commandant Gen. Robert Neller both contrasted the hasty implementation of this policy with the end of the ban on open homosexual soldiers, which lasted years.

Today's announcement is the culmination of a process that began just last July, when Secretary Carter tasked a working group to “start with the presumption that transgender persons can serve openly without adverse impact on military effectiveness.”

It drew immediate backlash from some veterans who are now free to openly criticize the president.

“This has everything to do with President Obama's social agenda for the military, but it has nothing to do with enhancing military readiness. No new science has led to the Pentagon's transgender study—only the politics of the Obama administration and the transgender movement,” said Lt. Gen. (ret.) Jerry Boykin, who is now executive vice president of the Family Research Center. “Defense Secretary Carter has failed to explain how this new policy makes our military more capable of winning wars.”

Rep. Mac Thornberry of Texas, chairman of the House Armed Services Committee, said the administration has dodged his questions about the impact on military readiness, and additional costs, for more than a year.

Today's policy announcements mark the third transformation of the military for social purposes during Barack Obama's two terms as president.

Obama presided over the abolition of the Clinton-era “Don't Ask, Don't Tell” policy barring homosexuals from open service in the armed forces. Carter today said the education programs designed to normalize homosexuality in the ranks of enlisted men could be a model for the new transgender policy. The materials, presented to soldiers in Afghanistan in 2011, said, “There is nothing wrong with 'hanging around' a gay bar” and that a soldier who sees two men kissing “should react as if he were seeing a man and woman,” according to a description from the Associated Press.

“We do have some experience in this kind of thing,” Carter said during today's press conference.

“Our mission is to defend this country, and we don’t want barriers unrelated to a person’s qualification to serve preventing us from recruiting or retaining the soldier, sailor, airman or Marine who can best accomplish the mission,” Carter said. “We have to have access to 100 percent of America’s population.”

But FRC President Tony Perkins said this had nothing to do with military readiness.

“This is yet another example of President Obama using America's military to fight culture wars instead of to fight real wars against the enemies of our nation,” he said.