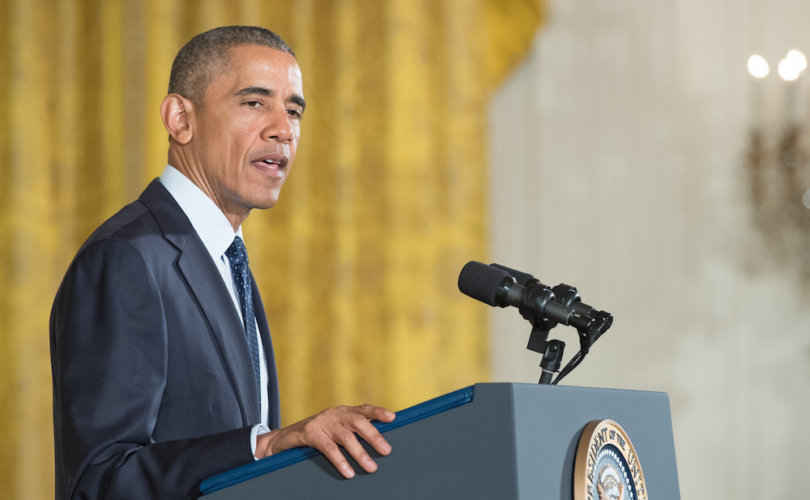 CHARLOTTE, July 6, 2016 (LifeSiteNews) – The Obama administration has sued to stop North Carolina from enforcing a state law barring members of one biological sex from using the restrooms or intimate accommodations of the opposite sex, saying that doing so “causes significant and irreparable physical, psychological, economic, social, and stigmatic harm to transgender people.”

The complaint states that relying upon biology to determine a person's sex is “medically inaccurate,” and says that repealing H.B. 2 will have no impact on sexual assault, because rape is already illegal.

The administration is seeking a preliminary injunction against the state's H.B. 2 law, which requires people to use the restroom of the sex that is listed on their birth certificate.

That amounts to “state-sanctioned discrimination that is inflicting immediate and significant harm on transgender individuals,” the Justice Department stated in a 70-page legal complaint filed on Tuesday.

Although the Obama administration sued the state on May 9, it filed a new brief after state lawmakers last week passed a tweak to the law, which the North Carolina Values Coalition dismissed as a “minor technical correction.” Its restroom privacy provisions remained unchanged.

The Justice Department notes that at least four states don't allow birth certificates to be changed, since a later medical process does not change a child's sex at the moment of birth.

But defining sex based “exclusively on anatomy” is “medically inaccurate,” according to its complaint.

“Both science and the Fourth Circuit [Court of Appeals] recognize, an individual’s sex consists of multiple factors, which may not always be in alignment,” the Justice Department states. “There is, therefore, no basis for privileging anatomy as the sole basis for determining sex.”

The administration denies its guidelines allow a person to change gender identity “on a whim,” although the federal guidance relating to public schools' and universities' restroom, shower, and dorm room/overnight field trip accommodations specifically state “there is no medical diagnosis or treatment requirement that students must meet as a prerequisite to being treated consistent with their gender identity.”

The controversial guidance does not specify a maximum number of times a student may change his or her gender identity, nor any minimum time period that must elapse between changes.

The Obama administration cautioned the court against vetting its assertion that the law inflicts an array of harms, physical and psychological, on transgender people. “This court need not engage in a factual inquiry as to irreparable harm; rather, the United States is entitled to a presumption of irreparable harm when it seeks to enjoin the violation of a federal civil rights statute,” the Obama administration states.

Aside from the bill's policy implications, its “message itself causes harm.”

The revised law constitutes “unlawful sex discrimination” under “the Department of Education’s interpretation of its Title IX regulations,” the DOJ states, citing a recent decision from a federal appeals court upholding the administration's innovative application of the law.

The 1972 Title IX law, designed to reduce discrimination against biological women especially in a university setting, contains no language regarding transgender status. However, the Obama administration has been enforcing civil rights laws as though they apply to homosexuals and transgender people since early in its first term.

The administration also says H.B. 2 breaks Title VII of the 1964 Civil Rights Act, which bars discrimination based on biological sex but not gender identity, and the Violence Against Women Act.

“The likelihood that Congress did not contemplate Title VII’s application to transgender people at the time of enactment does not outweigh the many cases holding that discrimination against a transgender person constitutes sex discrimination,” such as the Fourth Circuit ruling, the complaint states.

Its legal brief denies concerns that sexual predators will exploit the new legal landscape to victimize women, because such “behavior is illegal regardless of the existence or nonexistence of H.B. 2.”

Pro-family leaders in the state say the law is necessary to protect women and children from voyeurism and possible molestation in sex-segregated private facilities, and the lawsuit harms innocent people.

“The Justice Department has no concern for women or children,” the North Carolina Values Coalition said. “They only seek to advance a political agenda.”