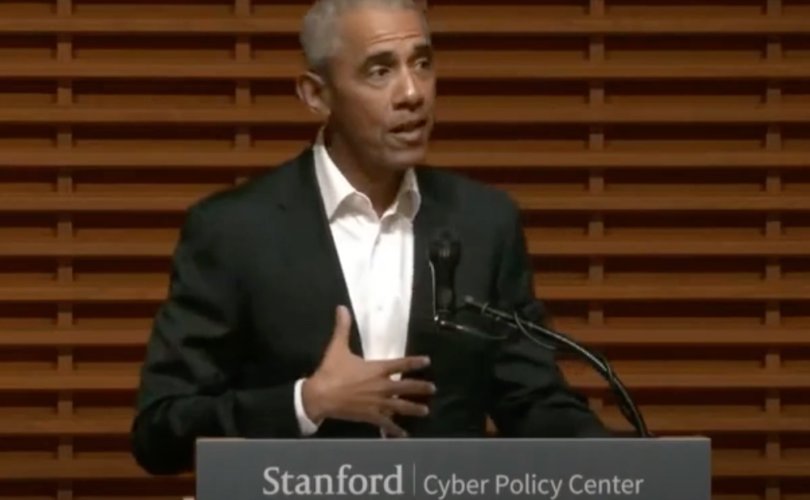 WASHINGTON, D.C. (LifeSiteNews) — A former U.S. president has admitted that the COVID vaccines have been “clinically tested” on the world’s population.

“The fact that scientists developed safe, effective vaccines in record time is an unbelievable achievement,” Obama said yesterday during a speech at Stanford University.

“Yet despite the fact that we’ve now, essentially, clinically tested the vaccine on billions of people worldwide, around one in five Americans is still willing to put themselves at risk and put their families at risk, rather than get vaccinated.”

“People are dying because of misinformation,” he claimed, ignoring the recently released data from Pfizer documents about vaccine deaths and injuries. As LifeSiteNews has reported and Dr. John Campbell explains in detail, there were 42,086 adverse events and 1,223 deaths reported in the first three months after Pfizer’s COVID-19 vaccine was approved under emergency use authorization (EUA).

Obama’s comments reveal that even vaccine advocates are now recognizing the experimental nature of the COVID-19 vaccine rollouts despite downplaying or ignoring this fact when defending mandates. The refusal to acknowledge the adverse effects was mirrored by the Biden administration in its recent plan for a second global COVID “summit” with world leaders, set for May 12, to “make new commitments and bring solutions to vaccinate the world.”

The White House called for “world leaders, members of civil society, non-governmental organizations, philanthropists, and the private sector to make new commitments and bring solutions to vaccinate the world, save lives now, and build better health security — for everyone, everywhere.”

This summons comes from Washington, D.C. despite the fact that, as LifeSite has reported, “CDC and U.K. government data have indicated that the COVID-19 vaccines not only are ineffective in preventing cases and transmission, they rapidly lose protection against severe illness or death while posing risks.”