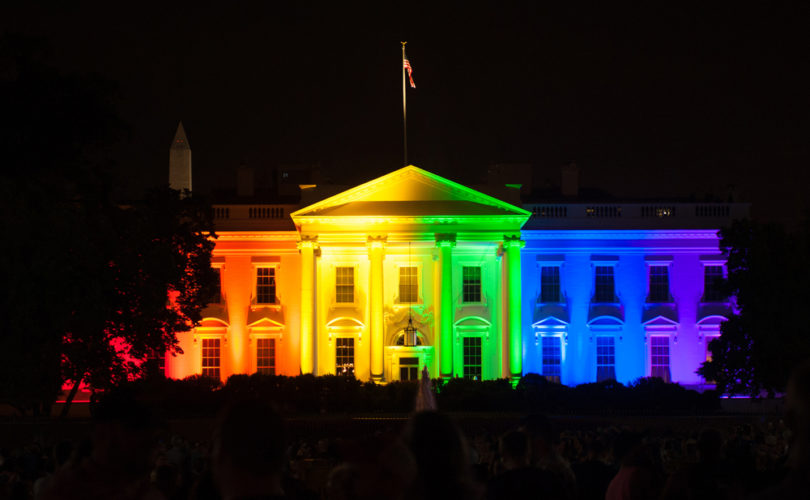 “Upon that review it is now clear that the administration strongly supports the Equality Act,” White House Press Secretary Josh Earnest announced on Tuesday. “That bill is historic legislation that would advance the cause of equality for millions of Americans.

“We look forward to working with Congress to ensure that the legislative process produces a result that balances both the bedrock principles of civil rights…with the religious liberty that we hold dear in this country,” said Earnest.

The bill was introduced in July in the Senate by Democratic Senators Jeff Merkley of Oregon, Tammy Baldwin of Wisconsin, and Cory Booker of New Jersey, and in the House by Rep. David Cicilline of Rhode Island.

LGBT advocates are praising the bill, which is considered to be a long-shot with GOP control of Congress. The Human Rights Campaign (HRC), a homosexual lobby group that backs the bill, cited several major companies that also stood behind it, including Apple, Dow Chemical Company, IBM, General Mills, Levi Strauss & Co, Microsoft, Orbitz, Symantec and Target.

However, Andrew Walker, the director of policy studies for the Southern Baptist Convention’s Ethics and Religious Liberty Commission, says it's dangerous to religious liberty.

“There is no compelling reason to deny a gay individual access to his or her favorite restaurant. It is nonsensical to prevent a gay individual from purchasing batteries or being treated at a hospital. But that isn’t what the Equality Act attempts to fix, because those problems are extreme, and so rare as to be virtually nonexistent,” Walker wrote at The Public Discourse on July 24.

“The Equality Act instead paves over the consciences of those who cannot in good faith condone conduct they believe to be immoral by providing services for a same-sex wedding ceremony. Again, such conflicts arise not over the personhood and dignity of an LGBT customer, but over participation in particular conduct that some find morally unacceptable,” he wrote.

Likewise, Cardinal Newman Society President Patrick Reilly told LifeSiteNews that it wasn't surprising that the president would back a bill reducing religious liberty. “The Obama administration has repeatedly promised to respect religious freedom, going all the way back to President Obama's infamous commencement address at Notre Dame, where he promised to work with us and find a middle ground. He's done nothing of the sort.”

“And, so, to trust the Obama administration on religious liberty is about as naive as one could get at this point.”

The act is similar to state and local level laws that have limited the religious liberty of business owners and others who believe that sexuality is unchangeable and marriage is between a man and a woman. Several of those laws have led to government-sanctioned harassment of business owners, while last week voters repealed a similar law in Houston.

Among its measures, the bill strips away religious liberty rights clarified by the Religious Freedom Restoration Act, stating that the 1993 law “shall not provide a claim concerning, or a defense to a claim under, a covered title, or provide a basis for challenging the application or enforcement of a covered title.”

According to Walker, this means the bill “goes out of its way to strip away any notion of religious liberty by audaciously stipulating that the Religious Freedom Restoration Act (RFRA) cannot be appealed to by individuals, businesses, educational institutions, or religious institutions.”

“Were this bill to become law, traditional Christian, Jewish, and Muslim sexual morality would immediately be treated as suspect and contrary to federal law,” he continued. “This breathtaking attempt to relocate historic religious belief outside the bounds of polite culture is unacceptable and would have negative consequences for millions of Americans.”

Reilly said the act “redefines what a public accommodation is,” and “would essentially bring religious schools under that definition, and there would be absolutely no protections for religious schools.”

“Not only does it not include protection [for religious entities], but it actually, expressly, prevents any sort of RFRA claims against any of the provisions” of the act, he said.

HRC did not immediately respond to attempts to clarify the Religious Freedom Restoration Act implications of the bill and how the bill would affect educational institutions.