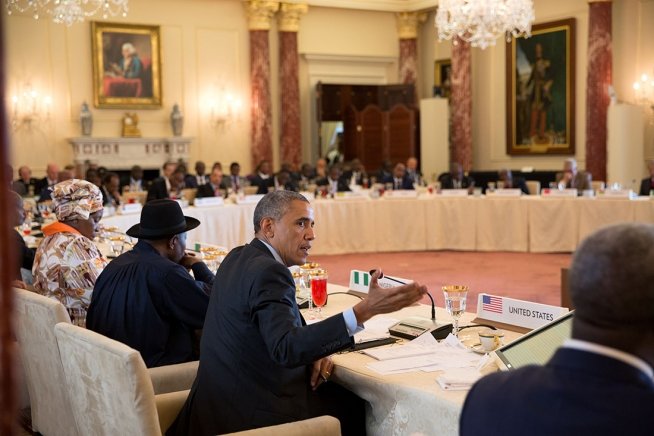 Neither the Ebola outbreak nor the ongoing Boko Haram crisis in Nigeria prevented U.S. President Barack Obama and Vice President Joe Biden from raising the issue of homosexuality during last week’s U.S.-Africa Leaders Summit in Washington. The American leaders, along with other current and former Obama administration officials, capitalized on economic concerns to encourage African leaders to expand legal protections and privileges for homosexuals and call for cultural acceptance of homosexuality.

Asked repeatedly by African leaders what the continent’s largely war-torn, impoverished nations can do to promote economic growth and development, Obama and Biden both said African countries need to make themselves more gay-friendly if they want to attract more aid, talent, and investment from Western nations.

“There are certain common ingredients to success in the 21st century that have become self-evident,” Vice President Biden said in a speech August 5.  “The need for economic integration; a court system that adjudicates disputes fairly.  A commitment to invest in all of a society’s people and respect their rights, because countries that respect citizens’ equal rights no matter what their gender or religion, no matter who they love, tend to be the … most attractive to attracting international talent and international investment.”

“Unfortunately, there’s been an obsession by some within the administration — and that goes for the president himself — to promote the abortion agenda and the LGBT agenda in our foreign policy.”

During a Q&A session, President Obama recommended that government leaders and business leaders alike model themselves on the open-mindedness of the West when it comes to homosexuality.

“Some of the incredible cultures of some of our U.S. businesses that do a really good job promoting people and maintaining a meritocracy, and treating women equally, and treating people of different races and faiths and sexual orientations fairly and equally, and making sure that there are typical norms of how you deal with people in contracts and respect legal constraints — all those things I think can then take root in a country like Zimbabwe or any other country,” Obama said.

“Hopefully, governments are encouraging that, not inhibiting that,” he continued. “They recognize that that’s how the world as a whole is increasingly moving in that direction.  And over time, you will see an Africa that is driven by individual entrepreneurs and private organizations, and governments will be responsive to their demands.”

Shawn Gaylord, of the Human Rights First homosexual activist group, praised the summit’s organizers for hosting “robust side events” focused on homosexual issues, but expressed disappointment that “these events were not widely attended by the leaders who most need to hear these messages.” Instead, he said, homosexual activists should have been specifically invited to participate in presidential-level discussions with world leaders and top business investors.

“The Obama Administration has unequivocally demonstrated global leadership on the human rights of LGBT people, and the president will leave a legacy for his engagement with international civil society,” Gaylord said in a statement. “That is why it is most disappointing that the White House chose to keep these issues literally on the margins in side events, and exclude civil society and human rights defenders from the same White House meetings corporate CEOs and investors were invited to.”

But Ned Price, a spokesperson for the National Security Council, insists that the Obama administration is as committed as ever to promoting gay rights overseas.

“The Obama Administration has long spoken out—including with our African partners—in support of universal human rights and fundamental freedoms for all, including lesbian, gay, bisexual, and transgender individuals,” Price said in a statement. “The Summit has provided an opportunity to continue these conversations.”

Given the cold reception Africans have given Obama’s overtures so far, it seems unlikely the continent will rush to follow his lead when it comes to bringing homosexuality into the mainstream.  Still, some observers are worried that as the economic costs of resistance mount, governments will weaken under the strain.

“I do think that, unfortunately, there’s been an obsession by some within the administration — and that goes for the president himself — to promote the abortion agenda and the LGBT agenda in our foreign policy,” said Rep. Chris Smith (R-NJ) on Family Research Council president Tony Perkins’ Washington Watch radio program last week.

“These issues are what drives this administration in much of our foreign policy in Africa,” Smith continued. “Many of these countries deeply resent it because they are profoundly pro-marriage and profoundly pro-life. But when your foreign aid is being limited or conditioned on those two issues, there are some, but thankfully not many, in these governments who begin to weaken.”

Both Obama’s and Biden’s comments echoed previous ultimatums issued by the U.S. and other Western governments concerning African nations’ approach to homosexuality.  Homosexual activity is illegal in the majority of African nations, and such bans enjoy overwhelming support from the people, who tend to be devout followers of either Christianity or Islam – both of which forbid homosexual behavior.

In recent years, Western nations have increasingly threatened to withdraw humanitarian aid from countries that fail to accept homosexuality as a valid, legally protected lifestyle, but African leaders have not taken kindly to their efforts.

During President Obama’s $100 million tour of the AIDS-ravaged continent last year, the president offended several heads of state by publicly denouncing their nations’ laws against homosexual behavior.  And in April, the African, Pacific and Caribbean Group of States (ACP) released a strongly worded resolution condemning wealthy Western nations for their repeated attempts to blackmail African nations into legalizing homosexual behavior by threatening to withhold charitable aid.

When United Kingdom Prime Minister David Cameron threatened to cut off aid to African countries that criminalize sodomy and other homosexual behavior, Ghananian President John Evans Atta Mills said his nation would rather go it alone than accept aid dependent upon the acceptance of behavior they know to be immoral and damaging.

“While we acknowledge all the financial assistance and all the aid which has been given to us by our development partners, we will not accept any aid with ‘strings attached’ if that aid will not inure to our interests, or [if] the implementation—or the utilization—of that aid-with-strings-attached would rather worsen our plight as a nation, or destroy the very society that we want to use the money to improve,” Mills said.

Likewise, Ugandan presidential adviser John Nagenda told the BBC that Ugandans were “tired of these lectures” and should not be treated “like children,” adding that Cameron’s “bullying mentality” was “very wrong.”

“Uganda is, if you remember, a sovereign state and we are tired of being given these lectures by people,” Nagenda told the BBC.  “If they must take their money, so be it.”

Following President Obama’s disastrous tour of Africa last year, Obianuju Ekeocha, the Nigerian founder of Culture of Life Africa, wrote an open letter to the president that seemed to sum up the way many African leaders feel about his attempts to “lead” the continent toward acceptance of homosexuality.

“In some parts of Africa, we are still trying to out-law odious practices like female genital mutilation, so please don’t try to persuade us to introduce yet another type of mutilation into our society,” Ekeocha wrote.

“In many parts of Africa we are still trying to recover from the deep wounds inflicted by the aberration of marriage which is polygamous marriage, please don’t tell us to take on yet another aberration of marriage which is same-sex marriage,” she continued. “In some other parts of Africa we are still mourning and counting the graves of young people lost to AIDS –a deadly disease rooted in wide-spread sexual perversion and depravity, so please do not encourage our leaders to enact laws that will raise altars to even more sexual depravity.”

“Africa wants to walk the path of authentic growth, development and stability. And this path is not paved in morally objectionable sexual ‘rights,’ but rather in authentic rights that promote human flourishing and common good,” she added.

President Obama has made advocacy for homosexual acceptance a central part of his foreign policy since at least 2011, when he asked U.S. embassies worldwide “to strengthen existing efforts to effectively combat the criminalization by foreign governments of LGBT [lesbian, gay, bisexual and transgender] status or conduct” and to expand efforts to combat “discrimination, homophobia, and intolerance on the basis of LGBT status or conduct.”

Obama’s secretaries of state, John Kerry and Hillary Clinton, both repeatedly said that promoting the homosexual agenda overseas was a “top priority” for U.S. foreign policymakers.