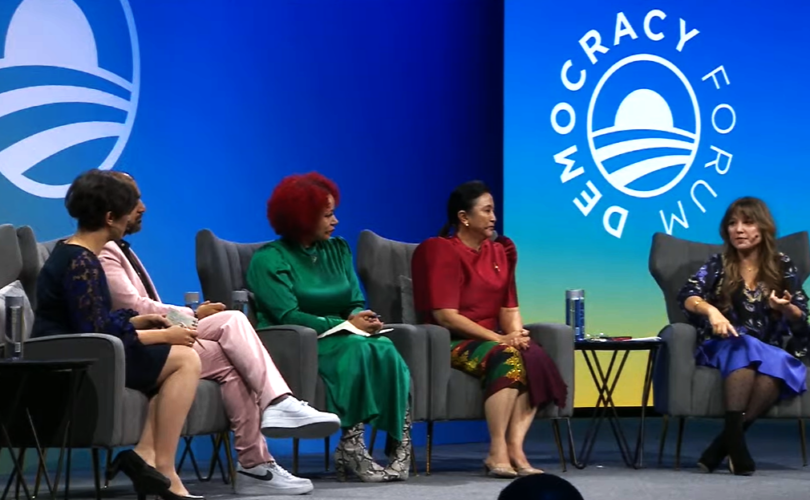 NEW YORK (LifeSiteNews) – An Obama Foundation panel on disinformation moderator has ties to the suppression of the Hunter Biden laptop story and once suggested that there is a need for a “commission” to govern “disinformation.” She also has alleged ties to misinformation from a 2017 special Senate election in Alabama.

The panel, which took place Thursday at the “Tackling Disinformation, Protecting Democracy” forum hosted by the Obama Foundation in conjunction with Columbia University and the University of Chicago, featured Renee DiResta, a disinformation researcher at Stanford University’s internet observatory, as panel moderator. DiResta has alleged ties to disinformation, the Daily Caller reported.

In 2017, DiResta acted as an adviser to American Engagement Technologies, which created fake Twitter accounts in an effort to suppress Republican votes for a special U.S. Senate election in Alabama. While DiResta denied involvement in the campaign, she was also involved with New Knowledge, a firm that participated in the same disinformation campaign.

DiResta was also a member of the Aspen Institute’s Commission on Information Disorder, which released a report last November that called for Congress and the White House to take steps to combat “misinformation.” The commission, which also criticized Twitter and other social media giants for failures to censor speech in its report, was funded by Craig Newmark. He previously funded a New York University study that defended Facebook and Twitter’s decision to suppress the Hunter Biden Story.

Hunter Biden’s laptop, which was originally dropped off at a computer repair store owned by computer repair man John Paul Mac Isaac in 2019, was labeled as Russian misinformation by mainstream media outlets and intelligence officials. However, mainstream outlets authenticated the contents of the laptop, which links Hunter Biden to shady business dealings with Ukrainian- and Chinese-owned businesses, in March, which LifeSiteNews previously reported. A whistleblower recently told the Daily Mail that President Joe Biden not only knew of his son’s business dealings but that he played an active role in them.

A Rasmussen poll conducted in March found that half of Americans believe that the suppression of the Hunter Biden laptop story influenced the outcome of the 2020 elections.

In addition to DiResta’s connections to alleged misinformation in an Alabama Senate race and to suppression of the Hunter Biden laptop story, she suggested to The New York Times last year that there should be a “centralized task force” that would organize a “single, strategic response” to alleged information, referencing the lab leak theory for COVID-19 and questions related to the 2020 presidential election.

According to DiResta, this “task force” would be supported by partnerships with technology companies to “push for structural changes that could help those companies tackle their own extremism and misinformation problems.”

In April, a “task force” like the one proposed by DiResta was announced by the Department of Homeland Security (DHS) called the Disinformation Governance Board (DGB). The Board was quickly panned by conservatives and labeled the “Ministry of Truth” in reference to George Orwell’s 1984. Nina Jankowicz, who was appointed head of the board, had previously told the New York Daily News that Hunter Biden’s laptop should be viewed as a “Trump campaign product,” and lamented the possibility of “free speech absolutism.”

The DHS discontinued the Disinformation Governance Board in August, months after it was announced. A recent report published by The Intercept, however, details how documents obtained from a lawsuit by the Attorneys General of Missouri and Louisiana revealed that several government agencies, including the DHS, the Federal Bureau of Investigation (FBI), and other Biden officials worked with Big Tech companies to censor “misinformation.” The report also suggests that the DHS seeks to continue to target “misleading information” without a foreseeable pause.

In addition to DiResta, Nikole Hannah-Jones, a journalist and Harvard professor who established the 1619 Project that attempts to retell American history through a Marxist lens, also appeared as a panelist.

Historians have criticized the 1619 Project for attempting to rewrite history. In 2019, a group of historians wrote an op-ed for The New York Times in which they denounced the claims made by Hannah-Jones. “We are dismayed at some of the factual errors in the project and the closed process behind it,” the group wrote. “These errors, which concern major events, cannot be described as interpretation or ‘framing.’ They are matters of verifiable fact, which are the foundation of both honest scholarship and honest journalism.”

Both the Obama Foundation and DiResta did not immediately respond to LifeSite’s request for comment.