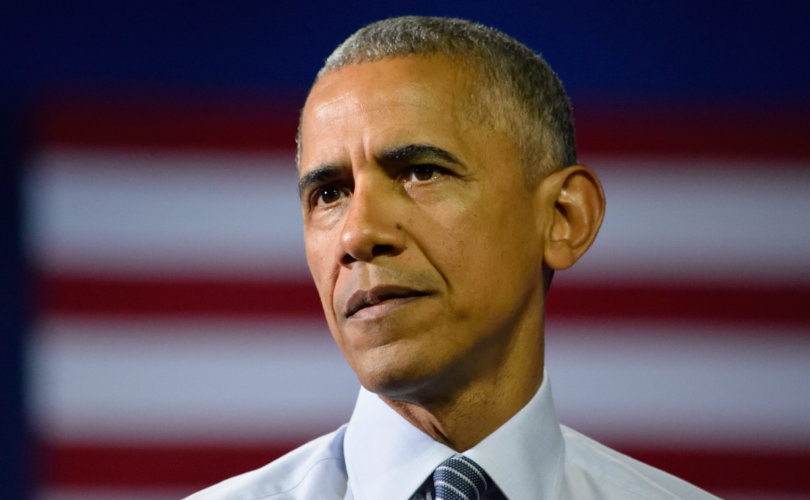 November 25, 2020 (LifeSiteNews) – Former U.S. President Barack Obama said this morning in a New York City radio interview that “a lot of … evangelical Hispanics” voted for Trump because they agree with his views against abortion, despite the fact, according to Obama, that Trump says “racist things.”

The interview happened during The Breakfast Club morning show on 105.1 FM as a promotion for a new book by Obama, with relevant clips tweeted by The Recount.

Mr. Obama stated, “People were surprised about a lot of Hispanic folks who voted for Trump. But there’s a lot of evangelical Hispanics who, the fact that Trump says racist things about Mexicans, or puts detainees, undocumented workers in cages, they think that’s less important than the fact that he supports their views on gay marriage or abortion.”

Obama on @breakfastclubam: “… There’s a lot of evangelical Hispanics who, the fact that Trump says racist things about Mexicans, or puts undocumented workers in cages, they think that’s less important than the fact that he supports their views on gay marriage or abortion.” pic.twitter.com/8OpocwYrLV

Further, the report continued, “The ‘cages’ Obama refers to were in fact built during his administration, as chain-link enclosures meant to temporarily house illegal immigrants at border facilities.”

Other commentators emphasized that the motivations of Latinos may have been altogether different. Ben Domenech, co-founder of The Federalist, tweeted, “Oh I dunno maybe it had more to do with DEFUND THE POLICE and SOCIALISM IS FINE than gay marriage… There is literally no proof – on a data basis, polling basis, anecdotal basis – that Obama's ‘gay marriage drove Hispanics to vote Trump’ claim is true. It's a bigoted claim, and it's a lie.”

According to Barack Obama, people who oppose him are:
– Hispanic bigots
– White bigots
– Religious bigots
I'm sensing a pattern.

In the same interview, Mr. Obama utilized more language from the school of identity politics deriding a “sense that white males are victims” in “Republican politics,” and the “sincere belief” that “they’re the ones that are under attack.”

David Horowitz recently pointed out the ironies of such rhetoric, observing, “Identity politics is a pure form of racism, yet Trump is the only Republican I’m aware of who has had the political spine to call a Democrat a racist.”

He went on to explain that “race is the principal weapon wielded by Democrats, (and) this is most evident in their claim that there is ‘systemic racism’ in America, which needs to be rooted out even if it means destroying the very foundations of law and order.” The problem, he noted, is the charge of “systematic racism … is never accompanied by evidence.”

“Systemic racism has been outlawed in America since the Civil Rights Act of 1964. If there were actual instances of systemic racism in 2020, there would be lawsuits – plenty of them,” he affirmed. “You never hear of massive lawsuits over systemic racism because ‘systemic racism’ is a myth. The myth lives because it is an indispensable weapon wielded by Democrats to advance their anti-democratic agendas and quests for power.”