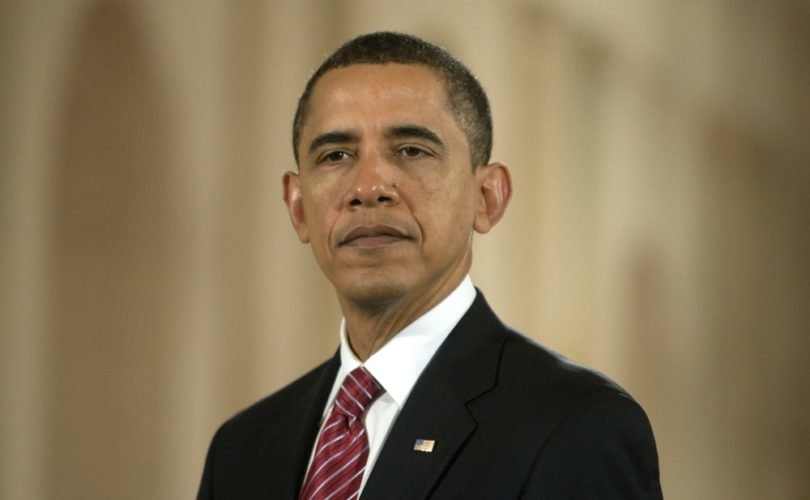 David Axelrod reveals in his new book that, after proclaiming his support for marriage at one campaign event, Obama dismissed his rhetoric as nothing more than a bout of 'bullsh---ing.'

WASHINGTON, D.C., February 10, 2015 (LifeSiteNews.com) – A former senior adviser to President Obama has confirmed what his most strident critics have said all along: Barack Obama lied to the American people about opposing gay “marriage” to boost his chances of winning the 2008 presidential elections.

David Axelrod, a veteran of Chicago left-wing politics who advised Obama during the campaign, makes the admission in a new book Believer: My Forty Years in Politics, which hits book shelves today.

Obama first indicated his support for redefining marriage while running for state office in Illinois in 1996, filling out a questionnaire that said, “I favor legalizing same-sex marriages, and would fight efforts to prohibit such marriages.”

Candidate Obama wanted to publicly broadcast his views during his campaigns for national office but was afraid the position – then radically unpopular – would end his chances of becoming president. Axelrod writes that campaign manager Jim Messina warned Obama that backing same-sex “marriage” could cost him the electoral votes of North Carolina.

Instead, both he and Hillary Clinton said they held to the traditional definition of marriage, although they supported “civil unions” for homosexuals.

During a 2008 debate, Obama told Saddleback Church megapastor Rick Warren, “I believe that marriage is the union between a man and a woman. Now, for me as a Christian, it is also a sacred union. God’s in the mix.”

But Axelrod reveals in his new book that, after proclaiming his support for marriage at one campaign event, Obama dismissed his rhetoric as nothing more than a bout of “bullsh—ing.”

Axelrod said that the candidate agreed to conceal his views, but “Obama never felt comfortable with his compromise and, no doubt, compromised position. He routinely stumbled over the question when it came up in debates or interviews.”

When others asked about Obama's 1996 campaign statement, his supporters played it off as a campaign snafu. White House Communications Director Dan Pfeiffer said in 2011, “That questionnaire was actually filled out by someone else.”

As a candidate, he walked a thin line, stating his support for traditional marriage – but opposing any efforts that would legally codify that belief and backing government policies that would grant greater acceptance (and benefits) to homosexuals. In 2008, he dismissed opposition to homosexuality as based on “an obscure passage in Romans.”

Obama did, in fact, carry North Carolina in 2008 on his way to the White House, where he chose to bide his time until he could come out in favor of gay “marriage.”

He mentioned gay “marriage” in the first-ever U.S. report to the UN Human Rights Council in 2010, placing redefining marriage in the context of a right that could be defended by an international governing body. “Debate continues over equal rights to marriage for LGBT Americans at the federal and state levels,” the report stated.

Months later, Obama hinted at a bloggers conference in October 2010 that “attitudes evolve” on gay “marriage,” “including mine…I think it’s pretty clear where the trend lines are going.”

Axelrod exposes the fact that Obama was actually dying to place the full rhetorical weight of the bully pulpit behind same-sex “marriage.”

“Yet if Obama’s views were 'evolving' publicly, they were fully evolved behind closed doors,” Axelrod writes. “The president was champing at the bit to announce his support for the right of gay and lesbian couples to wed — and having watched him struggle with this issue for years, I was ready, too.”

When the moment came, it was Vice President Joe Biden who led the way. Biden endorsed gay “marriage” on May 6, 2012, saying he was “absolutely comfortable” with the concept. Obama publicly endorsed same-sex “marriage” with his own statement three days later.

“I’ve just concluded that for me personally, it is important for me to go ahead and affirm that I think same-sex couples should be able to get married,” Obama told ABC News reporter Robin Roberts in an interview that aired on May 9, 2012. “When we think about our faith, the thing at root that we think about is, not only Christ sacrificing Himself on our behalf, but it’s also the Golden Rule.”

He also invoked his daughters, Malia and Sasha.

Obama had just opposed North Carolina's successful referendum on a constitutional amendment defining marriage as the union of one man and one woman. Mitt Romney would narrowly win North Carolina in 2012.

Presented with the admission that Obama had concealed social and political views that are well to the Left of the American electorate to gain high office, critics denounced his lack of courage and candor.

Blogger Patterico wrote that Obama should have been accustomed to lying, because, “Practice makes perfect. And he’s had a lot of practice.”

Yet liberal writer Jonathan Chait praised Obama in New York Magazine, writing that “Obama had the decency to lie badly.” Yet he admitted Obama's actions were “morally questionable.”

A few people had long questioned Obama's “opposition” to redefining marriage all along.

Peter LaBarbera of Americans for Truth about Homosexuality asked in 2013, “With Obama’s track record of misrepresentations and manipulations, we must ask again: did candidate Obama in 2008 feign Christian loyalty to natural marriage to help himself get elected? Was it all an act?”

Does it bother anyone that Obama is clearly lying about his position on gay marriage?

“His position was always an obvious joke,” blogger AllahPundit wrote at HotAir.com, “although not so obvious that lots of low-information voters who don’t follow this stuff closely couldn’t have been duped by it.”

Obama has shown his true colors ever since, filing an amicus brief with the Supreme Court supporting same-sex “marriage” in 2013. Attorney General Eric Holder announced last month the Obama administration would file a second friend of the court brief in the upcoming case, which could see the High Court impose redefined marriage upon the entire nation.

Perhaps Obama's greatest contribution to the cause is the fact that two justices he appointed – Sonia Sotomayor and Elena Kagan – will cast a vote on the ruling, unless they recuse themselves as court watchdogs have demanded.