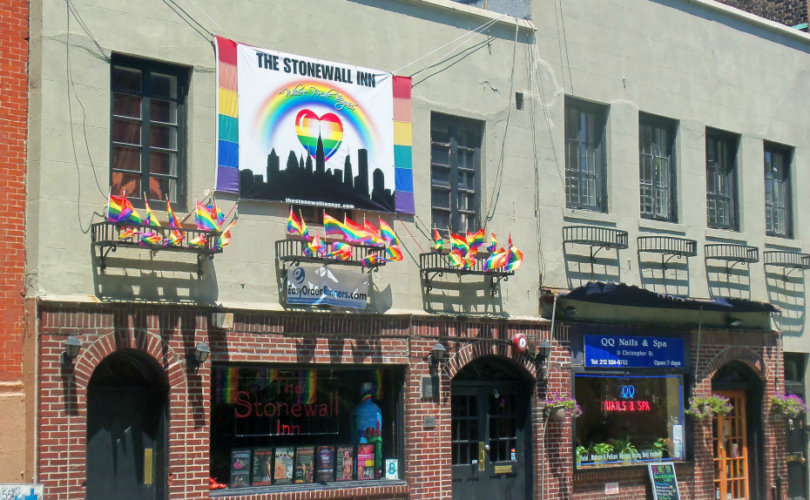 WASHINGTON, D.C., May 6, 2016 (LifeSiteNews) – President Obama has taken the first step to name the scene of an famous riot by homosexuals against police, the Stonewall Inn, a national monument.

The president plans to kick off June, LGBT Pride Month, by preserving the area around the Greenwich Village, New York, tavern as a site for future generations to revere as the birthplace of the modern LGBT political movement.

Brian Sullivan, a former bartender at the establishment, greeted the news with joy, saying, “This is the Mecca; it's where it all started.”

The Stonewall Riots broke out after New York police raided the establishment, which was being run at the time by the mafia without a liquor license, on June 28, 1969, on a morals charge.

The raid did not go as planned. Seymour Pine, a deputy inspector with the Morals Division at the time, said that his six officers were surrounded by thousands of homosexuals and supporters who threw bottles at them, slashed police car tires, and left officers running for their safety.

“We had maybe six people and by this time there were several thousand outside,” remembered Pine, who led the bust. “The other side was coming like it was a real war. And that's what it was, it was a war…It was as bad as any situation that I had met in during the army.”

The protesters – joined by Black Panthers and antiwar protesters – broke the windows, then burst through the door.

“Our goal was to hurt those police,” said rioter John O'Brien at the time. “I wanted to kill those cops for the anger I had in me…It gives back a little of the terror they gave in my life.”

Howard Smith, a reporter with The Village Voice who was holed up inside the bar with the police and several homosexuals, saw lighter fluid sprayed inside the establishment.

“I actually thought, as all of them did, that we were going to be killed,” he said.

By morning, much of the establishment had been burned or wrecked.

Sporadic hostilities continued for days, culminating in the formation of the Gay Liberation Front.

The event has been hailed as the “birth” of the modern gay rights movement.

A spokesman for the Interior Department said Barack Obama “has made clear that he’s committed to ensuring our national parks, monuments and public lands help Americans better understand the places and stories that make this nation great.”

The move came in response to a campaign conducted by New York Rep. Jerrold Nadler and Sen. Kirsten Gillibrand, both Democrats, to receive federal recognition of the scene's historical importance to the homosexual activist cause.

“The LGBT civil rights movement launched at Stonewall is woven into American history, and it is time our National Park system reflected that reality,” Rep. Nadler said. “We must have federal recognition of the LGBT movement’s history and origins and ensure that this piece of LGBT history is preserved for future generations.”

The bar last made news earlier this year when a transgender man was raped in its restroom.

The president has hailed Stonewall in the past, despite its dubious history.

“When I was a kid, [presidents talked about] Lexington and Concord and Bunker Hill,” Buchanan said.

“What was he talking about? Stonewall,” he said. “Does that belong in a presidential inaugural?”

About that rape at the Stonewall Inn… isn’t the LGBT bathroom agenda supposed to make us all safer?