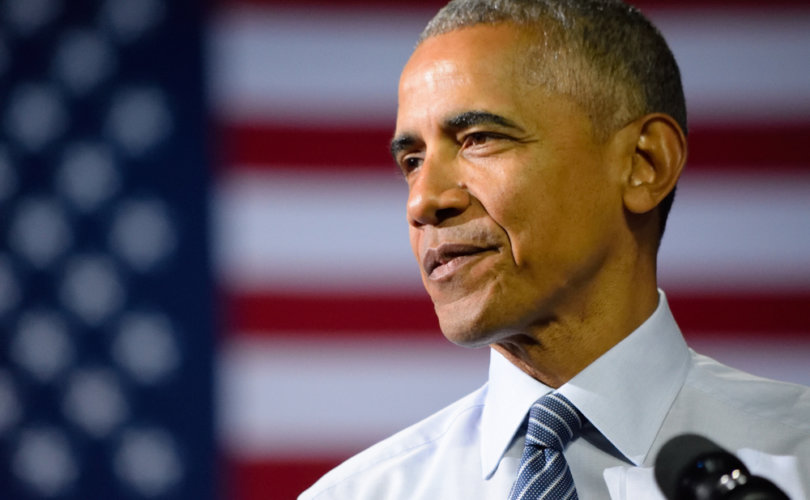 (LifeSiteNews) – Shortly before leaving office, President Obama and his administration took some actions regarding pandemics and “global health security” which some may find interesting.

First, President Obama’s Council of Advisors on Science and Technology (PCAST), led by John Holdren, wrote and published a letter to the President with multiple recommendations for defending America against biological attacks and naturally occurring outbreaks of infectious diseases, including epidemics/pandemics.

The letter was released on November 15, 2016, which was a week after the Democrats lost the Office of the President to Donald Trump; this is important and should be kept in mind throughout this article.

The letter discusses the previous U.S. federal government attempts at addressing the United States’ biodefense strategy, and then concludes that “it is necessary to rethink the overall organizational structure for anticipating, preparing for, and responding to biological threats” and naturally occurring epidemics. It is implied that new “mechanisms to evaluate progress” are needed. (Page 6)

This seems to be significant: after losing to Donald Trump, President Obama’s science and technology advisors were suggesting President Obama set up a new approach to plan and prepare to defend against biological threats, which include naturally occurring viruses and epidemics.

should create a new interagency entity charged with planning, coordination, and oversight of national biodefense activities across the Intelligence Community and the Departments of Defense (DoD), Homeland Security (DHS), Health and Human Services (HHS), and Agriculture. (Page 14)

developing, within six months, a national biodefense strategy—including short-, medium-, and long-term components—to anticipate, prepare for, and respond to all issues that arise as biotechnology continues to advance… (Page 14)

The new entity should provide

The recommendation does not explain what “other activities” the Intelligence Community might use to mitigate threats.

This new surveillance capacity should include the ability to

The science and technology advisors then recommend that President Obama’s White House make goals to achieve the following within ten years:

For infectious organisms for which there exist effective approaches to creating vaccines, the United States should have the ability to accomplish, within a six-month period, the complete development, manufacture, clinical testing, and licensure of a vaccine. For pandemic influenza, the goal should be 3 to 4 months to vaccine deployment …. For infectious organisms that might be reasonably anticipated to lead to sudden epidemic spread that could threaten the U.S. population or U.S. interests overseas, the United States should have pre-tested vaccine candidates through safety and immunogenicity studies. (Page 15)

Included in the recommendation for vaccines are approaches that “rely on antigens expressed by RNA and nucleic acid analogs to stimulate protective immunity against specific pathogen epitopes.” (Page 16)

The advisors also recommend that the “Secretary of Health and Human Services and the Secretary of Defense should report annually to the White House about progress and impediments” to reaching such goals. (Page 15)

But how does the Department of Defense and Department of Health and Human Services know the progress of “the United States…ability to accomplish, within a six-month period, the complete development, [mass] manufacture, clinical testing, and licensure of a vaccine”?

President Obama followed through with at least some of the above recommendations from his Council of Advisors on Science and Technology. On December 23, 2016, (again, after Democrats lost to Donald Trump) President Obama signed the National Defense Authorization Act for Fiscal Year 2017.

But there was another interesting pandemic action made by President Obama. On November 4, 2016, less than a week before Democrats lost to Donald Trump, President Obama signed the Executive Order “Advancing the Global Health Security Agenda to Achieve a World Safe and Secure from Infectious Disease Threats.”

As explained in the title, the executive order advances the Global Health Security Agenda, which includes

a group of 70 countries, international organizations and non-government organizations, and private sector companies that have come together to achieve the vision of a world safe and secure from global health threats posed by infectious diseases.

China, Italy, Japan, Pakistan, Turkey, the World Bank, the World Health Organization, and others are members. Included in the “Global Health Security Agenda” is increased surveillance and high vaccination rates.

But in the November 4, 2016 Executive Order “Advancing the Global Health Security Agenda” (GHSA), President Obama then commands the Department of Defense, Department of Justice, State Department, the CDC, National Security Council, and others to make “the GHSA and its implementation a high priority within their respective agencies.”

Even the FBI is commanded to advance the globalist health security agenda; President Obama orders that “the Attorney General, generally acting through the Director of the Federal Bureau of Investigation (FBI)” shall link “public health and law enforcement, and coordinate with INTERPOL [The International Criminal Police Organization] on the GHSA and its successful implementation.” INTERPOL includes countries like China, Russia, Iran, and others.

Those are significant orders from President Obama: the FBI linking law enforcement with public health but also coordinating internationally to implement the globalist “health security” agenda.

Additionally, President Obama’s executive order requires FBI programs to “further the GHSA, as well as provide technical expertise to measure and evaluate progress in countries the United States has made a commitment to assist” and “work, in conjunction with interagency partners and the in-country GHSA team, with other donors and nongovernmental implementers in partner countries in which FBI programs are active in order to coordinate and leverage commitments to advance the GHSA with partners.”

Only four days before Democrats lost to Donald Trump – who campaigned on and was elected for his anti-globalist promises – President Obama commanded the FBI to link law enforcement with public health and coordinate with INTERPOL to implement the global health security agenda?

The increased activity on pandemics and “global health security” by the Obama Administration shortly before and after losing the power of the Office of the President to Donald Trump may be significant.