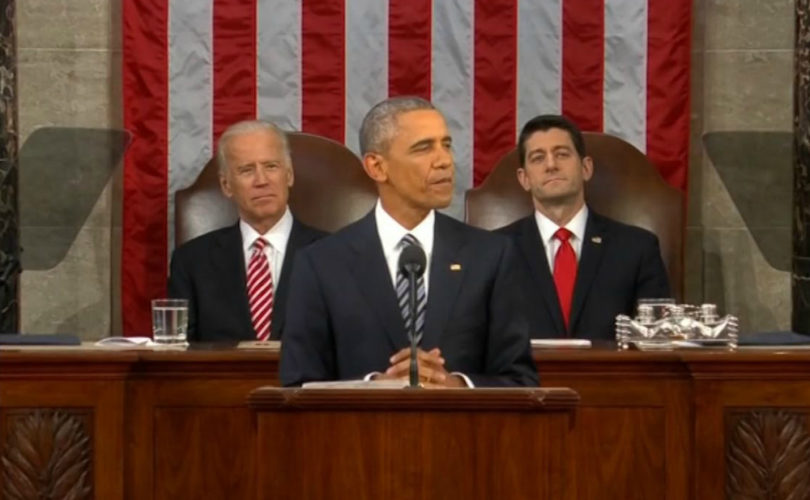 WASHINGTON, D.C., January 13, 2016 (LifeSiteNews) – President Obama hailed gay “marriage” as one of his proudest accomplishments and looked forward to the day when Americans would shed traditional sexual morality to embrace homosexuals in his final State of the Union address last night.

The president told a combined chamber of Congress, Cabinet members, and most of the Supreme Court that upholding our “unique strengths as a nation” and heeding the “spirit of progress” made our national celebration of sexual minorities possible.

“That's how we secured the freedom in every state to marry the person you love,” Obama said early in his rather short national address.

“The Republican leadership ought to set aside an empty chair in the front of the chamber to represent the more than 50 million Americans whose votes in support of traditional marriage were stolen by…an anti-constitutional, illegitimate ruling of the U.S. Supreme Court,” said Brian Brown, president of the National Organization for Marriage. “It's a national insult that President Obama would celebrate such an affront to democracy.”

To underscore his commitment to the issue, First Lady Michelle Obama invited James Obergefell, the plaintiff in the Supreme Court case, as one of her special guests. Ohio Congressman Jim Jordan gave a spare ticket to the Family Research Council, which in turn invited county clerk Kim Davis, who refused to issue marriage licenses to same-sex couples on religious liberty grounds. Obergefell said if he confronted Davis, he would tell her that her stance “isn't right, it isn't fair, and isn't what America is about,” but there is no indication that the two met. For her part, Davis said she hoped her presence helped “encourage” Christians who “want to make a difference” in our nation.

The president, who gave his final State of the Union address, returned to the subject of homosexuality later in the hour-long speech.

“I have such incredible confidence in our future, because I see your quiet, sturdy citizenship all the time,” he said.

He said he found hope in “the son who finds the courage to come out as who he is, and the father whose love for that son overrides everything he's been taught” about homosexual behavior.

Once again, Obama made no reference to abortion in the national address, although he praised ObamaCare, saying that premium hikes caused by “health insurance inflation” were now increasing at a lower rate than in previous years.

He once again advanced federal intervention in education policy, calling the No Child Left Behind bill “an important start” to offering universal, publicly funded preschool.

“In the coming years, we should build on that progress, by providing Pre-K for all,” he said.

Obama has advocated federally funded daycare since his first presidential campaign in 2008, mentioning it in previous State of the Union addresses, and even including a reference in the nation's first-ever report to the UN Human Rights Council.

Policy experts warn that the new entitlement would not be helpful, and that most Americans do not want that kind of government tinkering with traditional family roles.

“Families seem to prefer caring for their children at home in their early years,” said Lindsey Burke, a scholar at the Heritage Foundation.

Multiple studies show that any educational benefit the child received by attending Head Start disappears by the spring of first grade, but well-documented “negative effects of preschool on children’s behavior” – such as increased aggression and arrested emotional development – “remain.”

He warned that, without heeding his advice, America may descend into a virtual civil war fueled by xenophobic religious fanatics bitterly clinging to their guns, religion, and antipathy to those who are different.

Unnamed forces may soon “roll back the equal rights and voting rights that generations of Americans have fought, even died, to secure,” he warned darkly. “As frustration grows, there will be voices urging us to fall back into tribes, to scapegoat fellow citizens who don't look like us, or pray like us, or vote like we do, or share the same background.”

During past epochs, he said, “there have been those who told us to fear the future; who claimed we could slam the brakes on change, promising to restore past glory if we just got some group or idea that was threatening America under control. And each time, we overcame those fears.”

In one of the more remarked upon passages of his speech, Obama lamented the fractious nature of American political discourse – something his rivals said he has done more than anyone to create.

“It's one of the few regrets of my presidency ,” he said, “ that the rancor and suspicion between the parties has gotten worse instead of better.”

Actions that lead to this outcome include questioning the other side's motives, he said.

However, the Obama administration has released multiple reports accusing Christians and members of the pro-life movement of being incipient domestic terrorists and held a joint training session on terrorism led by Planned Parenthood. The rhetorical gambit has been picked up by Hillary Clinton.

Obama promised to “keep trying to be better so long as I hold this office.”

Sen. Marco Rubio found the remark surreal. “This president has been the single most divisive political figure this country has had over the last decade,” he said after the annual event.

Overall, conservatives dismissed the speech. Kim Davis proved to be underwhelmed by the oration. When asked for her reaction, she replied curtly, “It was a speech.”