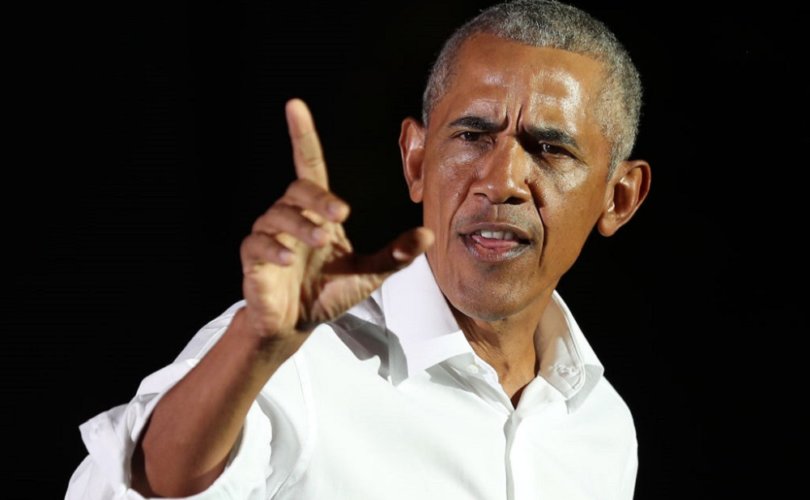 (LifeSiteNews) – Former President Barack Obama is under fire for defending school boards and brushing off “fake outrage” amid a sexual assault scandal riling a Virginia county and making national headlines.

“We don’t have time to be wasted on these phony trumped-up culture wars, this fake outrage, the right-wing media’s pedals to juice their ratings,” Obama said Saturday while campaigning for Democrat gubernatorial candidate and former Virginia Gov. Terry McAuliffe.

“That’s not what this election is about. That’s not what you need, Virginia,” he continued. “Instead of forcing our communities to cut back at a time when we’re just starting to recover, we should be doing more to support people who are educating our kids, and keeping our neighborhoods safe,” Obama said.

The former president’s remarks came days before a judge found a 15-year-old “gender-fluid” boy in Virginia’s Loudoun County guilty of forcibly sodomizing a female classmate in May. The student, who was wearing a skirt during the attack in a girls bathroom, was later charged with abusing another girl at a different high school, where he was transferred earlier this year despite his pending charges.

The Loudoun County school board and public school system have faced blistering criticism for their handling of the assaults, especially after an email released this month revealed that school officials knew about the bathroom rape before publicly claiming that there was no record of sexual assaults in the county’s schools.

Commentators and parents quickly ripped into Obama for his Saturday comments.

“You have the former President of the United States, who never hesitated to highlight abuses and other civil rights violations when he was President and it was politically expedient. Now that it has the potential to backfire against the leftists trying to move out society dramatically to the left, it’s inconvenient for him to recognize it and to speak honest truth to power,” Ian Prior, a senior official in the Department of Justice during the Trump administration, told the Daily Mail.

Virginia public schools have pushed critical race theory in the classroom, suppressed concerned parents at school board meetings, and covered up for a gender-fluid sexual predator, who allegedly raped two innocent girls. https://t.co/huMrFirb7v

Two girls were sexually assaulted on school property, and school admin officials publicly lied about their knowledge of it to parents. https://t.co/WmBE8py4Pe

“That is the most tone-deaf statement I have ever heard,” one Loudoun County father reacted in an interview with Fox News.

“First and foremost, everything that has come up with the cover-up in Loudoun County has to do with a sexual assault on girls. To say that this is trumped up as a political thing is laughable,” the father, Brandon Michon, said. “People are upset because Loudoun County covered up that they knew about sexual assaults and the question is, what else do we not know about?”

“It doesn’t feel like it’s culture war or fake outrage.”

“Parents are craving leadership that will protect them from the wokism,” she told Fox News. [Republican nominee for governor Glenn Youngkin] is clearly the only candidate willing to fight for parents. Obama peddling this nonsense shows he is in denial that anything is wrong.”

A national survey released today by Rasmussen Reports found that 76 percent of adults “are concerned that public schools may be promoting controversial beliefs and attitudes,” with 58 percent describing themselves as “very concerned.” Two-thirds of Democrats and 90 percent of Republicans reported having concerns about political or controversial material in school lessons.

Education and parental rights have emerged as flashpoints in Virginia’s upcoming elections. In a recent Fox News poll, more than half of Virginia parents and 50 percent of likely voters said that should have control over content being taught children.

In a debate last month, Gov. McAuliffe came out squarely against parents’ rights over their kids’ education, declaring “I don’t think parents should be telling schools what they should teach.” “I’m not going to let parents come into schools and actually take books out and make their own decision,” he said.

“Terry McAuliffe showed us his heart when he said that ‘parents don’t matter.’ He immediately disqualified himself from office,” Youngkin said in statement. “I believe that parents matter, and I’ll never put government bureaucrats or politicians between parents and their kids. As governor, I’ll empower parents and restore excellence and common sense in education.”

The two candidates have been virtually tied in recent weeks, but a Fox News poll published Thursday night found that Youngkin has pulled ahead by eight points since mid-October.