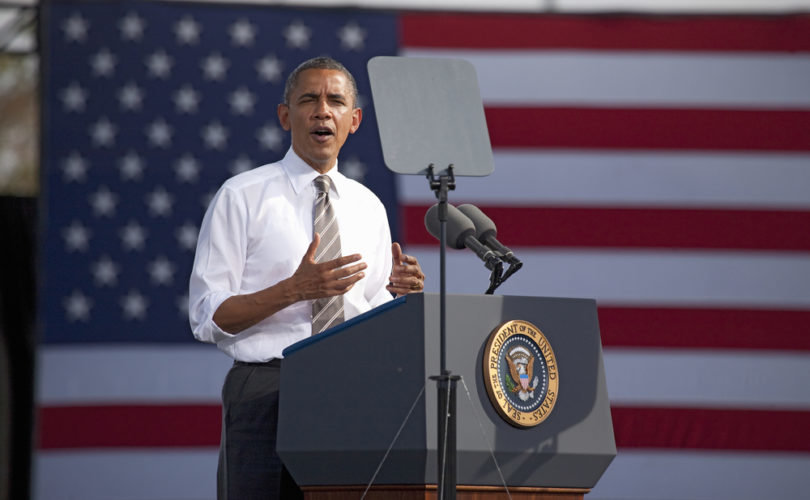 WASHINGTON, D.C., June 17, 2014 (LifeSiteNews.com) – President Obama will sign an executive order adding homosexuality and transgender status as a protected class for the employees of federal contractors, the White House has announced.

“Following on his pledge for this to be a year of action to expand opportunity for all Americans, the president has directed his staff to prepare for his signature an executive order that prohibits federal contractors from discriminating on the basis of sexual orientation or gender identity,” a White House official told The Hill on Monday.

The executive order would, in essence, codify the never-passed Employment Non-Discrimination Act (ENDA) into law for firms that work for the federal government.

The Republican response to the order has been muted so far. But social conservatives have said the executive order shows a president who intends to use extra-constitutional powers to enforce a radical social agenda.

Peter Sprigg, senior fellow for policy studies at the Family Research Council, said, “Congress has not passed the Employment Non-Discrimination Act (ENDA) or similar provisions, despite activists' pressure to do so, because of the detrimental impact on employers' and employees' constitutional freedoms of religion, speech, and association.”

“President Obama insists on punishing those who do not move along with him in his views on homosexuality and marriage.”

Concerned Women for America's legal counsel, Mario Diaz, said the move reflects “what little regard President Obama has for the American people and our form of government. Democracy, once again, gets in the way of his personal preferences, and so he disregards it with little concern for the long-term implications of his actions. He does not help the 'LGBT' movement with his dictator-like actions, but only continues to divide and demonize people of faith who continue to believe as he claims he did not too long ago.”

ENDA has passed the Democrat-controlled Senate, but House Speaker John Boehner has refused to bring it up for a vote, saying it is “unnecessary and would provide a basis for frivolous lawsuits.”

The Heritage Foundation warned that ENDA “tramples fundamental civil liberties,” “creates special privileges” for homosexuals and transgender people, and treats “moral convictions as if they were bigotry.” The U.S. Conference of Catholic bishops has said, “ENDA could be used to punish as discrimination what many religions – including the Catholic religion – teach, particularly moral teaching about same-sex sexual conduct.”

“It is the most basic of American beliefs that every citizen should be free to practice their religion free from government intervention,” Diaz said. “But President Obama insists on punishing those who do not move along with him in his views on homosexuality and marriage to the point that he is willing to use the force of his executive power to violate the Constitution he swore to uphold.”

The administration has taken executive actions to promote homosexuality and transgender issues in the past. Then-Labor Secretary Hilda Solis issued guidelines banning federal funds to contractors who allow any “unwelcome conduct” against people who engage in minority sexual practices. The U.S. Department of Housing and Urban Development barred Section 8 recipients from refusing to rent a home or room to anyone based on sexual behavior, in part by redefining the meaning of the word “family” in federal law.

The ENDA executive order has been long-sought by LGBT pressure groups, alongside the repeal of the Defense of Marriage Act and lifting the military ban on open homosexuality. Barack Obama's closest adviser, Valerie Jarrett, told LGBT activists she had asked the Justice and Labor Departments to review such an executive order two years ago.

The left feels this will energize Democratic voters in what is projected as a Republican sweep in the midterm elections. “This is a signal to the ‘rising electorate’ needed to turn out in midterms (LGBT, African American, Latinos and young people) that there’s a reason to come out and vote,” Winnie Stachelberg, an executive vice president for the Center for American Progress told Politico.

The Washington Post reports that several major Democratic donors withheld campaign funds from the party this election cycle over Obama's refusal. Monday's announcement was timed to coincide with Obama's appearance at an LGBT Democratic fundraiser.

“The timing of this announcement is clearly designed to curry favor with activist organizations,” Sprigg said. “While the president prepares to address a New York gathering of gay rights supporters, the American people will be left to sort out the costs to religious and constitutional liberties resulting from this executive order.”

Diaz said the executive order is a measure “of the president's radicalism” and “a testament of his poor leadership that he is unable and unwilling to engage Congress and the American people in a meaningful, civilized and respectful conversation and debate on these issues that are so important to us all. It is sad that he instead feels the need to game the system to impose his will on the nation by executive action.”