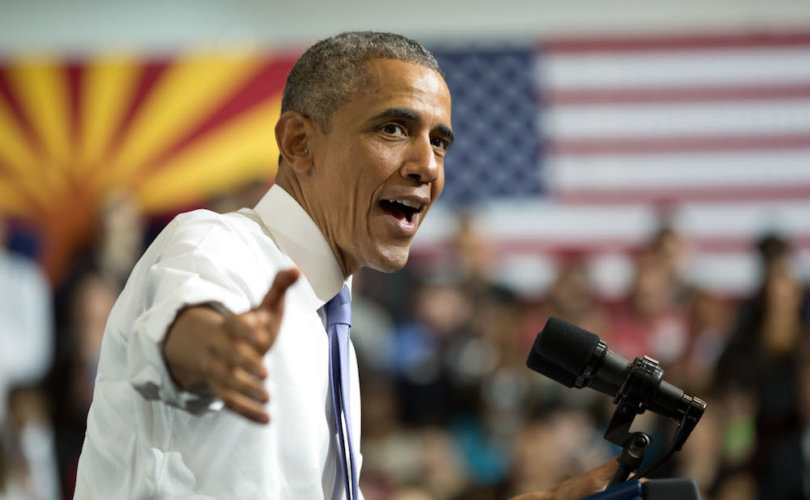 “My administration is striving to better understand the needs of LGBT adults and to provide affordable, welcoming, and supportive housing to aging LGBT Americans,” the president writes in his Presidential Proclamation for LGBT Pride Month, a declaration that has become an annual tradition. “It is also why we oppose subjecting minors to the harmful practice of conversion therapy, and why we are continuing to promote equality and foster safe and supportive learning environments for all students.”

The latter is an apparent reference to his controversial federal guidance that all public schools and universities must allow members of one sex to use the restrooms, showers, and overnight accommodations (including dorm rooms) of the opposite biological sex or lose federal funding.

However, the president took the opportunity of his last pride month proclamation to reiterate his support for a federal ban on reparative therapy for minors, a position he shares with Hillary Clinton.

Their real agenda may have nothing to do with concern over the safety of LGBT youth, an expert tells LifeSiteNews.

Opponents of reparative therapy really want to silence any institution that refuses to endorse homosexuality, David Pruden, executive director of the Alliance for Therapeutic Choice and Scientific Integrity, told LifeSiteNews.

In a real sense, he said, there is no “conversion therapy,” a term he strongly rejects.

He says members of the alliance use an array of methods including “behavioral therapy, cognitive therapy, contextual therapy” to assist young people who do not wish to experience same-sex attraction.

None of their tactics are controversial, he said.

“All of the therapeutic techniques used by our members and friends in the counseling professions are mainstream, conventional counseling practices used by all other therapists and taught in every university program across the nation,” Pruden told LifeSiteNews. “We don't do anything special. We just apply normal counseling process to a particular challenge. And the vast majority of the clients our member therapists and friends see are not dealing with sexual issues of any kind.”

However, liberal states are facing increased pressure to prevent young people from seeking help for unwanted homosexual urges – sometimes brought on by sexual molestation – and even to classify the practice as a form of torture.

“What the radical political activists object to is the willingness of our members and friends to support the right of some clients to choose not to identify as gay, participate in gay sexual behavior, and/or try to manage or diminish gay sexual attractions and have a counselor support their goals,” Pruden told LifeSiteNews.

“As every other voice is eliminated and every option for help disappears ,the obvious next step…is the intimidation and elimination of religious institutions that will not conform.”

The LGBT movement's effort to stifle reparative therapy “represents the desire of particular cultural/political force to eliminate from the public conversation all those who disagree with their particular political perspective and worldview,” he said.

Freedom to change your life: Why the government shouldn’t ban ‘reparative therapy’