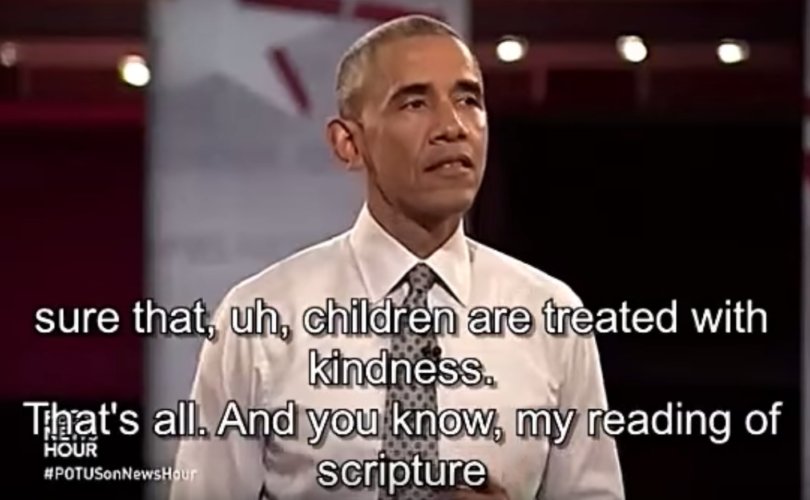 “Mr. President, I am a strong believer in equal rights for everyone,” said the questioner, Arvis Dawson, during a meeting in Elkhart, Indiana, which aired on PBS.

“I was wondering, though, with all the pressing issues you have before you right now, why is the issue of which bathroom a person uses such an issue?” he asked.

“Somehow people think I made it an issue,” Obama responded. “I didn’t make it an issue.” Instead, he said, “schools are asking us, the Department of Education, for guidance, 'How should we deal with this?'”

That inspired him to issue his controversial federal guidance that all public schools and universities must allow anyone who says he is transgender to use the restrooms, showers, and overnight accommodations of the opposite biological sex or risk losing federal funding.

Obama said schools had a responsibility “to accommodate these [transgender] kids so that they are not in a vulnerable situation.”

PBS moderator Gwen Ifill asked Dawson, an African-American, why he opposed the policy.

“Mainly, it’s my religious belief,” Dawson said, adding that “from the church background that I come from, I believe in equal rights for all.”

The president replied, “I have profound respect for everybody’s religious beliefs on this. But if you’re at a public school, the question is, how do we just make sure that [transgender] children are treated with kindness.”

“And you know, my reading of Scripture tells me that that Golden Rule is pretty high up there in terms of my Christian belief,” he said.

He offered, “That doesn’t mean somebody else has to interpret it the same way” and that the underlying issue “is going to be settled by the courts, ultimately.”

It was not the first time the president had said the Bible supported homosexual and transgender activism.

When he announced his support for same-sex “marriage” in May 2012, Obama told ABC that he and his wife, Michelle, “are both practicing Christians and obviously this position may be considered to put us at odds with the views of others, but, you know, when we think about our faith, the thing at root that we think about is, not only Christ sacrificing Himself on our behalf, but it’s also the Golden Rule.”

In 2008, he implied the Bible supports homosexual unions. “If people find that controversial, then I would just refer them to the Sermon on the Mount, which I think is, in my mind, for my faith, more central than an obscure passage in Romans,” he said.

The Benham Brothers attributed the president's transgender guidance to another spiritual entity altogether.

Rev. Franklin Graham has strongly opposed the federal guidelines, which do not have the effect of law, saying they undermine Christian morality and common sense.

“I’m proud of the 12 states who are suing the Obama administration over the transgender policy that they are trying to force down the throats of the American people!” he wrote on his Facebook page this afternoon. “We need more politicians and leaders like these who will take a stand against the dangerous riptide of political correctness in this country.”

“We can all do something,” Rev. Graham wrote. “Contact your representatives and school superintendents and let them know that you expect them to protect your family’s privacy and stand against policies like this that allow sexual predators inside women’s and girls’ locker rooms and bathrooms!”

GWEN IFILL: And your question?

ARVIS DAWSON: First of all, I want to thank you, President, for your service to our country.

ARVIS DAWSON: And, uh, despite the polls, there’s a lot of love for you here in Elkhart.

PRESIDENT BARACK OBAMA: — one thing is after seven and a half years, you don’t worry about the polls no more.

ARVIS DAWSON: My question to you, Mr. President, I am a strong believer in equal rights for everyone…

ARVIS DAWSON: A very strong believer in that. I was wondering, though, with all the pressing issues that you have before you right now…

ARVIS DAWSON: — why is the issue of which bathroom a person uses such an issue?

PRESIDENT BARACK OBAMA: Well, I — you know what, it’s — it’s a great question. Uh, somehow people think I made it an issue. I didn’t make it an issue. There — there are a lot of things that are more pressing, you’re absolutely right.

What happened and what continues to happen is you have transgender kids in schools. And they get bullied. And they get ostracized. And it’s tough for them.

And, you know, we’re of the generation where that stuff was all out of sight and out of mind and so people — people suffered silently. But now they’re out in the open. And the question then is, schools are asking us, the Department of Education, for guidance, how should we deal with this?

And my answer is that we should deal with this issue the same way we’d want it dealt with if it was our child. And that is to try to create an environment of some dignity and kindness for these kids.

And that’s sort of the bottom line. I have to just say what’s in my heart but I also have to look at, you know, what’s the law?

And my best interpretation of what our laws and our obligations are is that we should try to accommodate these kids so that they are not in a vulnerable situation.

Now, I understand that people, you know, for religious beliefs or just general discomfort might disagree. And I’m not the one who’s making a big issue of it.

But if it — if the school districts around the country ask me what do you think we should do? Then what we’re going to do is tell them let’s find a way to accommodate them in a way that makes sure that these kids are not, you know, excluded and ostracized.

GWEN IFILL: Let me ask Mr. Dawson whether he’s satisfied with the answer to that question and what — what is it about this that bothers you?

ARVIS DAWSON: Mainly, it’s my religious belief. Yes, I’m satisfied with the answer to the question.

ARVIS DAWSON: — coming from the church background that I come from, I believe in equal rights for all.

PRESIDENT BARACK OBAMA: Well, but, right. And — and the problem is just for a lot of these kids, they might not even feel comfortable going to the bathroom, which is a tough situation if you’re a kid. And — and look, I — I have profound respect for everybody’s religious beliefs on this. But if you’re at a public school, the question is, how do we just make sure that, uh, children are treated with kindness. That’s all. And you know, my reading of scripture tells me that that golden rule is pretty high up there in terms of my Christian belief.

That doesn’t mean somebody else has to interpret it the same way. It does mean as president of the United States, those are the values that I think are important. Now, this is going to be settled by the courts, ultimately. There have been lawsuits everywhere. I just wanted to emphasize to you, though, this — it’s not like I woke up one day and I said, man, you know what we really need to do is let’s start working on high school bathrooms.

PRESIDENT BARACK OBAMA: You know, that — I was thinking about ISIL. And I was…

PRESIDENT BARACK OBAMA: — thinking about, you know, the economy and I’m thinking about jobs. But one of the things that, as president, you learn is that you don’t choose the issues all the time. The issues come to you. And then you have to make your best judgment about what you think is right. And…

PRESIDENT BARACK OBAMA: — and I’ve expressed what I think is the best judgment that is consistent with our traditions and our laws.