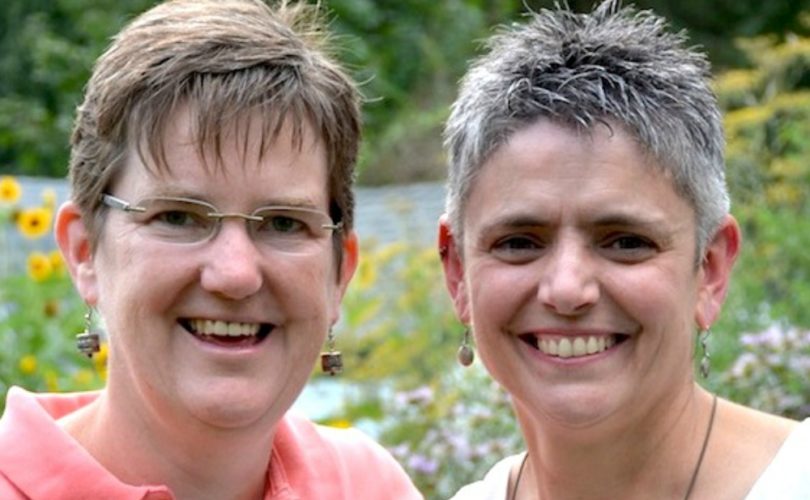 WASHINGTON, D.C., September 22, 2015 (LifeSiteNews) — The lesbian teacher fired from a Philadelphia-area Catholic school after complaints over her homosexual “marriage” has been invited to the White House to attend the welcoming ceremony for Pope Francis.

Homosexual activist organization Human Rights Campaign (HRC) verified Monday that it had gotten tickets from the White House for Margie Winters and her homosexual partner Andrea Vettori for the event. The Wednesday ceremony is not open to the public.

The women, who were already planning to attend papal events in Washington D.C. and the World Meeting of Families, were reportedly “giddy” about the news of their invitation.

“Obviously we won't be talking to the pope, but we will be in the vicinity,” Winters said of the White House event. “But symbolically, it's a great step forward.”

A report surfaced late last week that the Vatican had taken offense to a White House list of controversial invitees.

An unnamed Vatican official reportedly expressed concern that the photo opportunities with members of the group that publicly violate Church teaching, a pro-abortion activist nun, an openly homosexual Episcopal bishop, and gay activist Catholics, would be used by the Obama administration to indicate Pope Francis approved of their actions.

Winters had been informed in June she would not have her contract as Director of Religious Education renewed at Waldron Mercy Academy in Merion Station, eight years after entering into a homosexual “marriage” with Vettori.

The school administration apparently knew about the women’s relationship, as Winters said she was told by the former principal at the time of her “marriage” she could disclose it to the faculty but should keep it from students and parents.

After recent complaints to the school and the Archdiocese of Philadelphia, she refused a request to resign and was dismissed, spawning backlash from some parents, students, and alumni.

Those opposed to the decision blamed the archdiocese for Winters’ removal, however the archdiocese said Waldron Mercy is a private school not under its purview and has maintained Winters’ firing was a personnel decision made at the school level.

Also in July, Vettori wrote a letter to Pope Francis, lamenting the women’s situation and asking for a meeting.

HRC posted a video of Winters and Vettori on its website, complete with their “marriage” story, the firing, and Vettori reading her letter to the pope. While reading the letter, she choked up while asking Pope Francis, “to intervene on our behalf and countless other faithful Catholics so that we may not be condemned to live a life exiled from a church we so love and want to serve.”

“We're asking the bishop to stop firing people for LGBT issues,” Winters said in the video.

Various pro-homosexual groups and individuals have appealed to the pope in advance of his U.S. visit for their cause, and some are planning to perform homosexual advocacy while attending the World Meeting of Families in Philadelphia, despite having been barred from using Catholic sites for promotion of activities that violate Church teaching.

Parents and guardians of students in Archdiocese of Philadelphia schools were recently asked to sign a pledge to uphold Catholic identity to counter negative influences in the culture. The Memorandum of Understanding that parents were requested to affirm was developed prior to Winters’ dismissal from Waldron Mercy.

The women still hope for a meeting with Pope Francis to advance the cause of homosexuality within the Church.

“We continue to say it's the spirit at work,” said Winters. “It's the people who have been supporting us, moving this issue forward and in front of people.”