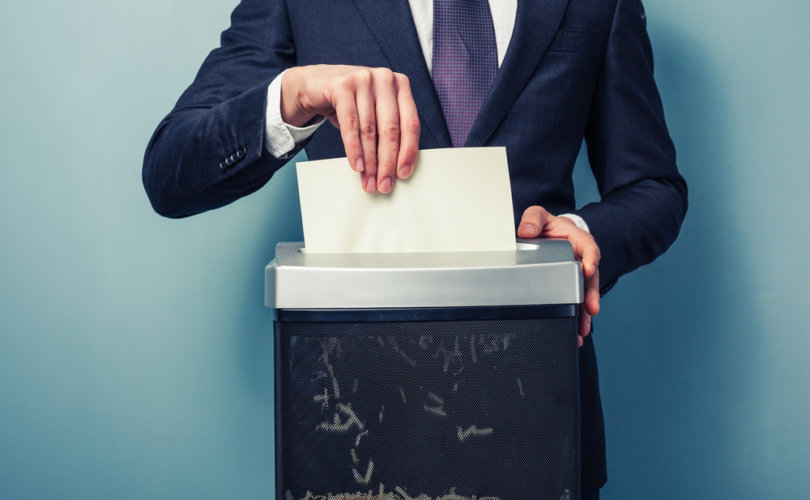 PORT NECHES, TX, May 13, 2016 (LifeSiteNews) – While the nation is mulling its reaction to President Obama's new federal guidance requiring all public schools to allow members of one biological sex to use the restrooms of the opposite sex, one school superintendent in Texas knows exactly what to do with it: Put it in the shredder.

Dr. Rodney Cavness, superintendent in Port Neches, Texas, said Thursday night that the forthcoming letter, released Friday morning, would have a special place in his office.

“That letter is going straight to the paper shredder,” he said. “I have five daughters myself and I have 2,500 girls in my protection. Their moms and dads expect me to protect them, and that is what I am going to do.”

The federal guidance and an accompanying 25-page document of proposed policies require that biological males who tell school officials they are transgender must be allowed to use the girls' showers and locker rooms, or the schools could face a federal civil rights lawsuit and lose all education funding.

The guidance also states that members of one biological sex must be allowed to stay overnight in the same rooms or dormitories as members of the opposite sex, if the former identify as transgender.

Dr. Cavness, superintendent of Port Neches-Groves Schools, said he is sensitive to the needs of students with gender dysphoria, but he has to draw a line over this. “Now I don't want them bullied… but there are accommodations that can be made short of this,” he said.

“I got news for President Barack Obama. He ain't my president, and he can't tell me what to do,” he added. “He is destroying the very fiber of this country. He is not a leader. He is a failure.”