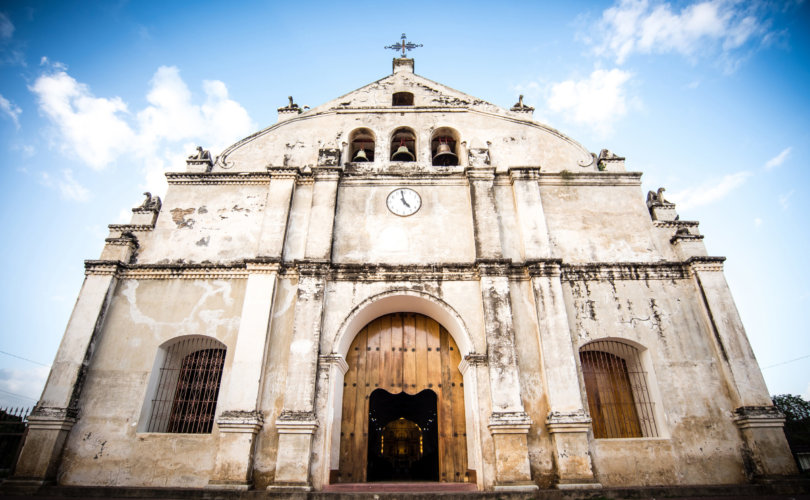 (LifeSiteNews) – Growing numbers of Nicaraguan Catholics are condemning Pope Francis for failing to speak out in the face of mounting state persecution of the Church in Nicaragua.

“Pope Francis’ silence on what’s going on in Nicaragua is scandalous. Daniel Ortega’s dictatorship is taking the churches by force, they have shut down all their channels and radios, even one priest is in jail, and the rest are afraid of being kidnapped,” Agustin Antonetti, director of a non-governmental organization called Latin America Watch, said Thursday, according to Breitbart.

Antonetti’s condemnation followed the forceful shutdown of seven Catholic radio stations by President Ortega’s National Police force, ordered on August 1. Bishop Rolando José Álvarez Lagos of the Diocese of Matagalpa was later put under house arrest, along with five priests and six laypeople, and accused in a statement issued by National Police of inciting “violent groups” to “execute acts of hatred (…) with the purpose of destabilizing the State of Nicaragua  … ”

The past week’s events are the latest chapter in the ongoing persecution of the Catholic Church by Ortega’s regime, which began in 2018 when Catholic churches sheltered government protesters, who were being targeted by the Nicaraguan government and subject to incarceration, harassment, and death.

Latin American news outlet Infobae recently reported that Nicaraguan researcher Marta Molina has documented during the past four years more than 250 attacks on the Catholic Church by what Nicaraguans term the “OrMu” regime, a reference to the joint leadership of Daniel Ortega and Rosario Murillo, Ortega’s wife and vice president.

According to United Nations High Commissioner for Human Rights Michelle Bachelet, May saw an uptick in harassment of Catholic priests. Bachelet reported that since that time reports emerged of Nicaraguan police following and intimidating priests, and the government had also “ordered the removal of the Catholic Channel from the cable television grid.”

As far back as 2018, Argentine journalist Andrés Oppenheimer slammed Pope Francis for his silence on the “OrMu” regime persecution, declaring, according to Infobae, “Pope Francis has remained inexplicably silent lately about the brutal repression of the Nicaraguan regime against Catholic priests and the death of at least 322 people in the anti-government protests of the last four months. His behavior can be described, in a word: shameful!”

Silence from Pope Francis, and the Vatican, continued uninterrupted. Last November, writer Sergio Ramírez Mercado, likewise decried the Holy See’s silence on the matter in an interview with journalist Gumersindo Lafuente of eldiario.es:

“Pope Francis has kept a silence that is heard all over the world about the situation in Nicaragua,” Ramírez said. “It would be advisable for all the Catholic faithful in Nicaragua, who are half of the population, to hear what the Pope has to say about this barbarism that has been happening since 2018 and that continues to happen now with the detention of so many people, with the unstoppable growth of political prisoners,” Ramírez said.

Political analyst Eliseo Núñez believes that Pope Francis “looks at Daniel Ortega as the guerrilla of 1979 and continues to believe that he is part of a social change movement and not the dictator he really is,” since, he claims, the pope is “imbued with that anachronism of the Latin American left that looked at things in black and white, for or against the gringos.”

Núñez also attributes the Vatican’s silence in part to the influence of the former Vatican nuncio to Nicaragua, the Nigerian priest Fortunatus Nwachukwu, who is now permanent observer of the Holy See at the United Nations Office.

“Nwachukwu is the worst nuncio we have ever had. He became part of Rosario Murillo’s protégés and was someone who received many favors from the regime,” alleged Núñez, adding that he continues to advise Pope Francis as Vatican nuncio to the U.N.

Not all believe the lack of public condemnation from the Holy See is itself reprehensible. Nicaraguan journalist Israel González, who lives in exile in Spain, believes that Pope Francis’ silence is calculated to minimize harm to the Church in Nicaragua. He told Infobae, “In view of the brutal hardening of the regime, it should be thought that a more direct positioning of the Pope would generate much greater repression and violence against the local Church, its bishops, priests, nuns and temples,”

An “expert on ecclesiastical issues” who desires to remain anonymous for “protection” acknowledged to Infobae that there may be potential strategy behind the Vatican’s silence on the matter. However, his final analysis echoed comments by Antonetti: While Pope Francis “may be making some cautious management,” he said, considering everything that has occurred in Nicaragua “after more than four years, the Pope’s silence is scandalous.”