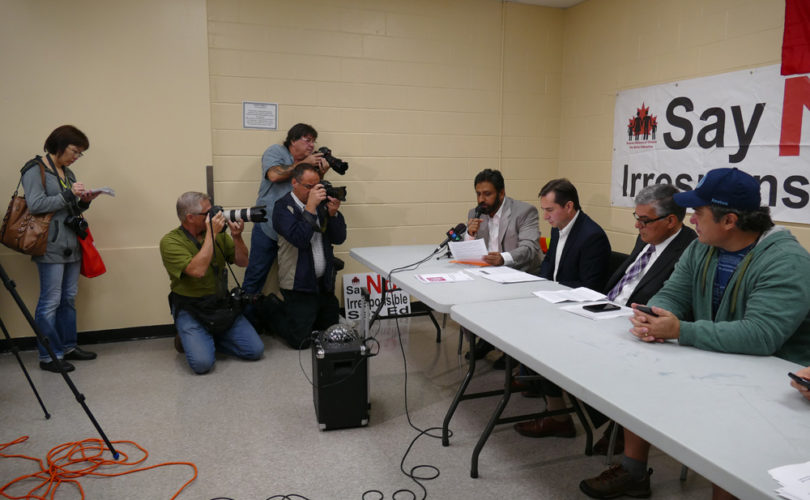 TORONTO, September 29, 2015 (LifeSiteNews) – The grassroots coalition mobilizing for a province-wide student strike on October 1 says that parental opposition to the Liberals’ controversial sex-ed curriculum is growing, despite the government’s “organized bullying” in rolling out the curriculum this September.

See 11-minute LSN video of important highlights of press conference. See links to two more important, brief videos of explosive revelations from Jack Fonseca at the bottom of this article.

One of five CFA representatives at a Monday press conference, Campaign Life Coalition’s Jack Fonseca said that the coalition, which represents more than 25 parent rights’ groups, social media and cultural associations and an estimated 200,000 Ontarians, has “a creative range of options” and “disruptive actions” still to deploy after the October 1 student strike.

These included possibly suing the government and school boards, further protests, and outreach to parents as yet unaware of the Liberals’ radical sexual agenda, he said.

“The [Premier Kathleen] Wynne government has given us no other chance but to protest,” noted Lou Iacobelli, a retired teacher and CFA spokesman. “We who pay the taxes” should ask the Liberals to “refund all protesting parents $10,000” – the cost per child per year for public education –“and let parents choose the best education for their children.”

Iacobelli said the Liberal government did an “about face” on its assurance that parents could opt their children out of the curriculum adding that both Wynne and Education Minister Liz Sandals “have lied to us. They should resign.”

Khalid Mahmood, president of the Thorncliffe Parents Association and organizer of the 30-day student strike, echoed this, saying Liberals’ opt-out offer was “disingenuous.”

Both the Peel and Toronto public school boards have said parents cannot opt their children out of sections of the curriculum on sexual orientation and gender identity, claiming these are under Ontario Human Rights Code protection.

Mahmood, a father of five, said his association of parents is not against any group, but “we reject anything that teaches moral corruption” to their children. Parents are “raising their voices” against the “organized bullying” of the Liberal government, he noted.

And the Liberals have deliberately kept parents “in the dark,” says CFA spokesperson Christina Liu, who pointed out to LifeSiteNews after the press conference that “we have been misled, we do not have all the information about the curriculum.”

Indeed, the Liberals “refused to disclose the contents of the curriculum” before its February release, she said. “That makes parents more concerned about what the government is trying to hide behind it.”

Liu’s group, Parents Alliance of Ontario (PAO), has been asking without success for an open, public debate on the “scientific merit and medical information” in the sex-ed curriculum, Liu said, so that parents can see what is being taught, and can verify that its contents are – as the Liberals claim – evidence based. “It’s to let the parents have the confidence in the public system.”

“If the government is really committed to the protection of our children, to the best interests of our children, I think they would be running after us to have a public debate,” Liu added. “Why don’t we sit down and talk about it?”

She told LifeSiteNews that parents from at least three schools in North York public schools are planning to take part in the strike, and that PAO has been publicizing the October 1 action. PAO is committed to fight the Liberals sex-ed agenda right up to the next elections. “We will not forget as parents, we will keep on until 2018.”

Sam Sotiropolous, director of My Child My Choice and former trustee with the Toronto District School Board, stated at the Monday press conference that a “convicted child predator had a hand in the sex-ed curriculum.”

He was referring to Ben Levin, who as deputy minister of education in 2009 oversaw the 2010 sex-ed curriculum, which then Premier Dalton McGuinty shelved because of parental backlash, but which is virtually identical to the Wynne/Sandals sex-ed curriculum.

Levin was arrested in 2013 and charged with seven child-pornography related charges, and pled guilty to three. He is serving a three-year sentence that began May 29 (he will be eligible for day parole November 29).

Fonseca echoed this, noted that he agrees with right-wing pundit Ezra Levant’s description of the sex-ed curriculum as “a pedophile manifesto.”

The curriculum introduces gender theory to children in Grade 3, he said, a theory which holds that gender is “fluid like water” and “you can change from boy to girl.” By Grade 8, students are taught that there are six genders as opposed to the two biological sexes.

Fonseca stated that the curriculum advises Grade 7 students to “get an understanding of what brings you pleasure,” adding that could lead to a highly troubling classroom situation in which a “45-year-old” male teacher is “helping a 12-year-old girl to figure out what gives her sexual pleasure.”

“We are calling for a mass withdrawal of students in every community” on October 1, he stated. “Parents will send a strong message that the Liberals cannot ignore: Let kids be kids!”

For more information on the October 1 province-wide student strike and other sex-ed protests, go here.

Note: these videos contain explicit, shocking information, but only information that is referred to in the curriculum or in the teachers' notes and information on the youth-directed website of the main consultant and Community partner for the curriculum, Planned Parenthood.