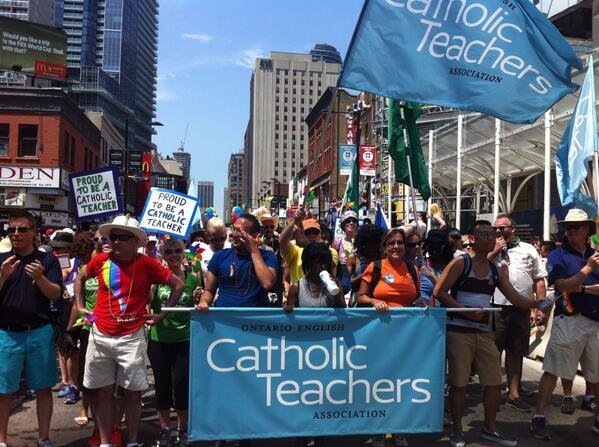 TORONTO, March 18, 2015 (LifeSiteNews.com) — The Ontario English Catholic Teachers’ Association (OECTA) passed a resolution at its mid-March AGM to form an LGBTQ working group “to be composed of at least 50 percent self-identifying LGBTQ members (where safely possible).”

The resolution was sponsored by the Human Rights Committee of the Toronto Secondary Unit (TSU), and according to “AGM proposed resolutions for TSU resolutions meeting,” available on TSU’s website, the rationale behind it was that “LGBTQ Catholic teachers are among the only Ontarians who can be fired, without just cause, because of their sexual orientation.”

These teachers “live and work with persistent and oppressive fear of exposure which forces them into the closet, erodes their confidence and self-esteem, and increases their isolation.” The document stated: “The formation of a working group dedicated to investigating and eradicating this last bastion of legalized discrimination is both timely and necessary.”

“LGBTQ Catholic teachers remain a target for discrimination, reprisal and lack of work security because of institutional homo/bi/transphobia,” Welbes-Godin wrote in the February/March 2015 issue of TS*YOU, the TSU newsletter.

“With our own provincial premier being open and out, many of our own LGBTQ members continue to work in fear and conflict,” contended Welbes Godin, who noted that OECTA president James Ryan and TSU president Dave Szollosy attended the inaugural teachers’ GSA and promised “further work to protect some of OECTA’s most vulnerable members.”

OECTA’s special project coordinator for equity and inclusivity, Welbes Godin stated that Catholic LGBTQ teachers are limited “under a cloud of systematic oppression” and kept from being “healthy, contributing and faithful role models to their students, especially to those who self-identify as LGBTQ.”

Evidently, AGM delegates voted against this one, but OECTA did not return calls from LifeSiteNews to confirm this by deadline. Nor was LifeSiteNews able to obtain by deadline a copy of the OECTA resolution on the LGBTQ working group as passed.

According to the article by Welbes Godin, who is also past chair of the Catholic Association of Religious and Family Life Educators of Ontario (CARFLEO), these two TSU resolutions “reflect a growing confidence in and commitment by our Catholic union to work for us and fully represent all members.”

Hawkins, who replaces James Ryan on July 1, 2015 for a two-year term, is a former elementary and secondary school teacher with the Dufferin-Peel Catholic Board, according to OECTA’s website. She is “passionate” about women’s issues and human rights, and will represent the union at the March 9-20 meeting of the UN Commission on the Status of Women in New York.