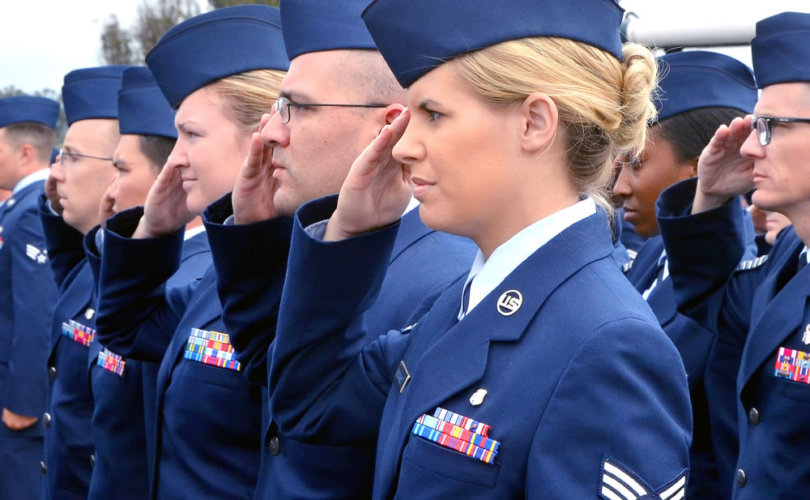 (Thomas More Society) — For the first time, a court stopped the U.S. Air Force from enforcing its military COVID-19 vaccine mandate against a service member.

The United States District Court for the Middle District of Georgia entered a preliminary injunction on Tuesday prohibiting the Department of Defense and Air Force from enforcing the vaccine mandate against an officer who has religious objections to the vaccine and also from forcing her to retire. The order was handed down in the officer’s lawsuit against the Secretary of Defense, the Secretary of the Air Force, and the Surgeon General of the Air Force.

Thomas More Society attorneys are representing the Air Force officer, who has served her country for over 25 years. The order is consistent with those entered by other courts that have preliminarily enjoined enforcement of military vaccine mandates against other service members in two branches of the military, the Navy and the Marines.

In its order, the court noted that “constitutional protections remain commandments, not suggestions,” even for the military. The court left no doubt that the mandate imposed a substantial burden on the officer’s sincerely held religious belief. The order stated, “Very few scenarios paint a bleaker picture than giving up your livelihood in order to follow your religious beliefs.” And while the court acknowledged that the Air Force claimed it had instituted a process for reviewing and assessing religious accommodations, it found that process to be “both illusory and insincere.” Requests for religious accommodation were “rubber-stamped with disapproval and denial,” as the Air Force had denied more than 99 percent of all such requests.

The court concluded, “All Americans, especially the Court, want our country to maintain a military force that is powerful enough to thoroughly destroy any enemy who dares to challenge it. However, we also want a military force strong enough to respect and protect its service members’ constitutional and statutory religious rights. This ruling ensures our armed services continue to accomplish both.”

“We are, of course, pleased with the ruling,” Thomas More Society special counsel Adam Hochschild said. “We hope that this is beginning of the end of the Air Force’s illegal enforcement of these mandates against service members.”

The officer has been discriminated against because of her Christian beliefs. Like thousands of other service members, she objects to the COVID-19 vaccines because of their connection to abortion. Moreover, the officer has natural immunity. She has already had COVID-19 and twice tested positive for the antibodies in the year following her recovery. The officer has been willing to work remotely and test for COVID-19 periodically, and is compliant with masking, social distancing, and other practices, and, most important, has deeply held religious convictions against the vaccine. She sincerely believes that receiving one of the currently available COVID-19 vaccines would violate her conscience and would be contrary to her faith.

“This is a great victory for religious freedom,” stated Stephen Crampton, senior counsel with the Thomas More Society. “The Air Force had granted over 1,500 medical exemptions by the time we filed this lawsuit, but not a single religious exemption – not one. After we filed, it suddenly decided to start granting or claiming to grant religious exemptions, albeit only a handful. It is disgraceful how the military in general has disrespected fundamental First Amendment rights. We are grateful that the court has restored the Free Exercise rights of this courageous officer and are hopeful that her victory will help to protect the rights of conscientious objectors everywhere.”

Though religious leaders are divided over the morality of receiving COVID-19 vaccinations, there is no question that embryonic cell strains originally extracted from aborted fetuses were used in either the production or in the efficacy testing of each of the available vaccines. The military has not disputed the sincerity of the officer’s religious beliefs or that the vaccine mandate put a substantial burden on them.

Nevertheless, in December, the Air Force issued a final denial of the officer’s request for religious accommodation. The officer filed suit in January. The lawsuit challenges both the military and federal-civilian-employee mandates that apply to the officer, stating that the Air Force’s refusal to grant this officer an exemption to the vaccination mandate violates the law including the Religious Freedom Restoration Act and the First Amendment of the Constitution. The civilian mandate is subject to a nationwide injunction issued by another court.