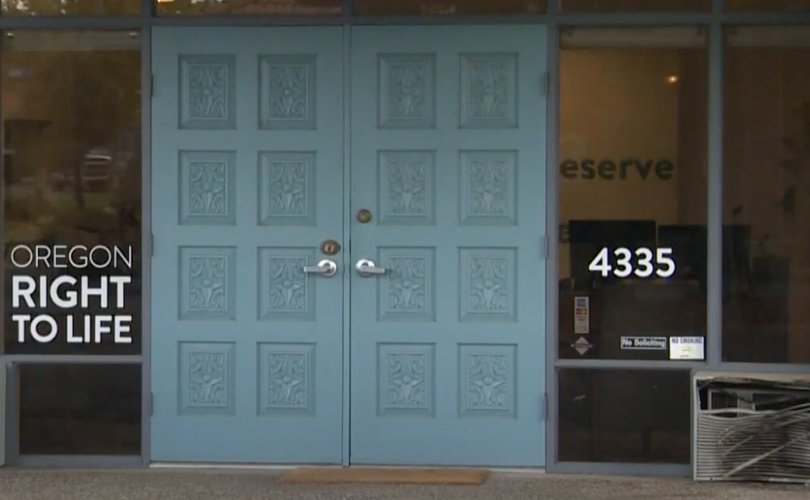 SALEM, Oregon (LifeSiteNews) – The offices of Oregon Right to Life were attacked late Sunday night with “incendiary devices,” resulting in a small fire.

On May 8, local law enforcement officials arrived on the scene at 10:40 p.m. According to police, someone threw Molotov cocktails after failing to break into a window. No one was in the building at the time. An investigation is currently underway to determine who perpetrated the attack. Police do not know how many people were involved.

Lois Anderson, the executive director of Oregon Right to Life, released a statement the next day saying, “Understandably, our team is shaken up by this attack. We are committed to taking proper precautions to protect the safety of our staff as we move forward.”

“We are thankful for the quick action of our first responders committed to maintaining a safe environment to operate in this community,” Anderson concluded.

The attack occurred a week after a leaked draft opinion published by Politico indicated that a majority vote of the Supreme Court would overturn Roe vs. Wade, the decision that brought abortion on demand to the United States.

When asked if the May 8 attack on the Oregon Right to Life offices was inspired by the Supreme Court draft decision, Anderson said, “We don’t know for sure because there was no graffiti or messaging left.”

“It’s hard to think that it wasn’t connected,” she added.

“I think we have to make some assumptions that it was motivated … It’s hard for me to get my head around somebody wanting to do that.”

A growing number of attacks perpetrated by pro-abortion activists against pro-life organizations and Catholic churches have followed the unauthorized release of the draft opinion.

An attack was perpetrated against Wisconsin Family Action’s headquarters earlier on Sunday when arsonists set fire to the building and wrote on the wall: “If abortions aren’t safe then you aren’t either.”

Attacks against pro-life crisis pregnancy centers (CPC’s) also have taken place in Portland since Politico published the draft opinion. According to pro-life activist Lila Rose, the attacks were carried out by Antifa. A pro-life social media account also said that Antifa published a list of CPC’s on twitter.

BREAKING: Antifa pro-abort men are attacking and putting out hits on pregnancy centers in Portland, OR. Because it drives pro-abort men to violent rage to think that women will have support to choose life. pic.twitter.com/Oomlr6EGUg

Sunday Mass was interrupted  at Our Lady of the Angels Cathedral on May 8 when a group of pro-abortion activists attempted to stage a protest during mass. The protesters were escorted out by parishioners and security.

Marxists try to disrupt Mass at Cathedral of our Lady of the Angels. Security, ushers and parishioners said they were not having it.#cathedral #Catholic pic.twitter.com/HlN8yHxPKL

The parish of the Sacred Heart of Mary in Boulder, Colorado, was vandalized last week, with someone smearing red paint on the hands and eyes of the statues of Jesus and Mary. Graffiti was also plastered on the walls, including the contradictory statement “Abortion saves lives.”