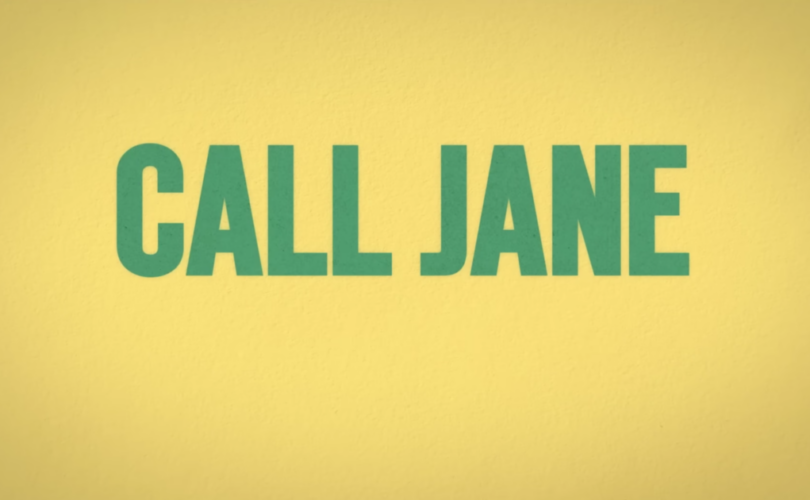 (LifeSiteNews) — The official news site of the Catholic Church in Switzerland has helped to promote a pro-abortion film.

On Thursday, kath.ch published in its “movie recommendations” section a positive review of Call Jane. The author, Sarah Stutte, endorses its message: the need for a so-called “right to abortion.”

“Call Jane shows how important the right to self-determined decisions is – not only for women!” Stutte wrote.

The pro-abortion movie tells the story of a U.S. housewife in the 1960s, who is carrying her second child when she is told her pregnancy is potentially life-threatening. After her request for an abortion is denied by the hospital, she calls a network of women, operating under the pseudonym “Jane,” who perform illegal abortions. After the mother aborts her child, she becomes a part of the network and starts assisting with the illegal killings.

The film is meant to depict abortion as something helpful and even life-saving for women.

According to the Hollywood Reporter the film’s producers partnered with Planned Parenthood, Abortion Care Network, and other abortion industrialists to screen the movie at abortion facilities.

— Article continues below Petition —
SIGN: Pope Francis must revoke nomination of pro-abortion atheist to Pontifical Academy for Life
Show Petition Text
9565 have signed the petition.
Let's get to 10000!
Thank you for signing this petition!
Add your signature:
Show Petition Text

The movie’s director, Phyllis Nagy, said that “[t]he screenings [of the film] will serve both as an opportunity to increase awareness around direct abortion care services and serve as a thank-you to clinics’ volunteers and staff as the demand for abortion care has increased in the months following the overturning of Roe v. Wade.”

Despite that, they published this article promoting a film that clearly contradicts Catholic teaching. The Catechism of the Catholic Church (CCC 2271) states the following regarding abortion:

Since the first century the Church has affirmed the moral evil of every procured abortion. This teaching has not changed and remains unchangeable. Direct abortion, that is to say, abortion willed either as an end or a means, is gravely contrary to the moral law:

You shall not kill the embryo by abortion and shall not cause the newborn to perish.

God, the Lord of life, has entrusted to men the noble mission of safeguarding life, and men must carry it out in a manner worthy of themselves.

Life must be protected with the utmost care from the moment of conception: abortion and infanticide are abominable crimes.

The Catechism furthermore explains that formal cooperation in abortion warrants the penalty of excommunication (CCC 2272):

Formal cooperation in an abortion constitutes a grave offense. The Church attaches the canonical penalty of excommunication to this crime against human life.

“A person who procures a completed abortion incurs excommunication latae sententiae,” “by the very commission of the offense,” and subject to the conditions provided by Canon Law.

The Church does not thereby intend to restrict the scope of mercy. Rather, she makes clear the gravity of the crime committed, the irreparable harm done to the innocent who is put to death, as well as to the parents and the whole of society.

LifeSiteNews reached out to the editor of kath.ch and the Swiss Bishops’ Conference to comment on the story or offer an explanation but has not received a reply.