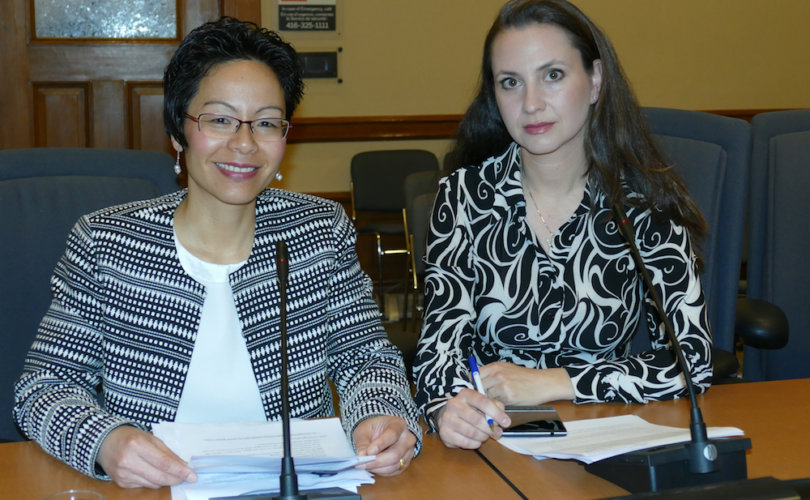 TORONTO, April 13, 2017 (LifeSiteNews) — As Parents As First Educators (PAFE) mounts a last-ditch lobby effort against pro-gender ideology Bill 89, one Liberal on the committee that could change the bill has made his bias clear.

Parental rights groups warn the bill gives the state more authority to seize children and will be used to enforce gender ideology in the home.

Bill 89 adds a child’s “gender identity” and “gender expression” as factors to be considered in determining what is in the “best interests of the child.”

And it deletes the religious faith the parents are raising the child in as a factor to be considered, replacing that with the child’s own “creed.”

The Liberals have agreed to amend Bill 89 to clarify that the child’s “creed” includes “religion.”

Tanya Granic Allen of PAFE, John Sikkema of ARPA, and Queenie Yu were among a number of pro-family groups and individuals requesting amendments to the bill at the April 6 justice committee’s public hearings on the legislation.

Yu, who asked that the terms “gender identity” and “gender expression” be deleted from Bill 89, founded the Stop the Radical Sex Ed Agenda Party, and ran as a party candidate in two provincial by-elections.

This did not sit well with Potts, Liberal MPP for Toronto’s Beaches-East York riding.

“The intent of our curriculum was to protect children: to give children more information, to protect them against abuse so that they can identify abuse,” he said.

The question took Yu by surprise.

“This bill is about the care of Ontario's children. I was there to comment and defend the rights of parents,” she told LifeSiteNews.

“If MPP Potts doesn't want to listen to me, to Ontario families, then perhaps he's in the wrong business.”

The “point of Committee is to allow the public and stakeholders to comment. It appears Kathleen Wynne’s MPPs believe they are above democracy,” added Yu.

Yu told Potts she had cited studies, not her opinion, on how children can be harmed by treated for gender dysphoria.

“It’s not my views; it’s the views of researchers, doctors,” she told Potts. “Actually, there’s a website called Sex Change Regret. There are people who are transgender who had a sex change and regretted it.”

But Potts cut Yu off to quiz her on the Ontario Human Rights Code and the Constitution of Canada, which protect people from discrimination: Did she believe people should not be discriminated against?

Yu agreed that “nobody should be discriminated against.”

Bill 89’s language is “lifted exactly from the Ontario Human Rights Code, in all the areas” and any change to the bill would “effectively change” the OHRC, Potts said.

“If we believe it is right that a child who identifies as a Christian from a cultural perspective is best placed into a Christian home, wouldn’t you agree that it would be wrong to place a child who is having gender identity issues in a home that didn’t respect their choices or the conflicts they were having in their life?” he asked.

“Don’t you think that people should be placed with a consideration of their status, whether it’s cultural heritage or their gender identity?”

“It’s interesting that you bring up Christian, because religious upbringing has been removed from the act,” countered Yu.

Potts “discriminated against my ideas but had the audacity to refer to the Ontario Human Rights Code. The irony is palpable,” she told LifeSiteNews.

Nor did the Liberal MPP “welcome dialogue from diverse voices including mine – a Chinese woman raised by immigrants who fled communism.”

During her presentation, Yu said in her work with teens she “came across one who was habitually slitting her wrists and another who was hardly eating anything because she perceived herself fat when in actual fact she was a skeleton.”

“Children can demand something, but a caring adult sometimes needs to say ‘no’ if what these children want is harmful,” she said.

“That seems obvious but the way that Bill 89 is currently written, it does not prevent a child asking for something harmful and for a caregiver to be obligated to provide it.”

Bill 89 retains the provision in the current law that a child who is suffering or “at risk of suffering” mental or emotional harm and whose parents do not provide “treatment or access to treatment” is need of protection under the law.

Moreover, Child and Youth Services Minister Michael Coteau was quoted in QP Briefing that “I would consider that a form of abuse, when a child identifies one way and a caregiver is saying, no, you need to do this differently.”

Treatment for transgender children includes puberty blockers between the ages of 10 and 12 that reduce estrogen and testosterone production, Yu said.

But these “hormones play a role in a child’s neurological development.” And since the human brain is developing until the age of the mid-20s, “these children will have some cognitive problems.”

A study by Lawrence S. Mayer and Paul R. McHugh found “little scientific evidence for the therapeutic value of interventions that delay puberty or modify the secondary sex characteristics of adolescents,” noted Yu.

Mayer and McHugh also found “that only a minority of children who experience cross-gender identification will continue to do so into adolescence or adulthood.”

Including “gender expression” and “gender identity” in the bill “will do harm to children and families,” the mother of four told the committee.

Since there are almost 300 amendments to the bill — about half of which are Liberal amendments — that could carry over until after the Easter break. MPPs can add amendments at any time during the clause-by-clause study.

PAFE is urging people contact committee members and their MPPs to support these amendments:

(4) Nothing in this Act affects the constitutional freedoms of conscience, religion and expression, and in particular the freedom of parents to hold and to teach their children their good faith, conscientious or religious beliefs with respect to matters of sexual identity and morality.

73.1 Nothing in this Part requires a parent or caregiver

(1) to affirm or to socially condition a child in a gender identity that is incongruent with the child’s birth sex; or

(2) to provide or facilitate access for a child or young person to medical services that are not medically necessary, such as puberty inhibitors and cross-hormone treatments as treatments for gender dysphoria; and failure to do so shall not be considered grounds for finding that a child is in need of protection within the meaning of subsection 73(2).

Granic Allen and Yu have interviewed free-speech advocate Dr. Jordan Peterson on Bill 89, a video of which can be found here.