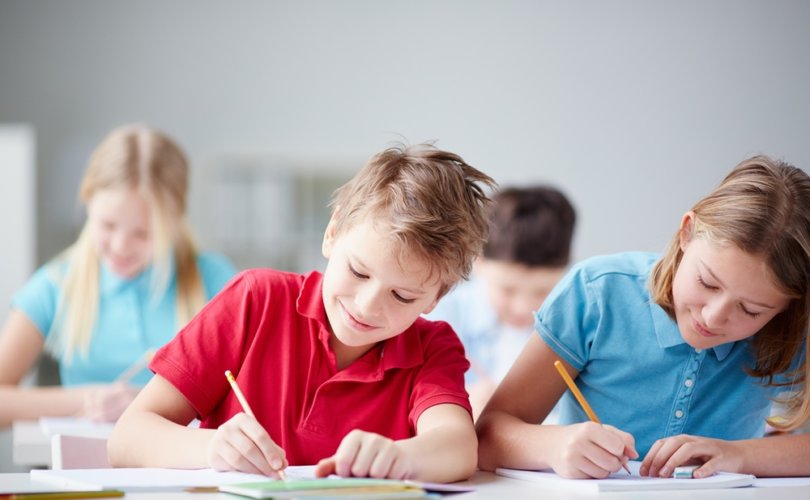 OHIO, August 14, 2019 (LifeSiteNews) — A sixth grade Ohio boy was pulled out of gym class in front of his classmates the day after his art teacher overheard him telling three girls his friend — who is “transitioning” to a girl — is “a boy, not a girl.”

The 11-year-old had been warned by the assistant principal earlier that May 14 morning that “there might be consequences” to asserting his friend is a boy, and referring to him with male pronouns.

“You can have your own beliefs,” but his friend “wants to be called a girl,” she told the student.

However, after Florida-based religious liberty law firm Liberty Counsel threatened legal action over the incident in July, the unnamed Ohio school board now says the student’s “temporary removal” from gym class was not “formal disciplinary action,” according to a Liberty Counsel press release.

Liberty Counsel is claiming victory after the school district also confirmed in a July 15 response from its lawyers that no student will be punished “for expressing respectful disagreement on the subject of transgender claims by other students.”

The board further confirmed it “does not discipline students for using certain pronouns in referring to students or coerce any student to use a particular pronoun.”

“Staff may inform students that a particular student prefers to be referred to as a particular pronoun. However, that would only occur with consent of the student and his or her parents, but no student would be required to use the preferred pronoun.”

According to a redacted letter from Liberty Counsel to the board documenting the incident, the student, or “John,” was a friend of “Boy A,” who began identifying as a girl in the spring of 2019.

Since that time, school administrators “including the assistant principal, the art teacher, and the music teacher, all refer to [Boy A] by female pronouns such as ‘she’ and ‘her,’” the letter related.

“Administrators have told other students that [Boy A] ‘is a girl,’ and that the students must call [Boy A] ‘she’ and other female pronouns, and consider him a female,” it stated.

Moreover, during art class, John sat at a table in front of three girls and Boy A and routinely was forced to listen to their conversations affirming the latter’s transition.

On May 13, the letter states, the girls claimed that “taking girl hormones” and getting his “male private parts removed” at a future date would turn Boy A into a girl.

John disagreed “as a factual matter” and said “he is a boy, not a girl,” and another boy at his table also agreed, saying: “Yeah, you are what you’re born with.”

The art teacher then reported the three boys for “bullying” and accused one of them of referring to Boy A as a “flaming homosexual,” an allegation John adamantly denied, the letter states.

John was sent to the assistant principal’s office the next day, and based on that conversation, understood “he must refer to [Boy A] as a girl and with female pronouns, going forward, or that he will be punished,” the letter stated.

The assistant principal pulled him from gym class in the afternoon, which made him feel “shame and embarrassment.”

The assistant principal called John’s mother that night saying John received a lesser punishment than the other boys because he was not seen to be bullying.

As a result of the incident, John’s parents contacted Liberty Counsel.

“The First Amendment protects a student’s right to hold his own views, and to respectfully share them,” the Liberty Counsel letter states. “This is especially true where the student shares his views in response to conversations to which he is repeatedly subjected by others against his will.”

“Moreover, the government may not take one side in a cultural or scientific debate, and turn classrooms into enclaves of totalitarianism,” it asserted.

“If ‘there is any fixed star in our constitutional constellation, it is that no official, high or petty, can prescribe what shall be orthodox in politics, nationalism, religion, or other matters of opinion or force citizens to confess by word or act their faith therein.’ West Virginia State Board of Education v. Barnette, 319 U.S. 624 (1943) (Emphasis added),” notes the Liberty Counsel letter.

The letter also noted that John “cannot in good conscience encourage [Boy A] in the false belief that he is a girl, through the use of false pronouns, or otherwise through agreement with the claim, because it would encourage [Boy A] in a fiction that may lead him to take harmful cross-sex hormones, and to seek non-medically necessary castration and removal of his ‘male private parts.’”

John “believes in telling the truth, especially where a friend believes something that is not true, and that false belief stands to seriously harm the friend’s health, as castration and cross-sex hormones would seriously and irrevocably harm [Boy A]’s health.”

“If [Boy A]’s parents have him castrated, he will grow up as a sadly mutilated boy.”