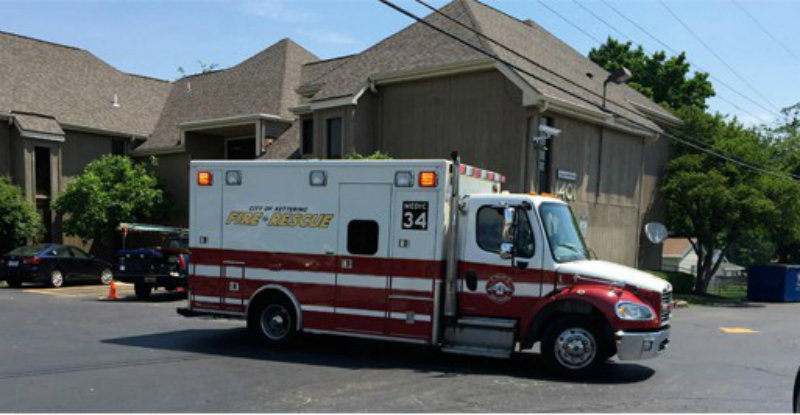 The ambulance that transported the woman from Martin Haskell's abortion facility.

KETTERING, Ohio, August 5, 2016 (LifeSiteNews) — The abortion business run by an infamous late-term abortionist and inventor of the Partial Birth Abortion infanticide procedure has allegedly performed an abortion without consent on a woman obviously high on heroin.

The woman arrived at Martin Haskell's Women's Med Center in suburban Dayton the morning of June 11, 2015, with the help of a friend. According to an investigative report issued by the Ohio Department of Health (ODOH), the woman literally could not walk on her own or hold her head up.

The woman's “friend” reported to Haskell's staff that she had taken “two Soma and several Percocet, and probably both Suboxone, and perhaps some heroin, on her way in.”

The abortionist was aware of the woman's “somnolent state,” yet did not ask her consent to abort her child. Only after the abortion (and its payment) did the abortionist treat the woman's overdose and transfer her to a hospital for, according to the ODOH report, “evaluation, monitoring and detoxification from the suspected drug overdose.”

The abortionist's official diagnosis, according to the ODOH report, was “suspected recreational drug overdose.”

Haskell’s entire staff was aware that the woman was under the influence of drugs, as evidenced in the ODOH report that noted they “aministered Narcan, a drug used to counter opioid overdose, but only after the physician performed the abortion.”

The ODOH report also stated that staff “confirmed in an interview” that the woman “had signs of recreational drug use.”

The ODOH investigation led to citing the abortion business for violating Ohio law, specifically “failure to ensure a patient was allowed to refuse or withdraw consent for treatment when her physical and cognitive condition precluded her from participating in her treatment.”

However, the ODOH report does not indicate whether the licensed physician who performed that abortion was sanctioned for breaking the law.

Dayton Right to Life has filed a formal complaint with the State of Ohio Medical Board against the three abortionists at Haskell's clinic.

“It is clear that the licensed physician(s) violated the law,” the complaint, signed by Dayton Right to Life Executive Director Paul Coudron, states. “The licensed physician(s) knew that the patient was under the influence of drugs and was semi-conscious. The patient was never given the opportunity to withdraw consent for the procedure, and could not have given legal consent given her state of mind at the time of the procedure.”

“Further, the licensed physician(s) did not administer medicine to stop the effect of the drug overdose until after she had completed the abortion,” Coudron continued. “This was a clear act of negligence that risked the life of the patient.”

Coudron pointed out that the abortionist risked the woman's life by delaying care for her obvious overdose. “The licensed physician(s) acknowledged the risk to the patient by having staff call EMS for transport to the hospital due to overdose. However, she also made sure to perform the abortion before having the patient transported for treatment and while the patient was physically and cognitively incoherent.”

The complaint concludes by urging the State Medical Board to investigate further. “The licensed physician(s) violated Ohio law and forced abortion on this patient, denying the patient a choice and potentially jeopardizing her health.”

“This facility clearly violated the very choice the abortion industry claims to stand for,” Coudron said in a press release.

State Medical Board spokeswoman Tessie Pollock confirmed to the Dayton Daily News that informed consent is essential to a physician’s standard of care.

Dayton pro-life leaders say the ODOH report offers more questions than answers. “We have so many questions regarding this incident,” Dayton Right to Life's Margie Christie told LifeSiteNews. “Who was the friend? Did the coercion begin before this woman even arrived at the clinic? And why does this clinic have Narcan? Has this happened before?”

“The complete disregard for this women's care and well-being is honestly heartbreaking,” the assistant executive director of advocacy and programs for the Dayton pro-life organization concluded. “But, unfortunately, this woman's health and the death of her unborn child are the 'costs' of abortion in today's society.”

The state’s Right to Life Society said the woman needed “real care, not an abortion.”

“Lack of cognition, slurred speech, indication that she had taken heroin — any one of these should have been more than enough to signal to the staff that the woman needed real care, not an abortion,” Ohio Right to Life Executive Director Devin Scribner said.

“This tragic story is an eye-opening look into the abortion industry … Ohio's abortion lobby forfeits whatever tinge of credibility it has if it refuses to condemn what happened at Women's Med Center.”

Haskell's clinic has a laundry list of citations dating to the 1990's. “They have operated without a license for years, and so these types of horrible incidents will only continue,” Christie predicted.

To rescind a physician's medical license for failure to receive informed consent is not without precedent. Ohio's State Medical Board did just that in 1988 against Dr. James C. Burt. Known as the “Love Doctor,” Burt lost his license for performing experimental surgery on women’s genitals, sometimes without their consent.

Haskell's facility terminates more than 35 babies a week, with the help of publicly funded Wright State University physicians. Despite being employed by the university, which as a state institution is strictly forbidden from any involvement in the abortion industry, physicians contracted with Haskell to provide “emergency backup services” at Miami Valley Hospital.

Maxlifer.com summarized, “The doctors are pursuing their own private pro-abortion agenda … at the expense of taxpayers.”