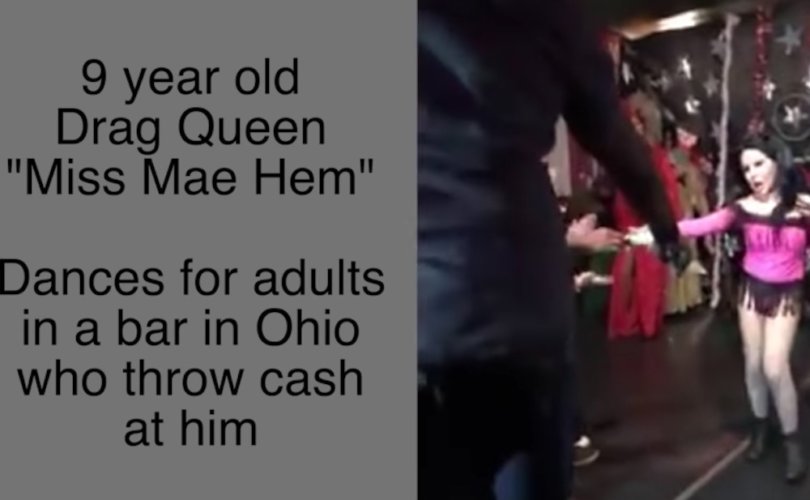 COLUMBUS, Ohio, April 24, 2019 (LifeSiteNews) – Lawmakers in Ohio are taking a stand against the sexualization of children by introducing new legislation that would ban drag shows and other sexually-suggestive or explicit performances from using minors.

“Given our heightened focus on human trafficking and the role money plays in trafficking children, I knew I had to take action to make sure this activity does not occur again. We can do better to protect innocent children and we must do better,” Schaffer declared in a statement.

Cleveland.com reported that HB180 is motivated in part by a drag event last December at JD Hendersons, a Lancaster-area bar where 9-year-old drag performer Jacob Measley, a.k.a. “Miss Mae Hem” danced in a suggestive costume while accepting dollar bills from an audience (ostensibly for a charitable event).

On January 30, Lancaster Republican Mayor David Scheffler issued a statement downplaying the incident by stressing that the “minor was fully clothed and was not touched by anyone in the audience,” that his parents were in attendance, that police found “no violations of city ordinances or state laws” and received “no new complaints of this activity” at the bar, and that the bar owners supposedly “did not approve” the activity and promptly banned the drag troupe upon learning about it.

In fact, Scheffler reserved most of his ire for the anonymous person who first publicized the incident by posting on Facebook a video to the “City of Lancaster” page. “I can only surmise that the ‘City of Lancaster’ Facebook poster hid behind the anonymity of the page because he/she knew that the scenario posted was a fabrication,” he complained. “There was no call to my office, LPD or JD Hendersons (I checked) to inquire as to the facts.”

In response, Republican state Senate candidate Melissa Ackison blasted Scheffler for “refus(ing) to condemn the performance,” and called for his resignation.

Jerri Measley told WTOL that she and her husband support their son’s participation in drag as an expression of his love of art, gymnastics, and dance. “What I am unwilling to do is compromise and not support the things my son wants to do,” she said. An August profile of Jacob in the Toledo Blade says the boy became interested in drag performances after watching RuPaul’s Drag Race with his mother. “Ninety-five percent of our friends are in the LGBTQ community and are drag queens,” his mother added.

Jerri says she’s outraged that her son’s performance is being cited as an example of child endangerment and insists he isn’t being sexualized. “I have altered everything so it is all past the knee,” she claimed. In fact, the Lancaster bar video shows the child in a much higher skirt exposing his thighs, and RuPaul’s Drag Race contains “frequent graphic sexual references,” according to the Internet Movie Database.

Further, the world of drag is infamous for its heavy sexual content, as are the stories of other child drag stars such as Nemis Quinn Mélançon Golden (a.k.a. “Lactatia”) and Desmond Napoles (a.k.a. “Desmond is Amazing”). Another trend, Drag Queen Storytimes directed at children in public libraries, have been described by performers themselves as intended to give children “unabashedly queer role models” and facilitate “the grooming of the next generation.”

HB180 has been referred to Ohio’s House Commerce and Labor Committee for further consideration.