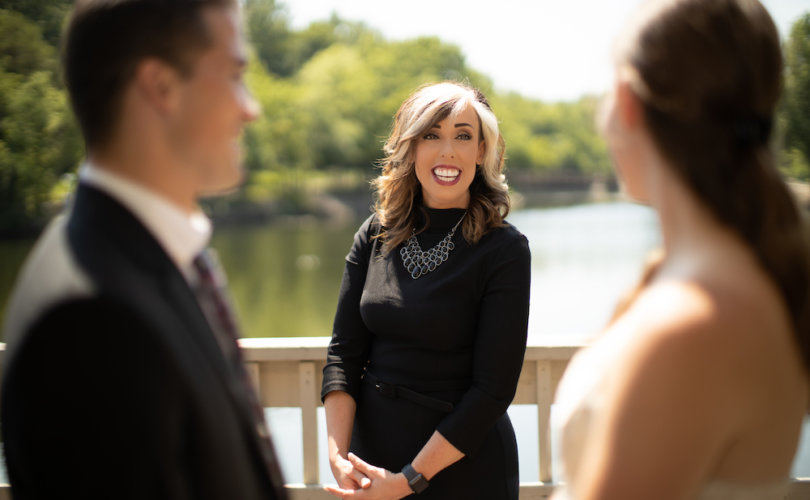 July 27, 2020 (LifeSiteNews) – A Christian minister has filed a federal lawsuit arguing that a local “anti-discrimination” law will effectively force her to officiate same-sex “weddings.”

Kristi Stokes owns Covenant Weddings, which offers marriage services as well as homilies, vows, and prayers for unions “between one biological man and one biological woman.” Represented by Alliance Defending Freedom (ADF), she is suing to block an ordinance adding “sexual orientation and gender identity” to local non-discrimination rules, which she says will not only force her to unite same-sex couples but forbid her from explaining why she only believes in heterosexual unions.

The ordinance penalizes violating businesses starting at $1,000 per violation, plus additional costs such as attorneys’ fees. Stokes says she has not faced such a suit yet, but realized she was in danger in December 2019, when she turned down a request to officiate a same-sex union and realized she could have been sued for doing so – despite the fact that the Cleveland area alone has more than 70 options for officiants who will serve same-sex “marriages.”

The danger is not hypothetical in jurisdictions across the United States, where Christians have been threatened and/or punished over their refusal to bake cakes, make invitations, shoot photographs, and provide venues for homosexual unions.

“My religious beliefs influence every aspect of my life, and I can’t simply put my religious identity into separate personal and professional boxes,” Stokes explains. “If you’re looking for someone to officiate your wedding, and you’re hoping to incorporate a cannabis theme or write prayers to celebrate an open marriage, I’m not your girl. Northeast Ohio is home to many diverse viewpoints, and I’m simply asking that my county also respect me, my business, and my freedoms as an American citizen instead of forcing me to write or speak messages that contradict my beliefs.”

“No one should be forced to officiate ceremonies that conflict with their religious beliefs,” ADF senior counsel Kate Anderson declared. “Because of Cuyahoga County’s law, Kristi faces an impossible choice: disobey the law, defy her own faith, or ditch her business. Many different religions and countless people of good will believe that weddings are sacred ceremonies between one man and one woman. No matter one’s views on marriage, we all lose when bureaucrats can force citizens to participate in religious ceremonies they oppose, speak messages they disagree with, and stay silent about beliefs they hold dear.”

In response, Cuyahoga County spokeswoman Mary Louise Madigan told The Plain Dealer that the county will review the lawsuit and “vigorously defend” the discrimination ordinance as “an important piece of legislation written and passed to ensure equal access and opportunity for all citizens.”