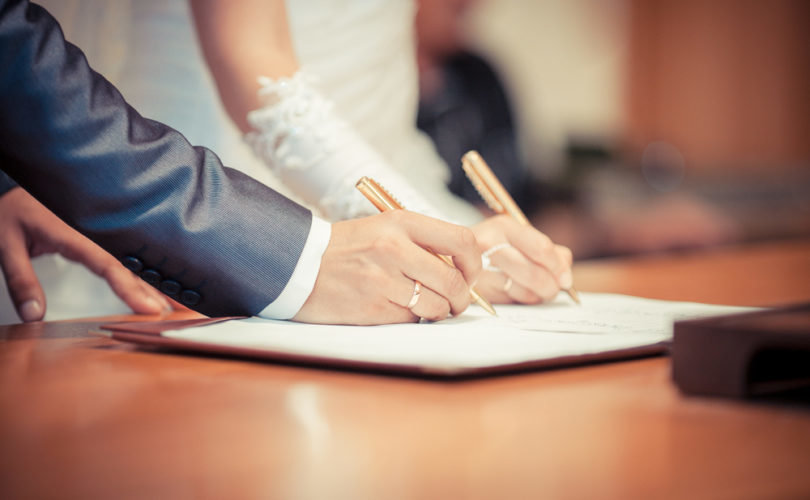 Ohioans are still standing behind the true definition of marriage, while homosexual activists are hoping that a judge will overturn the state's marriage amendment.

As judges country-wide are invalidating state marriage protection amendments, a new poll out of Ohio shows that not everyone is thrilled with the march toward a wholesale redefinition of marriage – in fact, the majority of Ohioans oppose making same-sex “marriage” legal.

Homosexual activists are currently gathering signatures for a petition to repeal the state’s marriage protection amendment, which was passed by 62 percent of voters in 2004 and constitutionally defines marriage as a union between one man and one woman.

But although the petition has already garnered more than 650,000 votes – far more than the 385,000 needed to appear on the ballot this year – sponsors of the effort have opted not to move forward with the initiative process because they’re worried they don’t have the votes.

According to a recent Columbus Dispatch poll, 46 percent of Ohioans oppose the proposed repeal of the state’s marriage protection amendment, compared to just 43 percent who support it.  Of those who oppose it, 33 percent say they feel very strongly about the issue, compared to 26 percent of those in support.

“We did not support . . . the idea of just rolling the dice and throwing it on the ballot before we built the support, campaign and war chest that would be likely to win,” Evan Wolfson, executive director of Freedom to Marry told the Washington Post.  “If you know there’s a chance you’re going to lose, you have to ask whether now is the time to fight it.”

“We can’t just be tilting at windmills. We have to go when the environment is conducive to a victory,” added Michael Premo, campaign manager for Why Marriage Matters Ohio, a pro-same-sex “marriage” organization.   “We’ve already lost at the ballot box once in Ohio. To lose again would be a huge boost of momentum to the opponents of equality who have not had a victory in a long time.”

“It’s our hope that courts take care of it,” Premo told the Post.

Currently, Ohio is waiting on a decision from the 6th Circuit Court of Appeals, which is considering a case brought by several homosexual couples seeking to force the state to recognize their out-of-state same-sex “marriages.”  A lower court judge previously ruled in the gay couples’ favor, but stayed his own ruling pending appeal.

Now, the entire nation is waiting to see what the 6th Circuit decides.  A ruling in favor of same-sex “marriage” is likely to open the door to multiple states’ marriage protection laws being invalidated, as has already happened in dozens of other states.  But if the court upholds Ohio’s marriage laws, it could trigger a review by the U.S. Supreme Court, which has so far refused to hear any appeal on the legality of gay “marriage” bans, since no Circuit Court has yet issued a contradictory ruling.

Meanwhile, in the face of sweeping changes in the legal landscape brought about by judges, public support for same-sex “marriage” – previously on the rise nationwide – has started to wane.  A September Pew poll found that support for gay “marriage” had dropped 5 percent since February, as state after state saw their voter-approved marriage laws overturned by federal appellate courts.

Speaking about that poll, Judicial Crisis Network Chief Counsel and Policy Director Carrie Severino told LifeSiteNews, “the public often resents it when an important and divisive issue is taken out of the realm of public debate and decided by judges.”

Comments by participants in the Dispatch’s poll seem to back that up.  “I am tired of the rights of the few trumping the rights of the many,” complained Carlos Rosario, 58, a maintenance manager/plant engineer from Youngstown.

In a letter to The Vindicator newspaper in Youngstown, James Brammer argued that judges who overturn the will of the people are engaging in their own form of discrimination.

“[T]he federal government has no right to force states to accept gay marriage,” Brammer wrote. “The people voted to ban gay marriage. Remember of, for, by the people. These people are being discriminated against also, wouldn’t you say?”