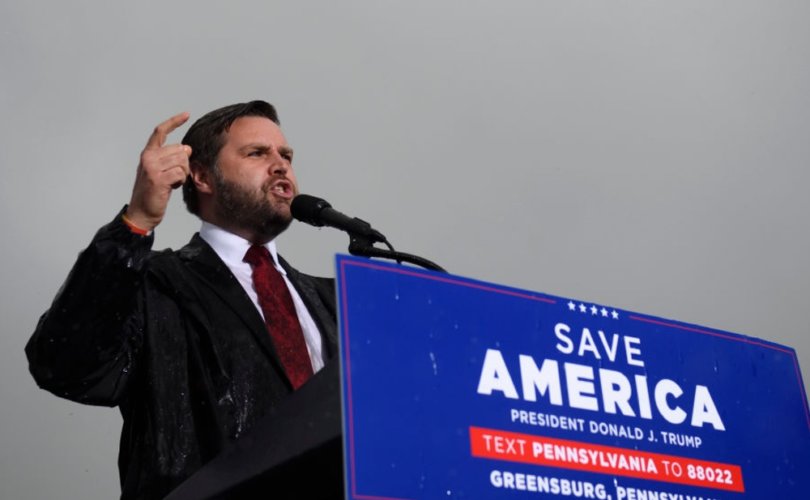 (LifeSiteNews) – Republican Ohio candidate for U.S. Senate J.D. Vance said Monday that he supports an exception for abortions in cases of raped minors, a departure from his own past comments on the question.

Vance made the comment during Monday evening’s debate with his opponent, Democrat Rep. Tim Ryan, while arguing that more similar choices could be avoided without Democrat immigration policies.

"Why was a ten-year-old girl raped in our community…the thing they never mention is that poor girl was raped by an illegal alien." pic.twitter.com/j2ImYbmt6w

“I have said repeatedly on the record that I think that that girl should be able to get an abortion if she and her family so choose to do so,” Vance said, referring to the case of an unidentified 10-year-old taken to Indiana for an abortion, which this summer abortion activists seized upon as a cudgel against state abortion bans, until it was revealed that her rapist was an illegal immigrant who had been placed on detainer for deportation.

“But let’s talk about that case,” he continued. “Because why was a 10-year-old girl raped in our community, raped in our state in the first place? The thing the media and Congressman Ryan, they talk about this all the time, the thing they never mention is that that poor girl was raped by an illegal alien, somebody that should have never been in the state in the first place. You voted so many times against border wall funding, so many times for amnesty, Tim. If you had done your job, she would never have been raped in the first place. Do you job on border security; don’t lecture me about opinions I don’t actually have.”

Vance’s answer contradicts both his campaign site, which declares he is “100 percent pro-life,” and a September 2021 interview in which he told Spectrum News 1 that, when asked about rape exceptions, “I think two wrongs don’t make a right. At the end of the day, we are talking about an unborn baby. What kind of society do we want to have? A society that looks at unborn babies as inconveniences to be discarded?”

LifeSiteNews has reached out to the Vance campaign for comment, and will update this report upon reply.

Vance, the Hillbilly Elegy author who in 2016 called former President Donald Trump “reprehensible” and attributed his support in part to racism (for which he has since apologized), has in the years since reinvented himself as a populist figure, earning Trump’s support and become a favorite among social conservatives for his hardline stances on issues such as immigration and pornography.

By allowing state abortion bans to finally take effect, the June overturn of Roe v. Wade energized pro-life voters but also sparked new fears among Republicans as to how the public will react. Some candidates in this fall’s midterms, including Blake Masters in Arizona and Scott Jensen in Minnesota, have responded by softening their official pro-life positions to varying degrees.

Vance’s opponent is no stranger to his own reversals on abortion. Once identifying as a rare “pro-life Democrat,” Ryan announced his reversal in 2015, citing conversations with post-abortive women and, paradoxically, the birth of his own son. Today, he holds a 100% pro-abortion voting record.