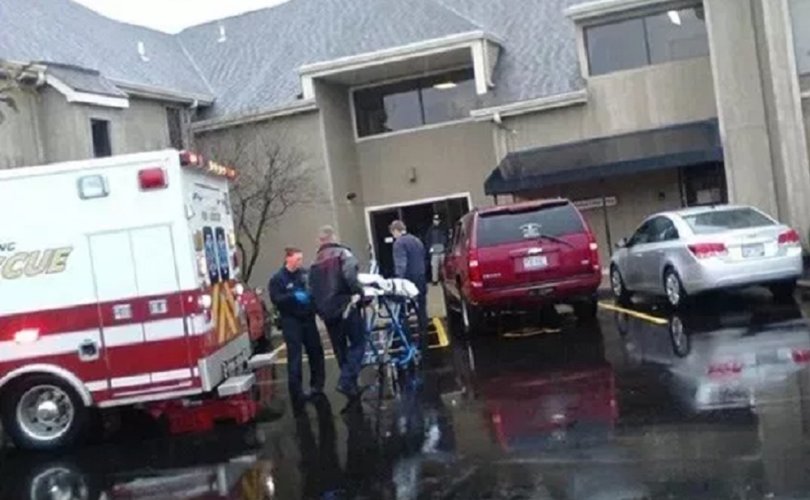 February 7, 2019: An ambulance arrives at Women's Med Center in Kettering, Ohio, to transport an unconscious, seizing abortion patient to the hospital. This abortion facility is known to conduct abortions throughout all nine months of pregnancy.Operation Rescue

DAYTON, November 14, 2018 (LifeSiteNews) — The Women’s Med Center of Dayton (WMCD) will be free to stay open despite its checkered history, thanks to the Ohio Department of Health granting the facility an ambulatory surgical facility license Wednesday.

In 2016, state health officials revoked WMCD’s license due to alleged rule violations. The center, which is roughly four miles away from two hospitals, has been unable to secure a written agreement with area hospitals to admit patients in cases of complications. But Jennifer Branch, an attorney representing WMCD, claims that the requirement is “medically unnecessary and politically motivated” because hospitals would be required to take emergency patients anyway.

County court judge Mary Wiseman let WMCD remain open while challenging the decision but went on to rule that the “court lacks the jurisdiction” to intervene in the case. The Ohio Supreme Court has since rejected the facility’s appeals, effectively forcing it to halt surgical abortions and only administer abortion pills.

However, the health department announced Wednesday it was granting the license after the center got four doctors to sign on as backup physicians for WMCD, the Dayton Daily News reports.

“Today’s news is a relief for patients across the Dayton area who depend on Women’s Med Center for comprehensive reproductive health care,” Planned Parenthood Southwest Ohio president and CEO Kersha Deibel said. “Ohio is among a growing list of states drastically restricting access to safe and legal abortion through laws that medical experts agree do not enhance patient health or safety.”

According to Operation Rescue, WMCD has a history of medical emergencies, including a 26-year-old woman hemorrhaging after a surgical abortion last month and an unconscious woman rushed to the hospital the month before after the abortion center’s staff were unable to treat her seizures. WMCD is owned by the infamous late-term abortionist Martin Haskell, who is credited with inventing the partial-birth abortion procedure.

“We are completely dismayed and disgusted with the Ohio Department of Health’s inability to revoke a license and then stand by that decision,” Dayton Right to Life executive director Margie Christie responded. “Abortion facilities continue to make a mockery of this Department and Ohio taxpayers. Taxpayers should truly question how their money is being spent fighting appeals, in this case for three years — only to have to have a new license put in place weeks later.”

Christie added that her group commends the “hard work and professionalism” of the state attorney general’s office but laments that “newly appointed Director of Health Amy Acton does not trust or appreciate their diligent work and is choosing to ignore the merits of this case. Additionally, Director Acton must not trust the judgment of our Supreme Court that heard the arguments and ruled in her department’s favor.”

“After a very promising start to the appointment of a new Ohio Department of Health Director’s tenure, it appears that the deep state within the ODOH is at it again with the issuance of a license to abortionist Haskell, a notorious law-breaker,” Right to Life Action Coalition president-elect Molly Smith lamented. “He and his clinic continue to endanger the lives of women in Ohio, and despite A.G. Yost and his attorneys doing an outstanding job to revoke this butcher’s license, ODOH has inexplicably issued him another license in defiance of the Ohio Supreme Court’s decision to revoke his previous credentials. This is atrocious.”

Dayton Right to Life notes that WMCD has aborted 47,000 babies since 2000, “making it one of the most prolific abortuaries in our state’s history.”