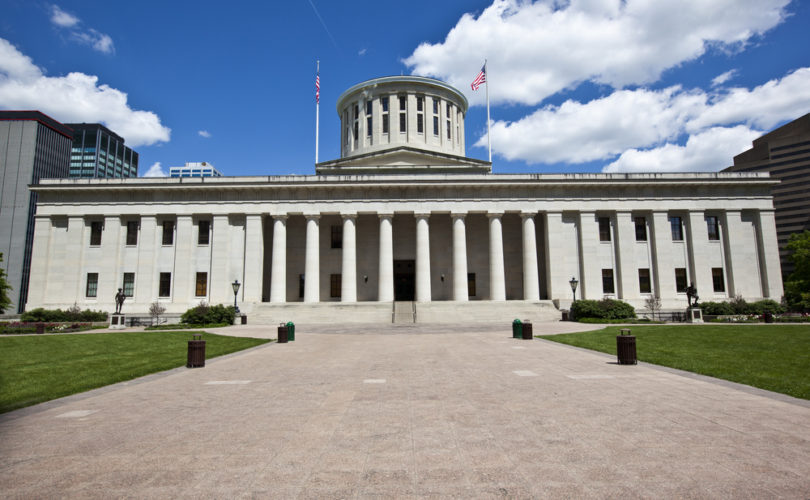 Because Ohio legislators were still in session (though they did not have a vote scheduled), a coalition of pro-life organizations throughout the state issued a letter calling for the state House and Senate to return to override Kasich's veto.

The bill that Kasich vetoed would have protected children in the womb as soon as their heartbeat can be detected. At the same time, Kasich said he was working hard “to strengthen Ohio's protections for the sanctity of human life.”

Across the state, pro-life activists expressed disappointment and anger that no action was taken on the Heartbeat Bill, which could save babies in the womb from abortion much earlier than the Pain-Capable Unborn Child Protection Act, as fetal heartbeats begin around 21 days after conception.

“Governor Kasich has long touted his pro-life credentials — and still does, even in the face of vetoing major pro-life legislation that could potentially have saved the lives of tens of thousands of Ohio’s unborn babies,” Brad Mattes, President of Life Issues Institute, sharply wrote in an online response. We are “saddened to see our state’s leading executive engage his veto pen to stop life-saving legislation in its tracks.”

“Our understanding was that supportive legislators' votes were there in the House and Senate to override the governor's veto and protect babies with beating hearts,” Paula Westwood, executive director of Right to Life of Greater Cincinnati, stated in a press release. “Many representatives in fact adjust(ed) holiday schedules to be ready to participate in an override session.”

Ohio ProLife Action president Linda Theis said she was “disappointed” that some legislators “paid by taxpayers to work through December 31st chose to be out of town when they knew there was a good chance they would be called back in for the override.”

Pro-life leaders, led by Janet Porter of Faith2Action, have been seeking to pass the Heartbeat Bill in Ohio for five years but have been thwarted by the pro-life governor and legislators.

The opposition to the Heartbeat Bill, which is the most pro-life legislation ever proposed, has divided those who stand up for the sanctity of innocent human life statewide.

Ohio Right to Life president Mike Gonidakis, who was appointed by the governor to the Ohio State Medical Board in October 2012, has actively worked with the Kasich administration to fight the Heartbill Bill in favor of the Pain-Capable Act.

Mattes wrote that it was “troubling” that Kasich defended his veto of the Heartbeat Bill by citing legal defense costs. “How can an elected official, who in his own words works 'to strengthen Ohio’s protections for the sanctity of human life,' put a price tag on their lives?”

“We have good reason to believe that the makeup of the U.S. Supreme Court and appellate courts are about to change,” Mattes wrote. “It’s not unfathomable to think that in the time it would’ve taken to get the Heartbeat Bill before the Supreme Court we may have a pro-life majority.”

“Even if the abortion industry had eventually prevailed in the courts, the educational value of the Heartbeat Bill would’ve been immense and invaluable,” he opined. “During the decade it took to get the Partial-Birth Abortion Ban passed, Americans’ eyes were opened to the ugly reality of late-term abortion.”

Mattes attributed the dramatic public opinion shift against Partial-Birth Abortion to “giving the pro-life movement the momentum that continues to this day.”

He noted that pro-lifers did not back down, despite then-President Clinton's repeated vetoes and an adversarial Supreme Court ruling, and in the end, Partial-Birth Abortion was banned throughout the United States.

That type of unity appears to be compromised in Ohio. Many Heartbeat Bill supporters believe the division isn't about court challenges but a battle of agendas.

Research biochemist Dr. Joel Brind, a professor of human biology and endocrinology at the City University of New York and an outspoken advocate of the Abortion-Breast Cancer link, has been following the controversy closely. He noted that Ohio Right to Life opposed the Heartbeat Bill in favor of the 20-week Pain-Capable Ban because the organization considers it to be a better judicial bet to challenge the Roe v. Wade legalization of unrestricted abortion from “viability” to slightly earlier in gestation when the baby can feel pain.

Dr. Brind said Ohio Right to Life's reasoning is flawed scientifically. “Viability is already at the earliest embryonic stage, thanks to in-vitro fertilization (IVF),” he pointed out. “This is made abundantly clear in the Sophia Vergara case. Here we have human embryos who are viable, for there are no doubt many willing women who would carry these children to full term.”

“It's not even about an 'unwanted pregnancy' anymore,” Dr. Brind summarized. “Rather, it's about humans being the disposable property of other human beings.”

“If the Supreme Court of the United States gauges that public opinion among pro-lifers is not in favor of moving back the viability line to the time of a detectable heartbeat, then why on earth would anyone think we had a shot at all at reversing Roe?” Brind reasoned.

Brind concluded that the Gonidakis group's fight against the Heartbeat Bill “is a serious error that will only set back the time when Roe is finally overturned.”

“Can you imagine pro-abortion activists accepting the same excuses if a governor whom they helped elect to office were to veto major pro-abortion legislation?” Mattes poignantly asked.