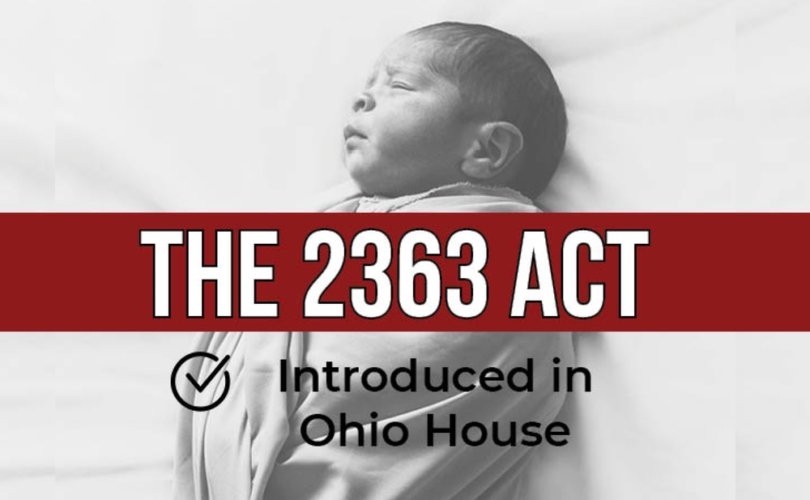 COLUMBUS, Ohio (LifeSiteNews) — As the Supreme Court hears challenges to Texas’ “Heartbeat Act” which bans abortions after a fetal heartbeat can be detected, Ohio Republicans have introduced a bill which goes a step farther than the Texas law, which appears to outlaw almost all abortions regardless of cardiac activity or gestation time.

On Tuesday GOP lawmakers in Ohio introduced House Bill 480, which defines  an “unborn child” as an individual human being “from fertilization until live birth.” The legislation would prohibit abortion by making it a crime for any person in the state to administer, procure, or sell “any instrument, medicine, drug, or any other substance, device, or means with the purpose to terminate the pregnancy of a woman, with knowledge that the termination by any of those means will, with reasonable likelihood, cause the death of the unborn child.”

“Notwithstanding any other provision of law to the contrary, no person shall purposely perform or attempt to perform an abortion,” the bill states.

The legislation states that exceptions to Ohio’s proposed abortion ban would be granted only to those whose assistance in an abortion was “designed or intended to prevent the death of a pregnant mother and the physician made reasonable medical efforts under the circumstances to preserve both the life of the mother and the life of her unborn child in a manner consistent with conventional medical practice.’” It is unclear whether such an exception would exclude the delivery of pre-viable babies.

Supported by over half of Ohio’s House Republicans, HB 480 is sponsored by Republican State Representatives Jena Powell and Thomas Hall as well as 33 Republican co-sponsors.

“The sanctity of human life, born and preborn, must be preserved in Ohio,” said Rep. Powell in a statement, adding that the bill, also known as the 2363 Act (an estimated 2,363 children are killed in America through abortion every day), is “about protecting our fundamental, constitutional right to be born and live. Abortion kills children, scars families, and harms women. We can and must do better.”

On the chamber floor Powell affirmed that HB 480 is intentionally similar to the Texas pro-life law, noting that the Ohio bill “utilizes the enforcement mechanism from the successful Texas Heartbeat Act” which empowers private citizens to file civil lawsuits seeking $10,000 or more against anyone assisting in the procurement of an abortion except the pregnant mother.

Going a step farther than the Texas law, which bans abortions after a fetal heartbeat can be detected – usually around six weeks gestation – the Ohio bill would prohibit any abortion at any time during the pregnancy.

“[T]he Ohio law does not set a benchmark for a legal abortion timeline, potentially leaving it open to encompass all abortions ranging from one week of pregnancy to the last trimester,” the National Review stated.

The bill also explicitly bans chemical abortions, removing an option which has gained increasing popularity during the COVID-19 pandemic as physicians have mailed abortion drugs to expectant mothers, and currently accounts for some 40% of U.S. abortions.

While the Biden Administration has sought legal action against Texas for its heartbeat law, contending that “It is settled constitutional law that ‘a state may not prohibit any woman from making the ultimate decision to terminate her pregnancy before viability’,” Powell argued on the chamber floor that the 1973 Roe v. Wade decision legalizing abortion in the U.S. was “based on precarious legal foundations.”

In an interview with Live Action, Powell explained that the Ohio bill is not the only one of its kind and is not exclusively based on the Texas law.

According to Powell, the act is “based off of the Arkansas Unborn Child Protection Act, which was signed into law earlier this year, but we’ve made a couple of changes.”

“This bill uses the enforcement language by the Texas Heartbeat Act, which has been upheld by the 5th Circuit Court,” she said, adding that “Alabama, Louisiana, Arkansas, and Utah” have “recently passed similar pieces of legislation.”

Meanwhile the writers of the Ohio legislation state that their authority to implement such a sweeping law defending the lives of the unborn derives from the language of the Declaration of Independence itself, citing the founding document by noting that “[a]ll human beings are created equal and endowed by their creator with certain unalienable rights; among these are life, liberty, and the pursuit of happiness,” and that “to secure these rights, governments are instituted, deriving their just powers from the consent of the governed.”

It remains to be seen whether the bill will ultimately become law in Ohio, with its success depending in large part upon the Supreme Court.

On Monday the United States’ highest court convened to hear arguments in multiple cases that could determine the fate of the Texas Heartbeat Act and any similar legislation proposed or enacted in other states.

Beginning December 1, the Supreme Court is also set to hear arguments in the much-publicized Dobbs v. Jackson Women’s Health Organization case, which asks the court to rule on the constitutionality of abortion restrictions before viability.

The crucial case has been closely watched by pro-life and pro-abortion advocates alike and has the potential to overturn Roe v. Wade and Planned Parenthood v. Casey, the two landmark cases which cemented a “constitutional right to abortion” in the United States.