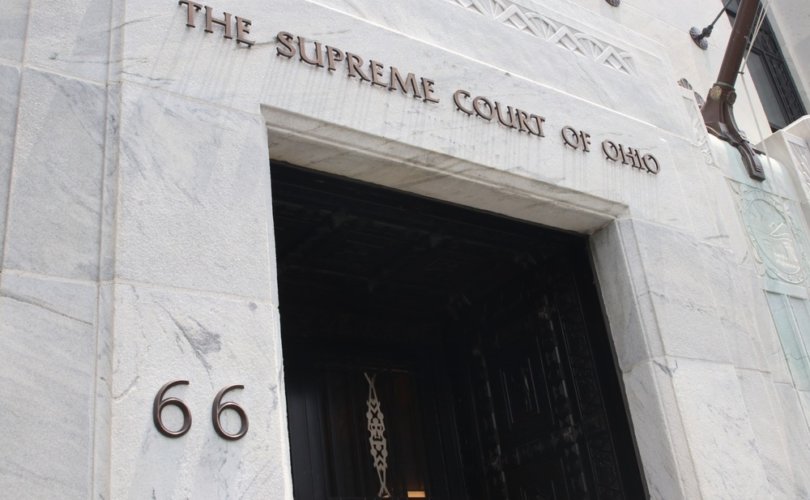 COLUMBUS, Ohio (LifeSiteNews) — The Ohio State Supreme Court on Friday shot down a request for an emergency stay on the state’s ban on abortions after an unborn baby’s heartbeat can be detected. The decision allows the pro-life law to remain in effect while the Court reviews a lawsuit seeking to reverse it, The Cincinatti Enquirer reported.

The state’s life-saving law, which bans abortions after about six weeks gestation, is currently being challenged by Ohio abortion clinics. The Enquirer reported that the clinics assert that the Ohio Constitution protects a woman’s “right” to abortion, even if the U.S. Constitution, per the June 24 ruling in Dobbs v. Jackson Women’s Health Organization, does not.

Check out this article from https://t.co/mHHV59odq4:

The Ohio Court’s refusal to delay enforcement of the law comes after the U.S. Supreme Court overturned Roe v. Wade in its landmark Dobbs v. Jackson decision late last month, returning the right to regulate abortion back to the states after 49 years of federal abortion precedent.

Shortly after the ruling was handed down, a federal judge granted a request from Ohio Republican Attorney General Dave Yost to let the state’s 2019 heartbeat law take effect.

The law is similar to the Texas Heartbeat Act, which became law in 2021 and has survived numerous legal challenges.

Heartbeat laws like those enacted in Texas and Ohio effectively ban nearly all abortions, since most women don’t even know they’re pregnant at six weeks. Since Texas passed its Heartbeat Bill last year, many other Republican-led states have enacted similar legislation to protect the unborn.

Ohio’s heartbeat law had been stalled in the courts leading up to the reversal of the federal “right to abortion” established in Roe.

“The heartbeat law has been sitting on the sidelines in federal court which could’ve saved countless lives over the past several years,” Ohio Right to Life President Mike Gonidakis said in a statement last week, The Epoch Times reported. “Starting right now no baby with a beating heart can be aborted in the state of Ohio.”

“Regardless of whether one interprets the Ohio Constitution through an originalist or living-constitutionalist lens, the Constitution does not confer any right to abortion,” he said.