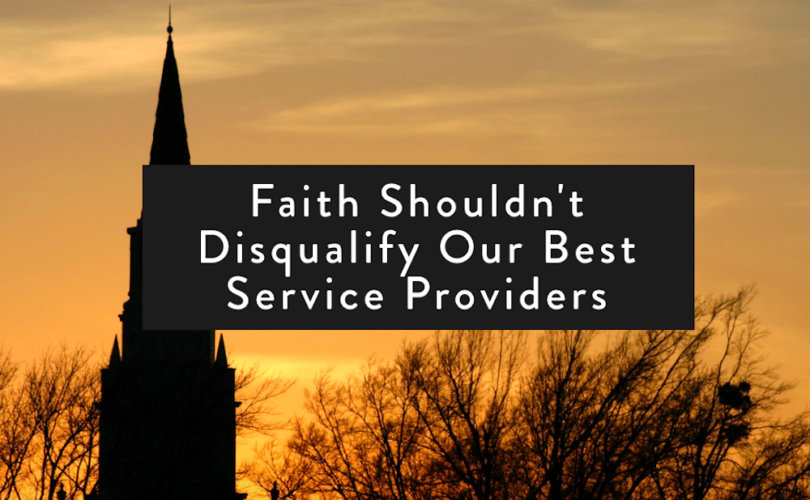 OKLAHOMA CITY, Oklahoma, November 4, 2016 (LifeSiteNews) — On Tuesday, Oklahomans will vote on a ballot measure that direct impacts autistic and other disabled children as well as Christian-run schools, hospitals, homeless shelters, and charities throughout the state.

“State Question 790” seeks to remove a Blaine Amendment from the Oklahoma State Constitution. The “Blaine Amendment” keeps any charity or organization with religious affiliations from competing for state funds — even if the charity is providing the highest quality services.

“Blaine” Amendments are named after James Blaine, who in 1875 unsuccessfully proposed an amendment to the U.S. Constitution that read:

“No money raised by taxation in any State for the support of public schools, or derived from any public fund therefore, nor any public lands devoted thereto, shall ever be under the control of any religious sect; nor shall any money so raised or lands so devoted be divided between religious sects or denominations.”

Because there was a prevailing anti-Catholic sentiment at the time, the amendment passed in the U.S. House but came only four votes shy of passing in the Senate. However, many states adopted Blaine Amendments into their state constitutions.

In order to join the Union, several states were forced to adopt Blaine Amendments, which were designed to prohibit funding to Catholic schools in immigrant communities, no matter how high the quality of education those schools gave immigrant students.

U.S. law already forbade public funding for churches or for proselytizing, but the Blaine Amendment stopped any public support for religiously-affiliated service organizations, even if those organizations provided vital social services and were the only ones doing so.

Supporters of repealing the Blaine Amendment in Oklahoma include faith-based charities and non-profit organizations who help the poor and disadvantaged, as well as schools founded by religious entities. Oklahoma Senator James Lankford, state Attorney General Scott Pruitt, former Governor Frank Keating, and a bipartisan majority of state legislators have come out publicly in favor of repealing the 109-year-old amendment.

Leading secular organizations are opposed to repeal, wanting to keep the Blaine Amendment in the state constitution, including the Freedom From Religion Foundation (FFRF), the American Civil Liberties Union (ACLU), Americans United for Separation of Church and State (AUFS), and the Satanic Temple.

The age-old law has come into focus recently because several anti-Christian groups have used it to sue the parents of disabled children and the Oklahoma Board of Education.

A lawsuit was filed against parents over a state scholarship to disabled children whose local public school couldn’t adequately meet their needs – and which actually saves the state money by eliminating the need to create programs in each local school.

The lawsuit was dismissed, but another lawsuit was filed against the Oklahoma Board of Education over the same scholarship. Atheists lost this case as well, but at such taxpayer expense that the state legislature proposed removing the Blaine Amendment.

The Blaine Amendment has also been used to successfully sue Oklahoma for the removal of a statue of the Ten Commandments from the state capitol. And in Florida, a similar Blaine Amendment was used by atheist groups to sue a successful and cost-effective ex-convict rehabilitation program.

Removal of the Blaine Amendment will impact parochial schools as well. The U.S. Supreme Court upheld the constitutionality of the school voucher programs in 2002 (Zelman v. Simmons-Harris), but secular groups threaten to use the state's Blaine Amendment to stop such programs.

OklahomaBlaine.org states that “removing the Oklahoma Blaine Amendment would not affect the U.S. Constitutional prohibition against taxpayer money being used to support worship services or proselytization. Religiously affiliated service providers would also still be required to follow laws ensuring they did not discriminate in the delivery of services.”

“But if it is removed, Blaine could no longer be used as an excuse to try and block taxpayer money from going to organizations that provided the best and most cost-effective services to Oklahoma residents simply because those services are motivated by the provider's faith,” the website explains.

A “yes” vote on Question 790 will remove the anti-Christian Blaine Amendment and a “no” vote will leave it in the Oklahoma State Constitution.

A video of one of the families affected by the ballot can be seen here.

Thirty-seven states have some form of Blaine Amendment in their state constitution. The Becket Fund for Religious Liberty is currently challenging the legality of several such amendments.