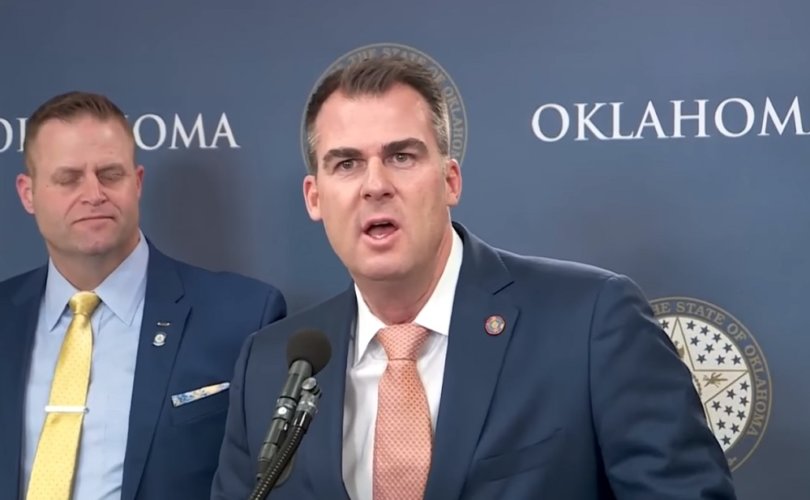 As of the time of writing, with 99% of Oklahoma’s districts reporting, Stitt has secured a victory of more than 150,000 votes over Democrat challenger Joy Hofmeister, giving him a comfortable 56% of the vote and a 14-point lead.

“Oklahomans stated loud and clear today they are proud of how far we have come,” Stitt said Tuesday evening.

A Christian and father of six, Stitt has proven a staunch defender of the unborn, signing into law in April 2022 the “Life at Conception” bill, which makes abortion at any stage of gestation a criminal felony, except in cases of “medical emergency.”

“I promised Oklahomans that I would sign every pro-life bill that hits my desk and that’s what we’re doing today,” Stitt said in April as he signed the legislation. “We want Oklahoma to be the most pro-life state in the country. We want to outlaw abortion in the state of Oklahoma.”

Prior to the Supreme Court’s Dobbs decision, Stitt also signed a Texas-style heartbeat law allowing for civil lawsuits over abortions performed after a baby’s heartbeat is detected.

READ: New Oklahoma law will ‘stop the murder of the unborn,’ make it a felony to kill babies via abortion

In April, Stitt signed a law requiring that Oklahoma’s birth certificates only indicate male or female as child’s biological sex, expressly banning any “non-binary” options on the certificate. The previous November, the governor had signed an executive order mandating Oklahoma’s Department of Health to stop changing or issuing birth certificates with an option for a “non-binary” marker. In a statement on the issue at the time, Stitt  said,  “I believe people are created by God to be male or female. Period. There is no such thing as a non-binary sex.” Regarding the bill in April, Republican state Rep. Sheila Dills said it was simply codifying the governor’s November executive order.

Stitt has also strongly opposed critical race theory (CRT), launching an investigation against schools that violated the state’s laws against teaching CRT. In a statement on the issue, the governor said, “I firmly believe that not one cent of taxpayer money should be used to define and divide young Oklahomans by their race or sex. Let’s teach students, not indoctrinate them.”

This year, Stitt came to the defense of women by banning “transgender” men from participating in women’s sports. Such bans, he said, were “common sense,” explaining that his aim “is very, very simple. We are protecting women’s sports.”

He said the legislation is “ensuring a level playing field for female athletes who work hard, who train hard, who are committed to their team. Who have dreams to be number one in their sport. Who deserve a fair competition.”

Together with Florida Gov Ron DeSantis, in 2021 Stitt opposed the implementation of the Biden administration’s COVID vaccine mandate for businesses and took legal action against the federal government.

“This administration has no respect for individual freedoms,” Stitt declared in October 2021.  “I can’t believe we have a president who wants to force Americans to choose between a vaccine and their job. The people this is affecting aren’t just statistics, they’re real Oklahomans, with real concerns. They’re brave nurses and caretakers, they’re expectant mothers and fathers, they’re first responders and brave law enforcement.”

“Getting the vaccine is a personal choice. Period.”

“By signing this bill today,” Stitt said in a press release on Oct 4, “we are taking the first step to protect children from permanent gender transition surgeries and therapies. It is wildly inappropriate for taxpayer dollars to be used for condoning, promoting, or performing these types of controversial procedures on healthy children.”

“I am calling for the Legislature,” Stitt continued, “to ban all irreversible gender transition surgeries and hormone therapies on minors when they convene next session in February 2023. We cannot turn a blind eye to what’s happening all across our nation, and as governor I will not allow life-altering transition surgeries on minor children in the state of Oklahoma.”

Tuesday’s victory confirms that Oklahoma will remain a red state and that Stitt’s protections of the unborn, women, and children will continue in the Sooner State.