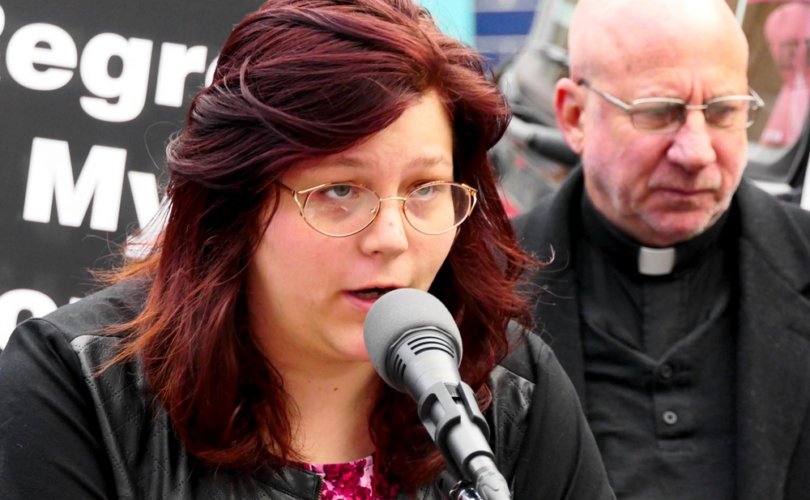 January 22, 2018 (LifeSiteNews) – Two pro-life activists appeared in court today — on the 45th anniversary of the Roe v. Wade abortion-decision — for entering an abortion facility and offering red roses to the mothers inside, pleading with them to choose life for their pre-born babies.

The case was postponed until March 9, 2018, when the activists will be charged for trespassing. The pro-life activists on trial will be 24-year-old Lauren Handy and Linda Mueller, a mother of six. It’s possible that the third rescuer who was arrested with them that day, Michael Webb, will also be tried with them.

At least 12 people came to court to watch and support the rescuers. Mueller made it to court despite being hit by a garbage truck on her way.

Handy told LifeSiteNews that the red roses they distributed inside Alexandria Women’s Health Clinic symbolize “the gift of life, an act of charity” and for Catholics, the Blessed Virgin Mary.

The Red Rose Rescue movement was inspired by Canadian pro-life activist Mary Wagner, who regularly conducts such rescues in Canada. She has been imprisoned multiple times for doing so and is currently still in prison. A contingent of American pro-lifers protested outside the Canadian embassy during the 2018 March for Life on Friday, asking for the release of Mary Wagner.

There have been six Red Rose Rescues in the U.S. so far. They took place in Virginia, Michigan, and New Mexico in September 2017 and Washington, D.C., Virginia, and Michigan on December 2, 2017.

The only Red Rose Rescue where the pro-life activists chose not to risk arrest was in Albuquerque, New Mexico in September 2017.

The Alexandria abortion facility for which Handy, Mueller, and Webb face trespassing charges was also the location of the September 15, 2017, Virginia Red Rose Rescue. Six pro-life activists – including two Catholic priests – were arrested then.

The lawyer representing Handy and Mueller is William E. Hassan, who during the late 1980s and early 1990s defended rescuers in court.

Once, “he represented the largest group of rescuers in Virginia,” said Handy. “So at one point, he represented 127 people at one time” in the same case.

The judge presiding over the Virginia Red Rose Rescuers’ trial is the Hon. Becky J. Moore.

On December 2, 2017, Handy, Mueller, and Webb entered Alexandria Women’s Health Clinic, which is an abortion facility located inside an apartment building. They were inside the abortion facility for nearly an hour before being arrested.

“I’m not really feeling anxious or worried or anything like that,” Handy told LifeSiteNews before her court appearance. “If anything, I’m excited to be able to defend the babies on the anniversary that signed their death warrant.”

Handy runs Mercy Missions, a Washington, D.C. area-based pro-life ministry. She spends most of her days sidewalk counseling outside the abortion facilities in the D.C. metropolitan area. Her activism also includes collecting bras and hygiene products for women’s shelters and helping the homeless.

Handy is a regular outside Planned Parenthood’s massive flagship abortion facility in Northeast D.C., despite long days of unpleasant weather and the presence of hostile pro-abortion “escorts” who try to prevent mothers from talking to her.

Handy lives with her parents and fundraises all of her small salary, which she uses to pay for activism and pregnancy help supplies.

But for the next five months, she will live in New Jersey with her mentor Joan Andrews Bell and enter the pro-life lay apostolate Gloria Dei. Handy will return to Virginia for her trial in March.

Handy said she decided to participate in the Red Rose Rescue movement because she “came to the realization that my actions were not…proportionate to the mass killing of humans.”

“I looked to Scripture to see what an example is of what Jesus would want me to do to love those who are going in to be slaughtered,” said Handy. “And I came to the realization when I read the parable of the Good Samaritan that it’s non-violent, direct action.”

A lot of people are “uncomfortable with the thought of breaking the law,” she said. “But it’s important to remember we are supposed to obey God’s law, which is higher than civil law. And in the end, love has no boundaries. What we are doing are radical acts of love.”

Several hours after she was arrested, Mueller told LifeSiteNews she’d “kind of been itching for something real to do for years,” and had been following Wagner’s activism in Canada. She didn’t know there were similar efforts in the U.S. until she saw Facebook posts about the rescues from Father Stephen Imbarrato.

“A lot of people are criticizing Red Rose Rescues because they’re defining success as how many babies were saved or how many people joined,” said Handy.

The Red Rose Rescuers “going into the abortion [facility] lobby” is “the only act of love these babies will have in this temporal world,” she said. “So instead of defining our ‘success,’ we need to be asking, ‘how many babies did I love that day?’ And for my Red Rose Rescue on December 2, there were around 20 women going in for abortions. And, the thought of 90 days in jail is worth it knowing that I was able to show love to those children.”