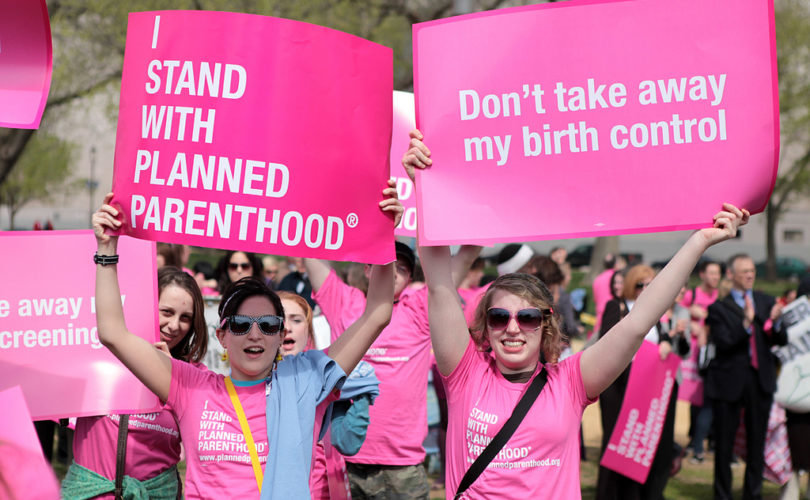 “In my view, to take away health choices from American women that have nothing to do with abortion, particularly after the horrific acts last week in Colorado, is a tone-deaf act of legislative malpractice that is beneath the United States Senate. Fortunately, it faces an imminent veto pen if it hits the president's desk,” said Wyden.

Wyden called the defunding effort “another partisan attempt to undermine women's health” and said pro-life politicians are attempting “to take away health care choices from women that have nothing to do with abortion, particularly after the attack in Colorado last week.”

Connecticut Democratic Senator Richard Blumenthal also tied last week's attacks to the funding fight in both floor comments and a Tweet. “The dedicated professionals of Planned Parenthood have braved threats and intimidation for years…and undoubtedly they will continue to do so.”

Blumenthal's and Wyden's comments followed an aggressive back-and-forth between leading pro-life Senator James Lankford, R-OK, and radical abortion supporter Senator Barbara Boxer, D-CA. In his initial comments on the Senate floor, Lankford said that “no one who speaks for life goes and takes a life. No one who speaks for the life of children runs out and takes the life of adult, and says that that's justifiable. It's not justifiable. It's horrific. But just like those individuals who speak tenaciously against religion shouldn't be silenced because there is a shooting in a church and saying people that are anti-faith should suddenly have no voice in America because an irrational person shoots someone in a church, it is the same that individuals who speak out for the life of children shouldn't suddenly be silenced by being screamed down because an insane person does a shooting in a clinic. Both of them are wrong.”

Lankford also spent a significant portion of his speech refuting the claim that defunding Planned Parenthood “is all about going after women's health,” noting that he is “a very proud husband of a very beautiful lady and a proud dad of two beautiful daughters, and as a son of a breast cancer survivor[.]”

“… this has nothing to do with going after women's health, nor demonizing women, nor the war on women, nor all the other accusations that I've recently heard,” he stated. “This is not about protecting a – what I heard called a life-saving health care organization, where 325,000 children died in it last year. This is about a simple thing: children.”

“Why would we continue to supplement the death of children?” asked Lankford, shortly before pivoting to address the shooting.

Following Lankford's comments, Boxer said she was “offended” by the Republican senator's “rhetoric.”

“Then why doesn't he come down here and write a law that says, 'It's a crime to have an abortion, and you should go to jail'?” asked Boxer. “That's what he's basically saying, if you listen to his rhetoric.”

After listing services provided by Planned Parenthood, the retiring California senator said that Republicans would not put forth legislation criminalizing having an abortion because voters would oppose it. She also strongly implied that Republicans want to criminalize contraception.

“Some of them feel that way, not all of them,” she clarified. She also said that Lankford had called abortion a crime.

Many of Boxer's comments were personally directed at Lankford, in violation of Senate rules, something both Lankford and the acting Senate president pointed out after she was done speaking. Responding to Boxer, Lankford also said it “doesn't seem to be offensive” to talk about babies have fingers and toes, and he pointed out that his comments didn't promote or mention making criminals of women who have abortions.

Pro-life senator: Killing late-term unborn babies is ‘not who we are as a nation’