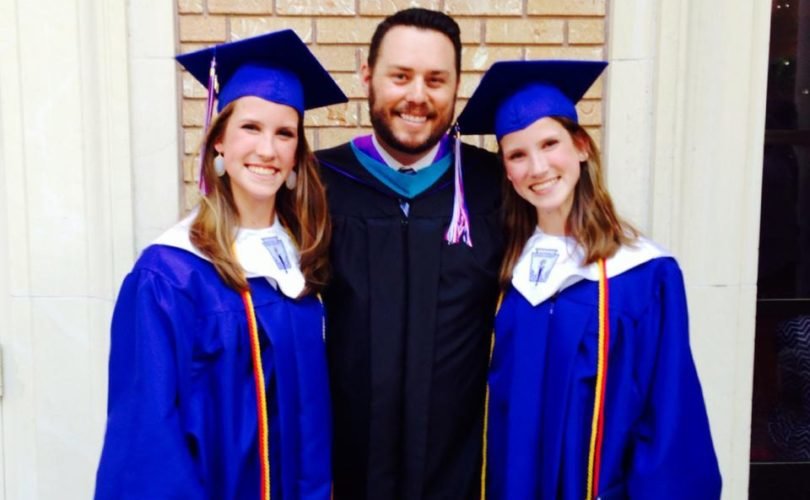 The twins' mom, Crystal, told LSN that she only came to terms with the fact that she considered aborting them this year.

Just over 18 years ago, Emily and Caitlin Copeland left their mother's womb, conjoined. Now, the girls are set to leave their hometown of Houston, Texas to different universities after graduating from high school as co-valedictorians. This will be only the second time in their lives that they will be apart from one another.

Just days after Emily and Caitlin turned 18, their mother, Crystal Copeland spoke with LifeSiteNews about how the dark time of finding out the girls were conjoined, and considering the possibility of aborting them, turned into a blessing and the knowledge that she and her family “wouldn't change a thing.”

Crystal and John Copeland, highschool sweethearts who “met in home room” and got married right out of college, were a typical young couple. Then she got pregnant, and the diagnosis of conjoined twins came. To the couple, it seemed to be the end of the world.

“Neither my husband nor myself were raised in a church,” Copeland told LifeSiteNews. “At the time that my husband and I found out that we were pregnant, we were not part of a church, we did not study the Bible. We both believed in God, but didn't really understand what we were believing.”

“So we got the diagnosis, and it was an extremely dark time. I had always prayed, all my life, and I prayed heavily that weekend, when we were waiting to find out what the surgeons thought when they looked at the ultrasound video.”

Despite knowing the right decision was made almost two decades ago, Crystal says she only came to terms with the fact that she even considered abortion this year.

The waiting wasn't easy, as doctors examined the results of the ultrasound. “We did have friends and family who felt that we should abort the pregnancy. Not having faith front and center in my life at that time, I worried all the time — I don't know what I would have done if they had come back and told us they did share a heart, that they would not have been able to survive, I agonize over that. I don't know what I would have done.”

According to Copeland, the girls were 17 weeks past gestation, and “they were kicking, they were moving, I could feel them, they were very real to me. We already had names picked out. It was very traumatic.”

“We were looking for any lifeline, anything that we could latch on to for hope. And when the surgeons came back and said, 'we've reviewed the ultrasound, we think they're only sharing a liver, and we think they have good possibilities for separation,' we grabbed onto that.

We talked about it, and we decided that if there was a chance that at least one of them could survive, and have a normal life, then we would continue the pregnancy.”

Copeland says that the couple was “given the option” for abortion, “because [doctors] did not know if the girls were going to share a heart, which is a fatal complication, that kind of thing.”

Crystal says that choosing life for her babies, and raising Emily and Caitlin in difficult circumstances helped her and her husband realize inner strength. “I have a terrible fear of blood,” she explained, giving one example. “I've been known to almost pass out getting a paper cut, it's that bad. But the girls obviously had a lot of surgeries and they had to have a lot of central lines run, directly into an artery on their chest.” And while she would have preferred to leave the area while nurses handled these responsibilities, the medical professionals told her that children get agitated when their mothers are not around.

“They were little tiny babies,” Crystal said. “So I sat in on more of those than I can even remember. And they were horrible, but I did it because my kids needed me to be there and do it.”

Crystal says she got so good at home health care – her daughters had larges holes on their abdomens from the separation surgery – that a home health nurse said she would “hire me in a minute.”

“I did all kinds of horrible stuff, and I got through it,” said Crystal. But she added that she could only do it for her kids. “You rise to the occasion when you have to, then it's gone.”

Raising Emily and Caitlin also helped the Copeland's marriage, she said. “It really made us stronger. I know a lot of marriages that are tested can't handle the pressure. It really brought us a lot closer together, and really solidified our marriage in a good way.”

However, some of the wounds from that period have healed more recently. Despite knowing the right decision was made almost two decades ago, Crystal says she only came to terms with the fact that she considered abortion this year. “I've thought about it over the years, and wondered if I had not gotten that lifeline, what would we have done?”

“A few months ago, I found out about a family in Houston who had a similar diagnosis — they were carrying conjoined twins connected in the same way that Emily and Caitlin were, and they decided to end the pregnancy. When I got that news — I don't even know these people, I don't know their names, I don't know anything about them other than that fact that they were in my shoes, basically — I was so upset, I cried the whole way home.”

With her daughters heading to different universities — Emily to Houston to be a wedding planner, and Caitlin to Concordia University in Austin to be a Lutheran schoolteacher — Crystal says she is “looking at some wide-open time come August.” With both girls in band, as well as cheerleading (Emily) and softball (Crystal), Crystal says that her “appointment book was full.”

As her girls head off for their second lifetime separation, Crystal says that she is “so proud of them. They are the most competitive, driven girls — all on their own, in their heads. They accomplished everything they wanted to in high school, and they have no regrets.”

Having been in the same classes in small schools their whole lives, Crystal's girls are “very worried about going to separate schools.”

“This is going to be really hard on them.” However, modern technology — iPads and Facetime — will allow Crystal's once-conjoined daughters to continue to be together, even as life takes them in separate directions.