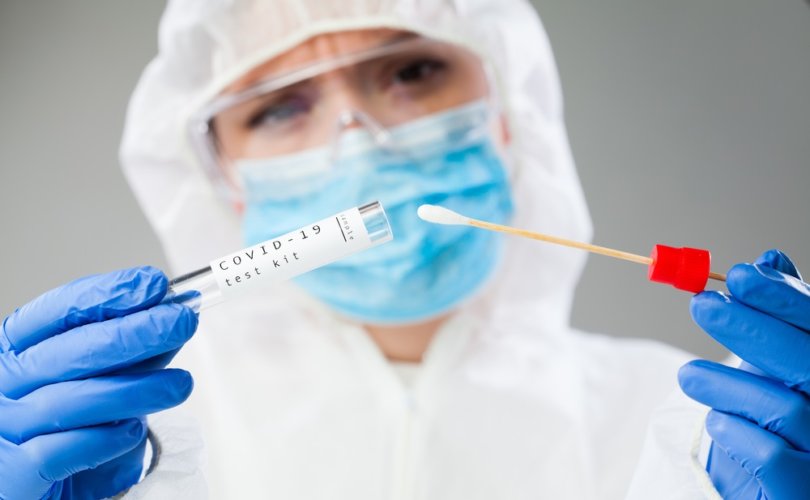 January 22, 2021 (LifeSiteNews) — In what some have suggested is politicized timing, the World Health Organization on Wednesday changed the protocol for COVID-19 tests, which will result in large reductions in the numbers of positive cases. The body took this action just one hour after Joe Biden was sworn in as president of the United States.

On Wednesday, the World Health Organization (WHO) issued guidance regarding the polymerase chain reaction (PCR) test, which is being widely used across the globe in order to detect cases of COVID-19. In a short information notice, the WHO referred back to an instruction booklet for COVID testing, released in September 2020, noting that “careful interpretation of weak positive results is needed.”

The guidance warned against diagnosing someone as having the virus just because he tests positive if he does not present with symptoms of COVID-19. It also warned about the high risk of false positives: “The cycle threshold (Ct) needed to detect virus is inversely proportional to the patient’s viral load. Where test results do not correspond with the clinical presentation, a new specimen should be taken and retested using the same or different NAT technology.”

An even more surprising admission followed: the document described PCR tests merely as an “aid for diagnosis” and did not place any greater weight upon the results of PCR tests. “Most PCR assays are indicated as an aid for diagnosis, therefore, health care providers must consider any result in combination with timing of sampling, specimen type, assay specifics, clinical observations, patient history, confirmed status of any contacts, and epidemiological information.”

The new guidance for assessing the results of PCR COVID tests effectively means that there are additional steps to be taken before reporting that someone has tested positive for the virus. The WHO notes that “a new specimen should be taken and retested” and further stipulates that “health care” workers should weigh up the test result alongside real-world information, such as symptoms or “clinical observations,” and contact with any other infected individuals.

One user on Twitter explained the WHO guidance thus: “PCR positive is no longer = Covid. You are not Covid now unless you get a second test to confirm it, and are presenting clinical symptoms.”

The admission of the inaccuracy of PCR tests comes as a validation for the ever growing evidence of the ineptitude of the tests. As the Lockdown Sceptics website wrote: “For months now, sceptics have been ridiculed for questioning the accuracy of the PCR test, referring to the risk of false positives when prevalence is low and urging the Government to carry out confirmatory second tests on those that test positive. This updated advice from the WHO is a vindication of our position. We look forward to Governments and health authorities bringing their practices into line with it.”

The website’s editor, Toby Young, repeated the sentiment, saying that distrust of PCR tests became “the basis of the smear that we’re covid deniers.” “Today the @WHO finally acknowledged there’s a problem with the PCR test,” he added.

Back in December, LifeSiteNews reported on the fact that 22 independent scientist had debunked the original Corman-Drosten (CD) paper, which established PCR tests as the standard way to determine the presence of COVID-19. The group, termed the International Consortium of Scientists in Life Sciences (ICSLS), studied the CD paper and found “ten fatal problems” with it. Each of the problems is described as being sufficient on its own to render the PCR test “useless as a specific diagnostic tool to identify the SARS-CoV-2 virus.”

One particular issue the ICSLS identified, was the amplification cycle of the tests, which is the process by which genetic material present on the nasal swab is determined to be either a positive or negative indication of COVID. The CD paper did not even define what a positive or negative test result is, but suggested that “45 PCR cycles” are to be performed.

While a PCR test can have up to 60 cycles of amplification, both Dr. Pascal Sacré and the ICSLS pointed out that PCR test data from a cycle value of 35 or more is “completely unreliable.” “Only non-infectious (dead) viruses are detected with [cycle] values of 35,” the group adds, as even above 30 cycles there is “a grey area,” where a positive result cannot be trusted.

A CDC document from as recently as December 2020 outlines that provision was made for tests to be run at up to 40 cycles.

With its new guidance, it seems that the WHO is now heeding, or admitting, Dr. Sacré’s advice about the “misleading … over-sensitivity of the RT-PCR test,” as the organization called for the “careful interpretation of weak positive results,” and reminded clinicians that “[t]he cycle threshold (Ct) needed to detect virus is inversely proportional to the patient’s viral load.”

The WHO also stipulated that the number of cycles used to detect the presence of the virus should be reported along with the test result.

A number of commentators have pointed to the politicized timing of the WHO’s news, noting that the new instructions, which could lead to a decrease in reported COVID cases, came only “one hour” after Joe Biden was sworn in as president. They suggest that Biden could reap the profits of the re-classification of COVID case numbers.

Independent journalist Patrick Henningsen commented on the timing: “Proof of a ‘pandemic’ scam in 2020: the day #Biden is sworn in, WHO magically order #COVID testing laboratories to reduce their #PCR CT cycle threshold – which will automatically slash phony ‘cases’ & ‘deaths with COVID’. #BillGates-funded WHO fraud..”

Trump had began the process to withdraw from the WHO last summer after denouncing the organization as being “China centric.” As such, the WHO was pleased to welcome Biden to the White House as an ally, as he announced his intention to strengthen ties with the WHO. The WHO Director General Tedros Adhanom Ghebreyesus also expressed his own delight at Biden’s recent inauguration.

Conservative outlet PJ Media concurred with Henningsen, claiming that “[n]one of this was for your health. It was to get rid of Orange Man Bad.”