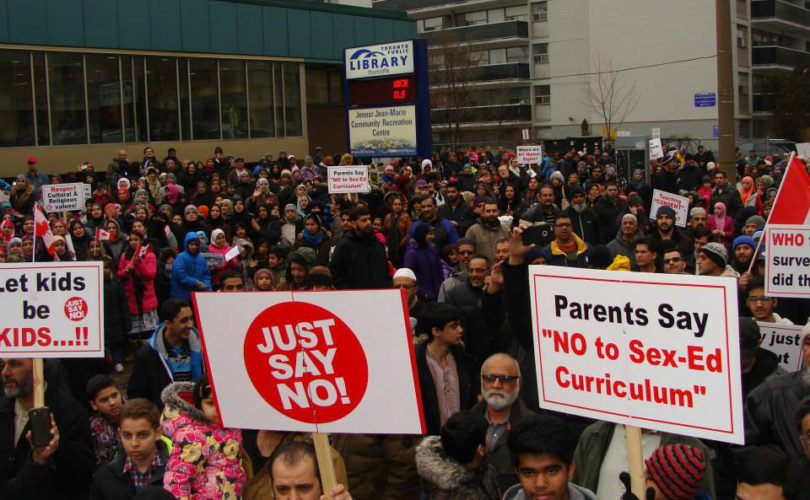 June 9, 2016 (LifeSiteNews) —  One in six Ontario parents who responded to a Forum Poll said they either have or would have withdrawn their children from school because of the Liberal government’s revised sex-ed curriculum.

In a survey of 1,172 Ontario voters, Forum found that three percent of parents had actually pulled their kids from public schools in favour of private or homeschooling for that reason. A further 13 percent stated they would have done so if they had children in elementary school.

That makes “a total of one sixth who have or would take their children out of school because of the curriculum,” notes a May 31 Forum Research summary.

Moreover, just over one-third, or 36 percent, of respondents disapproved of the sex-ed curriculum, while 48 percent approved.

Jack Fonseca, project manager with Campaign Life Coalition, says that the result “proves that Premier Kathleen Wynne and Education Minister Liz Sandals have been lying to the public when they kept dismissing parental outrage over the sex program, and claiming that very few parents have any concerns.”

The poll “confirms what we hear every day when we speak to people in the general public who are still very much concerned about a curriculum written under the direction of a convicted child sexual predator,” says Fonseca, “and which plants adult concepts of sex in the minds of very young children, much too early.”

Fonseca was referring to Ben Levin, who was deputy minister of education in 2009 when as education minister, Wynne released her Equity and Inclusive Education strategy, which included an overhaul of the sex-ed curriculum. The 2010 sex-ed update was shelved by Liberal Premier Dalton McGuinty after parental backlash, but reappeared, virtually unchanged, as Sandals’ 2015 version — with notable additions, including lessons on “six genders.”

Following his arrest in July 2013, Levin was sentenced in May 2015 to three years in prison for three child pornography-related convictions — including counselling to commit sexual assault.

Campaign Life Coalition’s “short term goal, and that of the broader Canadian Families Alliance (CFA) network, is to continue educating parents about the physical, medical, psychological and spiritual harm to children that this sex-ed agenda conceals,” Fonseca told LifeSiteNews.

Ontarians who approve of the curriculum may simply not know what is in it, and “are accepting with blind faith, Kathleen Wynne’s propaganda and lies, fed to them almost daily by the Liberal government’s communications arm, known as the mainstream media,” Fonseca said.

Once people realize “what’s actually in the curriculum” and that the Liberals consulted Planned Parenthood as “sex ed experts” in preparing the program, the 48 percent support “will drop significantly,”  he asserted.

“To that end, there are numerous speakers available from CLC and other groups, to give talks at churches, women’s groups, and men’s groups about this issue,” Fonseca pointed out.

CFA’s “longer-term goal is to keep the fires of parental outrage burning so that repealing the early childhood sex program becomes the main question at the ballot box in 2018,” he said.

“The fact that 36 percent of Ontarians oppose the Wynne/Levin sex program” shows that rescinding it will be “a winning political strategy.”

Forum Research President Dr. Lorne Bozinoff told the National Post that Premier Wynne’s popularity is about 20 percent, and the Liberals continually trail in the polls behind Progressive Conservatives, who are “flirting with a majority of seats.”