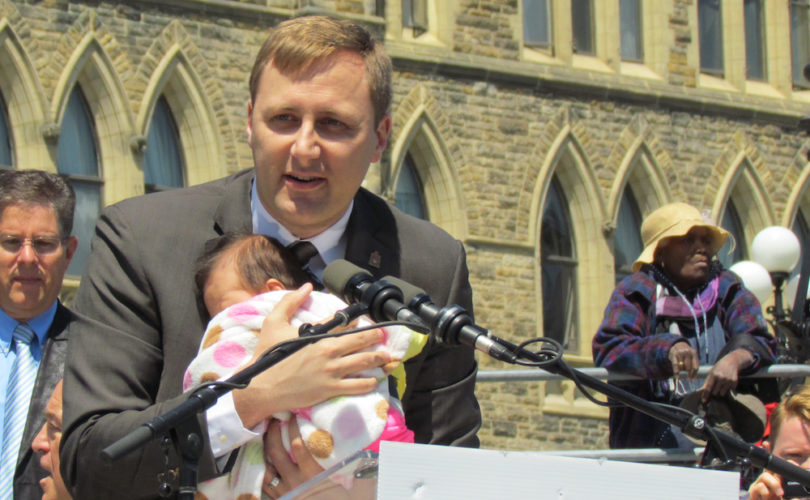 SASKATOON, March 13, 2018 (LifeSiteNews) — One of Canada’s most outspoken pro-life and pro-family politicians has lost his bid to run in his long-held riding for the Conservative Party in the next federal election.

The five-time Conservative MP reportedly lost by 29 votes to Corey Tochor, a two-term provincial MLA who resigned in January as speaker of the Saskatchewan legislature to enter the race.

Trost told the CBC Monday he was defeated “because I was too complacent. I took it for granted and I really didn’t start working until early January.”

He also told CBC that members of the party had endorsed him.

Tochor told the Saskatoon Star-Phoenix when he declared his candidacy that Trost “is rightfully or wrongfully a polarizing figure. I believe after talking to members and the public that we need still a principled voice but a fresh start in how we represent Saskatoon in Ottawa. I believe that’s what I represent.”

“I think Brad did a lot of work, he did all of the right things,” but “a number of his supporters, I guess, didn’t really understand the gravity of the situation and simply didn’t show up to exercise their democratic right to vote,” Ben-Ami told LifeSiteNews.

“This is not an unusual thing,” he added. “People become complacent and there are consequences to complacency.”

Trost said on Facebook Saturday he won’t represent the Conservative Party in the 2019 federal election.

But Ben-Ami says it’s “too early to say” what the future holds for Trost, who has been MP for Saskatoon since 2004, and finished fourth of 13 in the leadership race last May.

“I think everybody, including Brad himself, was surprised by the outcome of the voting on Saturday,” Ben-Ami said.

While Trost currently doesn’t intend to seek the nomination in another riding, Ben-Ami said, “I think it’s fair to say that he’s going to take a period of time to collect his thoughts and when he’s ready to make an announcement with respect to his immediate future plans, then he’ll do that.”

He contended that the “overwhelming majority of members of the [riding] association supported Brad,” and that Trost will continue to be vocal on life issues.

“These are views he holds very strongly, they’re sensible, they’re not radical by any stretch of the imagination and he’s going to continue to speak out on these issues,” Ben-Ami told LifeSiteNews.

Jeff Gunnarson, vice president of Campaign Life Coalition, says his organization is “devastated” at Trost’s loss, but at the same time, the nomination challenge was not unexpected.

“We had heard there is bad blood amongst the weak conservatives within the party ranks and caucus, and not surprised when we heard he was being challenged,” he told LifeSiteNews.

“We are in favour of open nominations — it is democracy at work. But what we don't like is the perceived targeting of staunch and vocal pro-lifers such as Brad and Cheryl [Gallant].”

“Brad is a traditional conservative, a true blue conservative. He has a strong moral character and he doesn’t mince words,” Gunnarson observed. “He is not politically correct and that makes him an anathema in most parties.”

Ben-Ami concurred that Trost’s unapologetic defence of life and family values through his 14 years as an MP didn’t sit well with some Conservatives.

“I do think that there were some people who felt that Brad’s views were out of step — social conservative views — with many people in his riding … and so a couple of challengers came forward,” he said.

It’s reasonable to conclude that Tuchor “probably received some encouragement at a minimum from the party,” in Ben-Ami’s view.

“I think it’s fair to say that a person of that stature would not have stepped down from his position with the legislature and in the caucus in Saskatchewan, without having done a certain amount of due diligence,” he said.

“So I would expect that there have at least been some conversations between him and party officials. Who those party officials were, I couldn’t say.”

Meanwhile, Trost is locked in an ongoing and hotly contested legal dispute with the Conservative Party brass and leadership election committee.

The party alleged that Trost’s campaign leaked his membership list to the National Firearms Association just after the leadership race, and fined him $50,000 in June.

Trost took the matter to court in October, asserting that the allegations were false and injurious to his reputation.

He further argued in his application for a judicial review that the Conservative leadership violated party rules in its investigation, that the Chief Returning Officer did not conduct an inquiry as he should have, and that his list was available to Conservative officials and individuals outside Trost’s campaign.

A hearing on the matter is imminent, but the Conservative Party “is trying to block us from continuing with our case in court,” according to Ben-Ami.

“I don’t think it’s unreasonable to make an assumption that some of these people have been using their power within the party to push forward an agenda that has been not helpful to Brad, and not helpful frankly, to social conservatives.”

“I would encourage him to stay involved in the party locally and opportunities will invariably fall in his lap that may be worth his consideration,” he said.

“And of course if he did run in another riding we would support that completely and would help in all the ways of which we are capable.”

The Star-Phoenix reported in February that an estimated 1,500 members were eligible to vote in the nomination race.

However, Rod Meier, president of the Saskatoon-University Conservative riding association declined to comment.

Sean Osmar, regional political officer for the Conservative Party had not returned a request from LifeSiteNews to confirm numbers of voters in the contest by deadline.