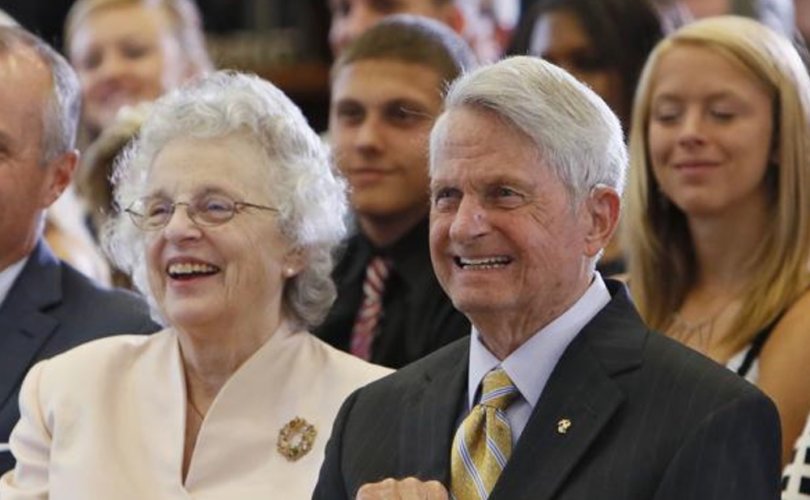 Miller died Friday at age 86, following a battle with Parkinson’s disease. He passed away at home, surrounded by family.

The Miller Institute Foundation announced that services began Monday with a public Memorial on the campus of Young Harris College, continued Tuesday with a Celebration of Life Service at Peachtree Road United Methodist Church, and concluded on Wednesday with a state funeral at the Georgia Capitol rotunda.

“The ranks of socially conservative Democrats are shrinking – and no one was probably more grieved by that than former Georgia senator and Governor Zell Miller,” Family Research Council President Tony Perkins said in a statement. “A passionate, God-fearing and God-loving pro-lifer, Zell was often the lone voice of reason in a party that was starting to lose its way.”

A former Marine, history and political science professor at Young Harris College, and state senator who chaired Democrat Walter Mondale’s 1984 presidential campaign in Georgia, Miller won the governorship of Georgia in 1990, and won reelection in 1994. His successor, Roy Barnes, appointed Miller to fill a Senate vacancy in July 2000, and in November he won the special election to serve the remainder of that term. He declined to run for a second term.

Miller was a popular governor who left that office with an 85% approval rating, but he is most well known nationally for crossing the aisle to support Republican President George W. Bush in 2004.

Miller “was an example of service before self, country before party, principle before poll,” Bush said in a statement. “His strong spirit benefited the people of Georgia and the United States and will be sorely missed.”

He also dissented from his party on a number of issues, including abortion. During a 2007 banquet for the Sav-A-Life Care Center, Miller named abortion as the root cause of several of the United States’ social ills.

“If those 45 million children had lived, today they would be defending our country, they would be filling our jobs, they would be paying into Social Security,” he said. “Still, we watch as 3,700 babies are killed every single day in America. It is unbelievable that a nation under God would allow this.”

In his 2003 book A National Party No More, Miller wrote that he first started questioning his past support for legal abortion with the arrival of his great-grandchildren.

“Even though their young parents struggle tremendously to take care of them,” he said, “I know how richly blessed we are that they were not four of the 42 million who have been aborted over the past thirty years.” He went on to criticize the hypocrisy of abortion supporters who opposed the death penalty, compare abortion-on-demand to the legality of slavery, and express frustration at the increasing pro-life leanings of the younger generation.

“What could be more arrogant than to believe one has the right to designate a life not worth living?” Miller asked.

In his 2005 follow-up A Deficit of Decency, Miller criticized the “untenable” position of his party on the subject.

“No one could be more interested in the potential of stem cell research than I. My mother died from Alzheimer’s,” he wrote. However, he argued that research must focus on the promise of adult stem cells rather than destroying human life to obtain them.

“Because everything God made is good and all of life is precious, the use of embryonic stem cells must be stopped,” Miller concluded. “It is not a proper fate for a human being made in God’s image.”