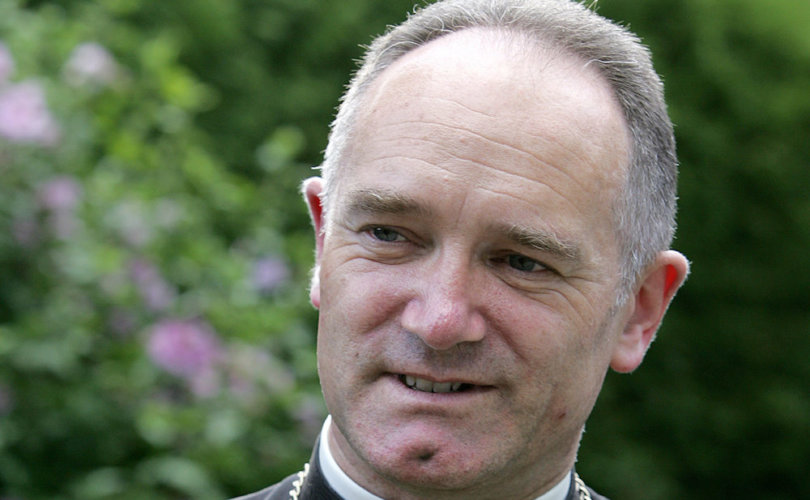 April 1, 2016 (LifeSiteNews) — Of all the people many would assume to be Pope Francis’ greatest enemy, the head of the Society of Saint Pius X would likely hit the top of many lists.  Bishop Bernard Fellay, the head of the SSPX, however has made some remarkably hopeful statements about the Pope, revealing what he sees as Francis’ own embrace of the SSPX.

Rumors of reunification effort have been circulating since Pope Francis’ surprise announcement that the priests of the SSPX would be given permission to hear confessions of all Catholics during the Year of Mercy. Those rumors were proven well founded this week as Bishop Fellay said the negotiations with Rome are moving forward.

The Pope must have someone else in mind when he speaks of “fundamentalist,” “closed,” “authoritarian,” or  “restorationist Catholics,” Bishop Fellay says, because Pope Francis’ attitude toward the SSPX is “you are welcome” in the Church.  And if it seems confusing, it is no less so to Fellay and the SSPX community itself.

“This is really a paradox, almost an attempt to combine opposites,” he says. “It is clear that Pope Francis wants to let us live and survive. He even said to anyone who cares to listen that he would never do the Society any harm.”  The SSPX head recounts that Pope Francis “said that we are Catholics” refusing “to condemn us for causing a schism, saying: ‘They are not schismatics, they are Catholics.’”

The bishop says too that Francis has read and re-read the biography of SSPX founder Archbishop Marcel Lefebvre.

Fellay describes the “benevolence” of Pope Francis toward the Society as “paradoxical” since they are themselves alarmed by Francis in many ways. “In Pope Francis we do not see that attachment either to the liturgy or to the old discipline. … We could even say, quite the opposite,” he said. The Pope, he added, seems to want “to advance toward we might almost say ‘Vatican III’, in the worst sense that could be given to that expression.”

Fellay said he sees a “growing confusion” in the Church that results “precisely from contradictory elements, from the dilution of doctrine, morality and discipline.” He added, “Today we see profound disagreement between the bishops and even in Rome on these questions.”

He rules out “ecumenism” as the source of the Holy Father’s desire for reconciliation with the SSPX.  “Just look at the general attitude of the bishops on this subject of ecumenism: they have their arms wide open to everybody except us!” he explained.

Both Popes Benedict XVI and Francis have worked toward unity, without which, says Fellay, rather than being given a new permission to hear confessions “we would already be laboring once again under penalties, censures, excommunication, the declaration of schism, and that whole attempt to eliminate a bothersome group.”

For Pope Benedict, suggests Bishop Fellay, the benevolence toward the Society lay in “his love for the old liturgy, his respect for the previous discipline in the Church.” But for Francis that does not apply.

For Francis, Fellay suggests, one explanation is the Holy Father’s preference for “anything that is marginalized, what he calls the ‘peripheries of life.’ …  I would not be surprised if he considered us as one of these peripheries.” In addition, the SSPX leader says he and his confreres have always been very frank with Pope Francis, “hiding nothing” not even their disagreements. “I think that [Pope Francis] likes that.”

Additionally, the SSPX head suggests the Pope sees in the Society an evangelical spirit lacking in the mainstream Church.  Bishop Fellay sees the Pope “rather constantly critiquing” the establishment Church—“reproaching the Church for being self-satisfied, a Church that no longer looks for the lost sheep, the one that is in trouble, at all levels.”  This concern, says Fellay, is beyond the material. “We see very well that when he says ‘poverty’ he includes also spiritual poverty, the poverty of souls that are in sin, that should be brought out of it and led back to the Dear Lord.”

“And from this perspective,” says Fellay, “[the Pope] sees in the Society a community that is very active—especially when compared to the situation in the establishment—very active. In other words it seeks and goes out seeking souls, it has this concern about the spiritual welfare of souls, and is ready to roll up its sleeves and work for it.”

As to the future of the Society’s reconciliation with Rome, Bishop Fellay remains cautiously optimistic but uncertain. He attributes ultimately to Divine Providence the paradox of the current situation, which has the Society closer to being recognized than ever before. He wonders however if the Pope will have the final say on the matter. In 2012, when Pope Benedict had forged an agreement with the Society, the agreement was altered at the last minute by a higher authority, but not the Pope. Which led Bishop Fellay to wonder: “Who is governing the Church? I would say that it is a very interesting question that remains unanswered. There are undefined forces….”