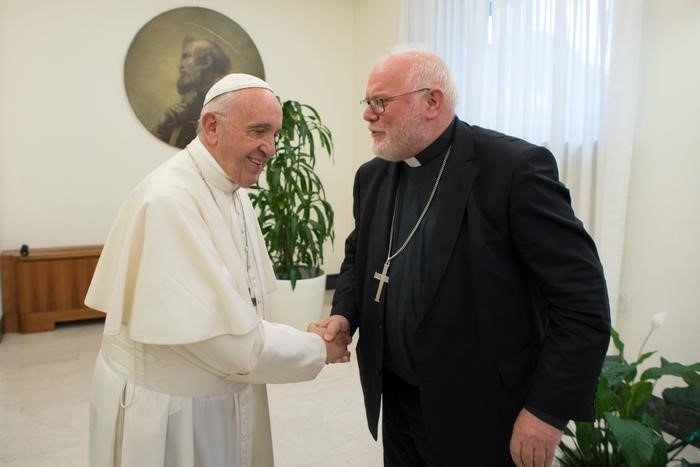 February 4, 2018 (LifeSiteNews.com) – Cardinal Reinhard Marx, chairman of the German Episcopal Conference and close advisor of Pope Francis, has told the German media that “one must encourage priests” to give encouragement to homosexual unions, which could include public blessings that would take a “liturgical” form.

Marx was asked in a radio interview yesterday why the Catholic Church “does not always move forward when it comes to demands from some Catholics regarding, for example, the ordination of female deacons, the blessing of homosexual couples, or the abolition of compulsory celibacy [for priests].”

Marx responded that “closer pastoral care” must be given to homosexuals, adding that “one must also encourage priests and pastoral workers to give people in concrete situations [of homosexual unions] encouragement. I do not really see any problems there.”

This “encouragement” might include some sort of “liturgical” recognition of their union, according to Marx, who said that “how this would be done publicly, in a liturgical form,” is “another question,” adding, “that is where one has to be reticent and also reflect upon that in a good way.”

Marx was asked by the interviewer if he meant that he could “imagine a way to bless homosexual couples in the Catholic Church,” and the cardinal responded “yes.”

However, Marx added that no general rule should be established for such blessings, which should be left up to the judgment individual pastors.

“There are no general solutions. I don’t think that’s right, because this is pastoral care for individual cases, which I have to leave to the pastor . . . there are things that cannot be regulated,” said Marx.

Marx’s words echo those of the Vice President of the Episcopal Conference of Germany, Bishop Franz-Josef Bode, who brought up the possibility of blessing homosexual unions on January 10, and referred to such unions as “positive and good.”

“How do we do justice to them (homosexual couples)?” asked Bode. “How do we accompany them pastorally and liturgically?”

“We have to reflect upon the question as to how to assess in a differentiated manner a relationship between two homosexual persons,” said Bode. “Is there not so much positive and good and right so that we have to be more just?”

Earlier this month, Von Gersdorff wrote of Bodes’ proposal: “German progressivism does not wish a few things changed here and there, but it wishes to scrap the whole of Catholic teaching and to create a fundamentally new religion . . .The ‘normal’ Catholic is perplexed and asks himself: How far can the Catholic Church in Germany continue this path of destruction and still be called ‘Catholic’? When does it come to the point that there exists the moral duty to refuse to pay the Church tax?”

Reinhard Marx is arguably the most influential Catholic prelate in Germany. In addition to overseeing the massive archdiocese of Munich and Freising with its 1.7 million Catholics, he is the chairman of Germany’s bishops’ conference, and President of the Commission of the Episcopal Conferences of the European Community (ComECE). He is also one of the nine members of the Council of Cardinal Advisers, who are charged by the pope with reorganizing the Roman curia.

“We have to respect the decisions of people. We have to respect also, as I said in the first synod on the family — some were shocked, but I think it’s normal — you cannot say that a relationship between a man and a man, and they are faithful, [that] that is nothing, that has no worth,” said Marx in June of 2016.

Marx added that the state “has to regulate these partnerships and to bring them into a just position, and we as church cannot be against it.”

Marx’s comments were condemned at the time by South African cardinal Wilfrid Fox Napier. “God help us! Next we'll have to apologise for teaching that adultery is a sin! Political Correctness (PC) is today's major heresy!” Cardinal Napier tweeted.

The Catholic Church condemns all homosexual acts as gravely sinful, thus meriting eternal damnation. The Catechism of the Catholic Church states, “Basing itself on Sacred Scripture, which presents homosexual acts as acts of grave depravity, tradition has always declared that ‘homosexual acts are intrinsically disordered.’ They are contrary to the natural law. They close the sexual act to the gift of life. They do not proceed from a genuine affective and sexual complementarity. Under no circumstances can they be approved.”

The Vatican’s Congregation for the Doctrine of the Faith expressly prohibited any support for homosexual unions in 2003, stating, “In those situations where homosexual unions have been legally recognized or have been given the legal status and rights belonging to marriage, clear and emphatic opposition is a duty,” and that “all Catholics are obliged to oppose the legal recognition of homosexual unions.”

‘We have to judge acts’: Vatican’s Cardinal Burke dismantles ‘Who am I to judge?’